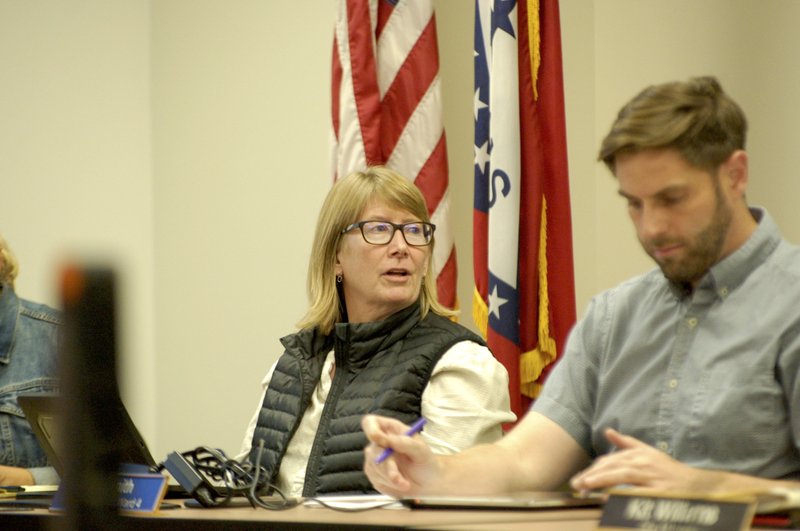 NWA Democrat-Gazette/STACY RYBURN Teresa Turk (left), Fayetteville City Council member, answers questions Tuesday during a council meeting at City Hall while fellow Council Member Kyle Smith looks up information on a tablet computer. Turk sponsored a proposal to ban the use of expanded polystyrene foam products by restaurants or food and drink providers in the city.

FAYETTEVILLE -- Food and beverage establishments would have seven months to use up any expanded polystyrene foam products they have and provide customers to-go containers of a different material under a proposal the council saw Tuesday.

A proposed ban on expanded polystyrene foam products, commonly known as Styrofoam, would take effect May 1 if enacted by the Fayetteville City Council. The proposal states: “No single-use expanded polystyrene foam product including plates, bowls, clamshells, cups and similar products may be provided by any restaurant, hotel, grocery store for its deli or food bar, cafeteria, convenience store, coffee tea or donut shop, caterer or other prepared, ready-to-eat food or drink provider.”

Food service providers, including restaurants, food trucks and coffee shops, would be subject to the ban. Retailers, such as grocery stores, wouldn't be banned from selling expanded polystyrene foam products but couldn't give out those containers in their delis, for instance.

In May, the council decided the city government wouldn't use expanded polystyrene foam anymore, nor would those products be sold on city property. The following month, the council launched a study with the intention to regulate the material in some way citywide.

It's time Fayetteville joins the hundreds of other cities that have banned expanded polystyrene foam, Turk said.

"From what I've heard, most people are for this," she said. "We need to make this change."

City staffers put out a survey to gauge interest in regulating the material. More than 2,000 residents and about 150 businesses responded. The survey was open at the city's online Speak Up portal July 7 to Aug. 21.

Seventy-six of the 150 business respondents said they would support banning expanded polystyrene foam as a way to reduce litter in the city. Ninety-one said they would like for the city to provide educational material and resources on where to buy cost-effective, compostable or recyclable products. Forty selected "other." Respondents didn't have to pick only one answer.

Leif Olson, long-range planner with the city's Sustainability Department, said if the council adopts the proposal, city staff will have to work through how it would be enforced. The system likely would be complaint-driven, such as with other city codes, he said. The ban would only apply to expanded polystyrene foam, not clear plastic cups and clamshells.

Several food establishments, including chain restaurants, in the past few years have recognized the value of switching from expanded polystyrene foam, Olson said.

"It's one of those things that people notice, and maybe they will patronize places that are trying to do a better job of selecting materials that aren't as detrimental to the environment," he said.

The city also hopes to launch a residential compost program to go with the timing of the ban, said Brian Pugh, waste reduction coordinator. Compostable containers won't biodegrade in someone's back yard, but the city's compost facility can handle them, he said. There's a compost pickup program in place for businesses.

City officials also are looking into setting up compost drop-off sites to go along with the recycling drop-off sites, Pugh said. The city's compost facility is on South Armstrong Avenue.

City Attorney Kit Williams said violators of the expanded polystyrene foam ban would be subject to a $500 fine, which is the general penalty written into city code. Continual violation would be $250 per day. Those charges would have to be filed in district court to apply, he said.

The City Council will take up the proposal for the first time at its meeting Tuesday. It will have to be read three times before it can be adopted.