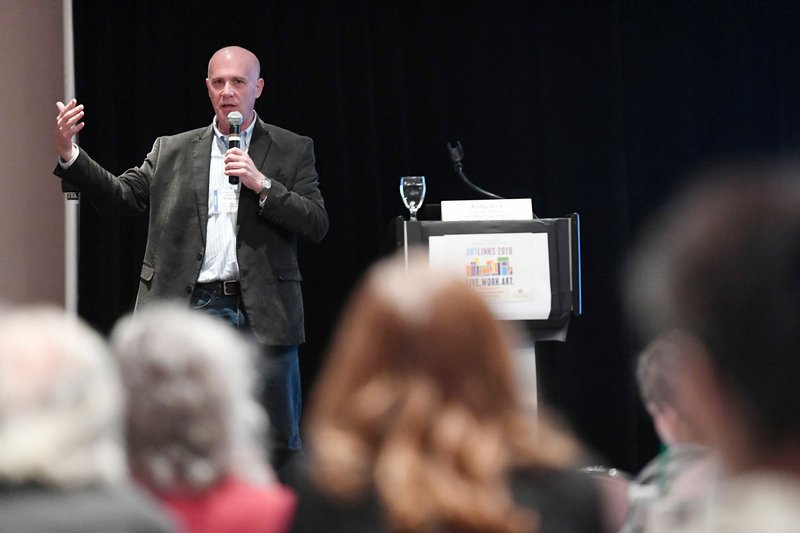 NWA Democrat-Gazette/J.T.WAMPLER Andy Vick, executive director of the Cultural Office of the Pikes Peak Region in Colorado Springs speaks Tuesday at Artlinks 2019 conference at the Graduate Hotel in Fayetteville. The event was sponsored by the Arkansas Arts Council.

FAYETTEVILLE -- About 100 art administrators, artists, foundation representatives and other interested parties spent three days discussing the benefits of the advancement of the arts in Arkansas.

They participated in the 2019 Artlinks conference hosted by the Arkansas Arts Council.

The Unexpected will be offered in Fort Smith through Saturday and brings surprising contemporary and public art to the city. A complete list of events, activities and featured artists is available online a unexpectedfs.com.

"We focus on education in the arts, exposing Arkansans from cradle to grave to the benefits of the arts in their lives," said Patrick Ralston, director of the council. "We also work very closely with arts organizations."

The council biannually hosts the conference, which was last held in Northwest Arkansas in 2015, he said.

"There's a lot going on, certainly in Northwest Arkansas," he said, noting the region was the right location to feature the conference this year.

The conference theme was "Live. Work. Art." and focused on ways for participants to better understand how they can contribute to the vitality and economic development of arts in their communities.

"The arts are an incredibly powerful economic engine," Ralston said, adding it's important to link the arts with a community's creative economy.

He described the creative economy as the marketplace of artistic creativity, products and ideas applying to everything from culinary to the performing arts.

"We're fairly expansive in the way we describe it," Ralston said.

Andy Vick, executive director of the Pikes Peak Region Cultural Office in Colorado Springs, Colo., was the keynote speaker. Vick spoke Tuesday on creating a unique identity for communities through the arts.

"The arts are extremely important from an economic standpoint," he said. "Using art as a way to build community is definitely something that works."

Steve Clark, CEO and founder of 64.6 Downtown in Fort Smith, spoke Monday about how the nonprofit group has helped stimulate the city's creative economy through The Unexpected, an annual event.

Artists from throughout the world paint surprise projects on walls and buildings during the event happening this week.

The Unexpected began in 2015 and has placed public art in more than 45 locations, said Claire Kolberg, event co-founder.

Kolberg described the city prior to the event as having "a lot of shades of brown."

The event gets businesses involved in what's unfolding creatively in a community, Clark said, and leads people to identify art with the business on which it's displayed. That awareness increases the business' profit and awareness of what they offer, he said.

Tim Allen, president and CEO of the Fort Smith Regional Chamber of Commerce, said the murals have brought new life to the city and many people visit just to see the art.

"It brings a whole new level of diversity and intentional attention to Fort Smith that we haven't had before," Allen said.

The increase in public art and the attention it's getting has also led to new businesses and storefronts opening in Fort Smith, he said.

"We see the activity is on the upswing, which is really exciting," Allen said. "That added cool factor goes a long way."

Siloam Springs is also embracing public art as a means of revitalizing its downtown district through a partnership with the University of Arkansas' School of Art.

That networking opportunity inspired a long-term public art project the collaborators spoke about at the conference.

Four locations have been chosen to display sculptures by UA students, she said.

The project has sparked the interest of many students who're from the region, Jones said.

"It's very different to start considering your own community where you grew up and the art you'd like to see in your downtown," she said.

Creating public art speaking to a community's residents is an important aspect of developing a city's creative economy, Vick said.

"You've got to do what's relevant and right for your community," he said. "Those are the things that are going to resonate."

Jones is working with the students to focus their project submissions on the community, she said.

"These are people who are going to experience it every day," she said of the 3D projects that will vary in size, shape and material.

The first four projects will be chosen in January, Howard said. Students will each receive a $1,500 stipend to create their projects, which will be installed in fall 2020.

New sculptures will be selected and installed annually to contribute to the downtown creative economy, Howard said.

The university offers a sustainable source of artistic talent, she said, creating an opportunity for an enduring conversation on public art and a long-lasting relationship between the university and the city.

"Communities are often brought together through art and collaboration," Jones said. "Our students want these opportunities."

What's transpiring in Siloam Springs is a great example of how to take next steps following the conference, said Debra Fithen, grants manager with the Department of Arkansas Heritage.

The department is responsible for preserving, promoting and protecting Arkansas' natural and cultural history and heritage.

"The biggest benefit for Artlinks is to have leaders of arts organizations, individual artists, people that have put their attention and their money into the arts and their energies into the arts to get together and share ideas," Ralston agreed. "It's a great networking opportunity. It's the free market of ideas."