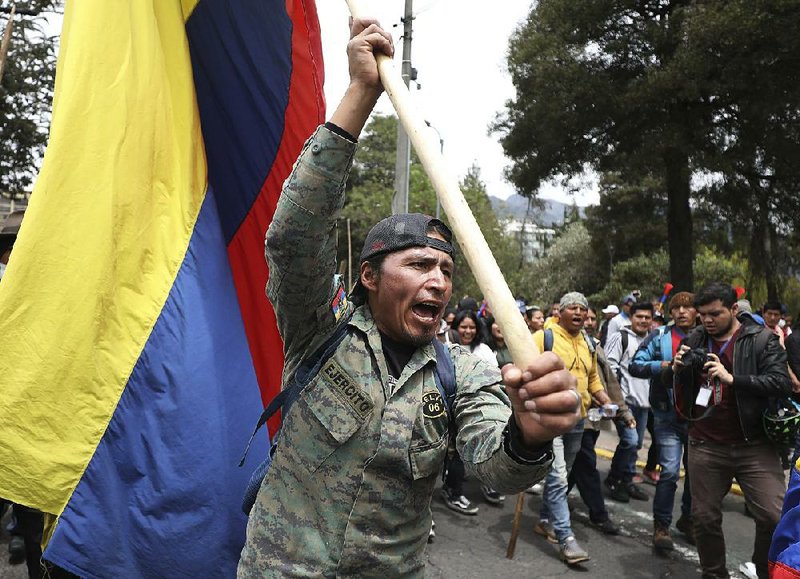 Indigenous anti-government demonstrators arrive Tuesday in Quito, Ecuador, to join other indigenous groups protesting against President Lenin Moreno and his economic policies. Moreno imposed a number of measures — part of an austerity plan imposed by the International Monetary Fund — that have caused a spike in fuel prices, enraging many people who have suffered years of economic malaise as Ecuador has sunk into billions of dollars of debt. More photos are available at arkansasonline.com/109protests

GUAYAQUIL, Ecuador -- President Lenin Moreno of Ecuador moved the seat of his government from Quito, the capital, to the coastal city of Guayaquil late Monday in an attempt to protect his government from the large demonstrations against austerity measures that have racked the country over the past week.

Ecuador has been in turmoil since Moreno announced a number of measures last week -- part of an austerity plan imposed by the International Monetary Fund -- that are meant to lower debt and prime the economy for growth. Elected in 2017 as a successor of his one-time mentor, former President Rafael Correa, Moreno has since moved away from his leftist policies.

In Quito on Tuesday, large groups of masked demonstrators clashed with police, breaking several barricades and approaching the presidential palace at the heart of the city's historical center.

The decision that most inflamed protesters was the end of a fuel subsidy that had been in place for 40 years, but which Moreno claimed cost the country $1.3 billion a year.

[Video not showing up above? Click here to watch ª https://www.youtube.com/watch?v=C9bSw5vAvms]

Moreno followed initial protests by the transportation unions by declaring a state of emergency that allowed the suspension of certain civil liberties. It also allowed him to move the president's seat away from Quito -- a measure that has never been taken before.

Moreno made the announcement during a very brief televised appearance from Guayaquil, flanked by the vice president, the minister of defense and the chiefs of the military forces -- a signal to Ecuadorians that his government counts on the support of the army.

The president claimed that his former ally and now adversary, Correa, had orchestrated the demonstrations in order to destabilize his government. He also suggested that Correa was working with Venezuela's president, Nicolas Maduro.

"What's happening these days in Ecuador is not a social manifestation of dissatisfaction and protest in the face of a decision by the government," Moreno said. "The sacking, the vandalism and the violence demonstrate that there is an organized political intention to destabilize the government and break with order, with democratic order."

During the day Monday, the march toward Quito turned violent, with incidents of looting -- including the facilities of 31 flower-exporting companies, according to an exporters association -- and attacks on field workers and farmers who refused to join the march.

Juan Sebastian Roldan, the president's chief of staff, said in a news conference Monday that indigenous leaders, who are marching with tens of thousands of people toward the capital, had lost control over their people, and that the march had been infiltrated by Correa's supporters to create chaos.

"Indigenous people have never sacked nor robbed during their protests," Roldan said. "Stop this infiltrations. The ones doing this are those who wanted to turn Ecuador into Venezuela."

Moreno insisted during Monday's news conference that he would not bring back the subsidies and called for a "fraternal dialogue."