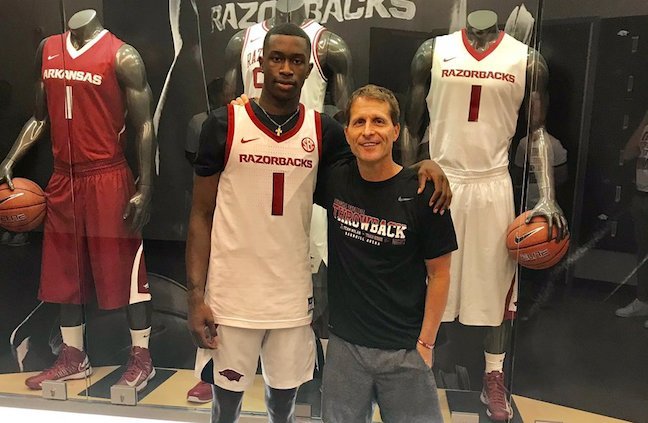 Jacksonville senior point guard Davonte Davis received an Arkansas offer after talking to coach Eric Musselman and assistant Corey Williams during a visit to his school on Wednesday.

Davis, 6-4, 175 pounds, was committed to Oklahoma State, but reopened his recruitment last week. He took an unofficial visit to Fayetteville for the Red-White game last Saturday.

"It felt good, an offer from my home state," Davis said. "My grandparents were happy as well."

Musselman told him and his grandparents about how the Razorbacks want him.

"They let me know how important I was in going to the University of Arkansas," Davis said. "It felt really good how he explained everything, and I feel like if I come to Arkansas he'll push me to my maximum ability. I like that about him the most."

Davis averaged 12 points, 4.1 rebounds and 2.4 assists in Nike EYBL play while being hampered by a knee injury. He also averaged 18.4 points and 4.8 rebounds at Peach Jam in July.

ESPN rates Davis a 4-star recruit, the No. 18 shooting guard and the No. 79 overall prospect in the nation for the 2020 class.

He said there was a temptation to pledge to Arkansas.

"Of course. My grandmother and all them would love for me to, but I have to make sure everything is just right and put in place before I make any commitment," he said.

Davis said after Saturday's visit he planned to take his five official visits, but is not certain now.