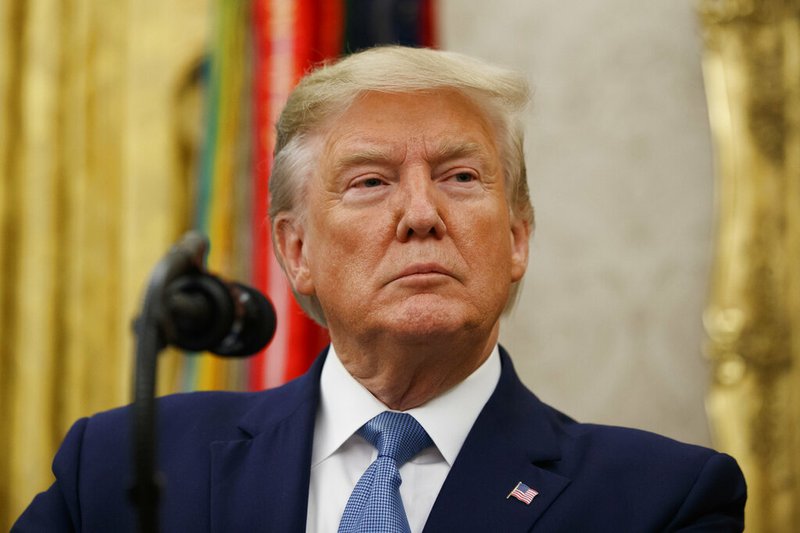 President Donald Trump pauses before speaking during a ceremony to present the Presidential Medal of Freedom to former Attorney General Edwin Meese, in the Oval Office of the White House, Tuesday, Oct. 8, 2019, in Washington. (AP Photo/Alex Brandon)

Efforts to oust Trump are partisan and counterproductive, the lawmaker from Dardanelle told the Arkansas Democrat-Gazette.

House Democrats have criticized Trump for asking Ukraine and China to investigate one of the 2020 Democratic presidential front-runners -- former Vice President Joe Biden.

"Democrats say everything this president does is inadvisable, inappropriate, offensive, but I don't think many Arkansans believe it's impeachable," Cotton said. "I hope the Democrats come to their senses and stop what is an increasingly partisan inquiry and get back to doing the people's business. And there's a lot of important business to do."

The list of neglected work, Cotton said, is long.

"We haven't passed the annual defense bill; we haven't passed the spending bills. ... The House is the only stumbling block right now between ratifying the Mexico-Canada trade agreement, which would be so important for Arkansas and, really, the entire country," he said.

"It's hard to see us having much progress on those fronts with the House Democrats. House Democrats are obsessed with impeaching the president all the time."

"There are legitimate institutional differences between the Congress and the executive branch that always play themselves out," he said.

"The President is not required to cooperate in an unofficial process that's designed to undermine his authority," the lawmaker from Jonesboro said in a written statement. "If [House Speaker] Nancy Pelosi and [Committee Chairman] Adam Schiff were at all serious about impeachment proceedings, they would make it official by putting articles of impeachment on the floor for a vote."

At a news conference Tuesday morning, Gov. Asa Hutchinson was asked about Trump refusing to turn over documents and make people available to testify in the impeachment inquiry and the president's comparing the inquiry to a "kangaroo court."

"Whenever you look at the process the House is going through, there traditionally has been disputes over what is executive privilege, what is not. Sometimes these have to be resolved by the courts," he said.

"I think there is, as I said before, legitimate questions that have been asked based on the whistleblower complaint. That whenever we have a conversation with Ukraine leadership and we get into internal politics, this raises a lot of questions whenever there is foreign aid as an issue as well. So I think those questions [are] appropriate to be asked and to be looked at.

"I think the conversation was unwise, but it is a very serious thing to remove a president as the House is trying to investigate. I think there is not the support among American people at this time for that, so questions have to be answered ... but I hope that the House will act very carefully and not make it partisan, but to simply look at the facts and try to get the answers and then they can make a decision of where from there."

Asked about Trump asking for China's help in digging out reports of corruption involving Biden, Hutchinson said "I don't know if he were serious or not.

"Half of the things that he says seems to be to catch people's attention or to startle folks. But, no, I don't believe we ought be asking for China's help in terms of an investigation.

"But it is very important that a case is made that we ought to [and] it is appropriate to utilize our countries to carry out legitimate investigations of corruption. Those communications generally go through the attorney general, justice department channels. But I think we need to de-escalate some of the rhetoric in terms of our international relations and try to get back to business and try to focus on our trade disputes that we need to resolve. That to me is a high priority with China."

With Congress in the second week of its October recess, Cotton is traveling across a wide swath of the state.

Print Headline: Cotton: Inquiry into impeaching no risk to Trump