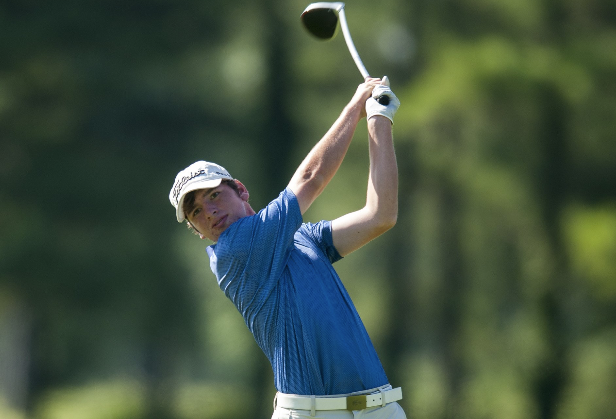 Palmer McSpadden drives during the semifinals round of the 2019 Arkansas Junior Match Play at Eagle Hill Golf and Athletic Club in Little Rock on Friday, July 26, 2019. - Photo by Jeff Gammons

Four players shot sub-80 rounds for Bentonville to help the Tigers lead the field by four shots after the opening round of the Class 6A boys state golf tournament Tuesday at The Greens at North Hills in Sherwood.

Bentonville's Phisher Phillips shot a 2-over 73, which tied him for the lowest round of the day with Fayetteville's Palmer McSpadden. Michael Senn fired a 4-over 75, and Murphy Allard and Alexander Apolskis each carded 6-over 77s to aid Bentonville, which finished at 18-over 302 as a team for a four-stroke lead over Fayetteville.

"Very impressed with the guys," Bentonville Coach Kent Early said. "It was an endurance test. They had some moments, but they battled through it. It's a credit to them. They're prepared for it."

Behind Bentonville and Fayetteville, Little Rock Catholic sits in third after a 28-over 312. Cabot is in fourth with a 31-over 315, and North Little Rock is in fifth with a 35-over 319.

Rounding out the top eight were Bryant in sixth (327), Conway in seventh (332) and Fort Smith Southside in eighth (340). The top eight teams from Tuesday's first round advance to today's final round.

"I think it's anybody's game out here on this course," Catholic Coach Brian Loeb said. "The way this course plays and as fast as these greens are, I mean, it's really up for grabs at this point."

Phillips had a rough start, opening with a double bogey and bogey on his first two holes, but he played his final 16 holes in 1 under.

"I've been striking it very well throughout this year," he said. "My putting's [been] a little slow, but it's gotten a lot better in the past few weeks, [been] chipping it great all year, so I felt pretty good going into it."

McSpadden, who's tied for the individual lead with Phillips, also struggled early and was 4 over through 10, but he rebounded and played his final eight holes in 2 under.

"I felt like I played pretty solid, and I'll take it for this course. I just didn't really score as well as I wanted to," McSpadden said. "There were a couple of putts that I missed, but I'm happy with the way I came in, because I was 4 over through 10, and I was able to play pretty good on the back nine."

McSpadden's Fayetteville teammate Sam Tandy had a one-shot lead at even par after he made birdie at the par-5 12th, but he stumbled coming in with two double bogeys on the card over his final five holes. He finished with a 3-over 74 thanks to a birdie at the par-5 18th, putting him in a tie for third with Cabot's Caleb Miller.

"If you put yourself in the wrong spot out here, you're pretty much done," Tandy said.

Miller also made birdie at the 18th to post a 74. Like many players and coaches, Miller noted how difficult the greens at North Hills are to attack and putt on.

"They're small greens with a lot of slope and undulation to them," Miller said. "They got them pretty fast for the tournament, and there can be some really tough pin locations out here."

Elsewhere in the individual standings, Senn and Catholic's Nash Johnson are tied for fifth at 4 over; Catholic's Jake Daniel sits in seventh at 5 over; and Allard, Apolskis, Bryant's Daniel Taylor and Fayetteville's Max Gardner are tied for eighth at 6 over.

Print Headline: Class 6A field tight after first round