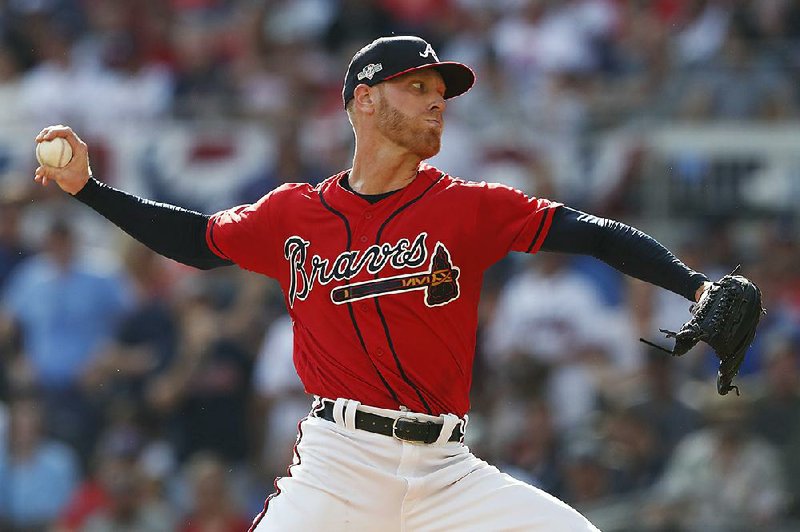 Mike Foltynewicz takes the mound for the Atlanta Braves today as they take on the St. Louis Cardinals in a winner-take-all Game 5 of their National League division series at SunTrust Park in Atlanta.

ATLANTA -- The Braves are back in Atlanta for a decisive postseason game.

That's not necessarily a good omen for the home team.

Over the years, Atlanta has been the place where other teams come to celebrate in October.

The St. Louis Cardinals hope to continue that trend when they face the Braves in Game 5 of the National League division series today.

"I was just a little kid when that happened," Braves shortstop Dansby Swanson said with a shrug. "History is history. We're in the moment now. This is a completely different and new team."

Indeed, Swanson was just 7 years old when Atlanta began a streak of nine consecutive postseason-round losses with a five-game setback to Arizona in the 2001 NL Championship Series.

Still, it's impossible to ignore that the Braves are just one series loss away from equaling an ignominious record set by the Chicago Cubs, who lost 10 series in a row between 1908 and 2003.

Chicago finally ended its playoff misery in Game 5 of the 2003 NL division series -- at Turner Field, of all places. In fact, it became a bit of a running gag that one of baseball's most popular spots for celebratory pictures was the pitcher's mound in Atlanta, with the center-field scoreboard in the background, since nine visiting teams eliminated the Braves at their previous ballpark, with the Cardinals doing it twice.

The move to SunTrust Park in 2017 didn't change Atlanta's fortunes.

Last season, the Braves were closed out at home by the Los Angeles Dodgers in Game 4 of the NLDS.

"I don't think any of those guys in there think about any of that," Manager Brian Snitker said. "Most of them don't remember it. They were probably in grade school. And they talk about that -- well, you haven't won a playoff series, whatever -- and again I say, we haven't won one in a year as far as I'm concerned."

The Braves came within four outs of finishing off the Cardinals in St. Louis, only to lose 5-4 in 10 innings.

Perhaps it was only appropriate that this best-of-five series comes down to a winner-take-all contest. Three of four games have been decided in the final inning. The margin between the teams has been two runs or fewer in all but three of 37 innings.

"This has been an unbelievable series," Snitker said. "My God, both teams just banging at each other and the close games and the late-inning heroics. It's been something. It's been exhausting."

The pitching matchup will be a rematch of Game 2, when Atlanta's Mike Foltynewicz outdueled Jack Flaherty of the Cardinals for a 3-0 victory.

Foltynewicz, an All-Star in 2018 who was demoted to Class AAA for more than a month after getting off to a terrible start, pitched three-hit ball over seven innings in another stellar performance for his tale of two seasons. He was 6-1 with a 2.65 ERA in 10 starts after returning from the minors, and he carried that form right into the postseason.

Flaherty had one of the great second halves in baseball history and pitched well in his playoff debut. But a two-run home run by pinch-hitter Adam Duvall sealed the victory for the Braves, marking only the second time since the All-Star break that the 23-year-old right-hander gave up as many as three runs in a start.

The way both guys pitched Friday, Game 5 figures to be another nail-biter.

"It's going to be fun," Flaherty said Tuesday after the Cardinals arrived in Atlanta. "Come on, you got Game 5, win or go home. What's not to be excited about?"

Considering his third through seventh hitters are a combined 10 of 70 (.143) with 1 home run and 3 RBI, Snitker might shake things up in Game 5.

Duvall, who is 3 of 7 with 5 RBI off the bench, is a logical candidate to get his first start.

The Cardinals are getting plenty of production from their two big boppers.

Marcell Ozuna is hitting .471 with 2 home runs and 4 RBI, while Paul Goldschmidt has also gone deep twice while posting a .438 average.

"It's nice to have the two big pillars of your lineup in good places and doing damage," St. Louis Manager Mike Shildt said. "They're both in a great spot."