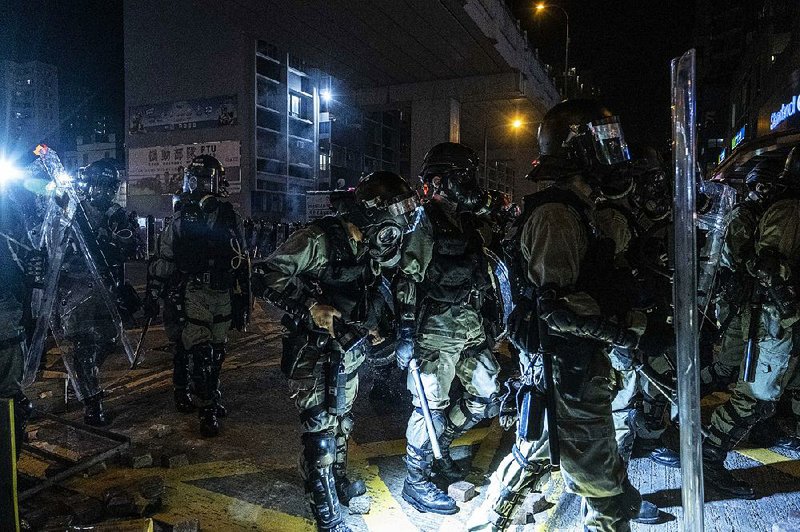 Riot police patrol the streets of Hong Kong on Monday night as the city faces increasingly contentious protests. Groups of demonstrators, angered by a ban on face masks at rallies, gathered to set up road barriers, smash traffic lights and vandalize subway stations. Police responded by firing tear gas and charging at the crowds.

HONG KONG -- Riot police fanned out across Hong Kong on Monday night as groups of hard-line protesters took to the streets in continued violence since the government banned face masks at rallies, pushing the semi-autonomous Chinese territory into deeper crisis.

The scenes in at least six locations across the city have almost become the norm, with groups of black-clad youths setting up road barriers to block traffic, smashing traffic lights and shops linked to China, and breaking into and vandalizing shuttered subway stations.

Riot police fired tear gas, charged at crowds and took position on streets. A number of protesters were detained. The night violence broke the day's relative calm, when hundreds of people gathered in several malls to sing protest songs and chant slogans.

Hong Kong leader Carrie Lam warned today that the Chinese military could step in if the violence continues to escalate, but she reiterated that the government still hopes to resolve the crisis on its own.

[Video not showing up above? Click here to watch » https://www.youtube.com/watch?v=iMZxiYO8L1U]

Lam urged foreign critics to accept the reality that the four months of protests, marked by increasing violence, no longer represents "a peaceful movement for democracy."

After invoking emergency powers to ban people from wearing masks at rallies, Lam wouldn't rule out other measures, including calling for Chinese intervention.

"I still strongly feel that we should find the solutions ourselves," Lam said today, "but if the situation becomes so bad, then no options could be ruled out if we want Hong Kong to at least have another chance."

The mask ban, which took effect Saturday under an emergency law, has led to more anger instead of deterring the anti-government demonstrations that have rocked the international financial hub for four months.

"Wearing a mask is not a crime!" has become a new battle cry at daily rallies that have degenerated into skirmishes between police and hard-core protesters.

Earlier Monday, an 18-year-old student and a 38-year-old woman became the first to be prosecuted under the mask ban, which is punishable by up to a year in prison and a fine.

Detained early Saturday shortly after the ban took effect, the two were also charged with taking part in an unlawful assembly, which carries a heavier penalty of up to five years in jail. They were both released on bail pending trial.

"I am wearing a mask to come here today ... this is a form of silent protest," said 16-year-old student Bao Yeung, who was among a large group of supporters outside the court.

The protests were sparked by a now-shelved bill that would have allowed some criminal suspects to be sent to mainland China for trial but have since morphed into a larger anti-government movement. Protesters are upset at what they say is Beijing's increasing influence over the former British colony, which was promised a high level of autonomy when it returned to Chinese rule in 1997.

Sunday's protest also drew a first warning from the Chinese military after some demonstrators shined laser pointers at one of its barracks in Hong Kong. Police said rioters also attacked bystanders, including two men left unconscious after bloody beatings and a woman who took photos of rioting.

In a statement Monday, police said the "public order of the whole city is being pushed to the verge of a very dangerous situation." The chaos has led many shops and public services to close and prompted panic buying in some areas.

The city's MTR network of subways and trains, which was entirely shut down Saturday and most of Sunday, reopened partially on Monday, a Chinese public holiday.

Information for this article was contributed by Johnson Lai and Nadia Lam of The Associated Press.