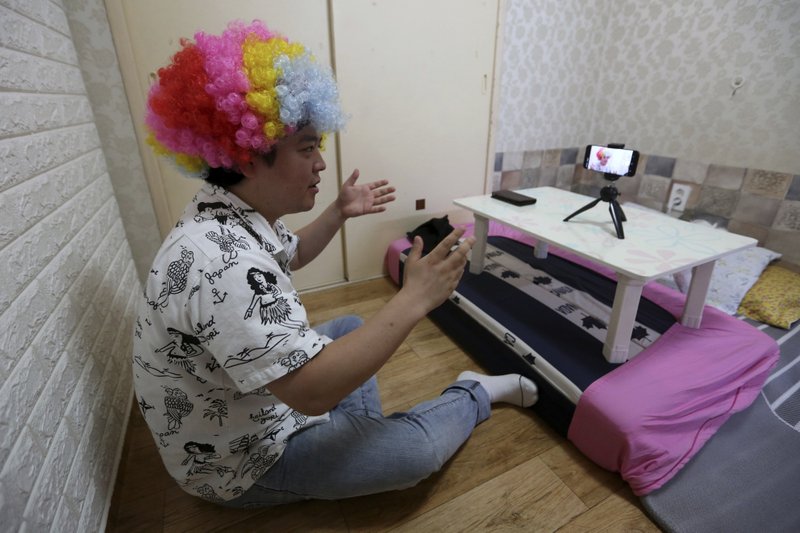 North Korean refugee Jang Myung-jin films himself in a demonstration of his YouTube broadcast during an interview at his house in Seoul, South Korea in this July photo. The 32-year-old Jang is among a handful of young North Korean refugees in South Korea who have launched YouTube channels that offer a rare glimpse into the everyday lives of people in North Korea, one of the world's most secretive and repressive countries. (Photo by Ahn Young-Joon via AP)

SEOUL, South Korea — Wearing a fedora, Jang Myung-jin shouts "Hello, comrades!" as he starts his YouTube broadcast, titled "A North Korean man, Tango." Then, he talks about whether North Koreans raise pet dogs, what type of profanity they use and whether there are any transgender people in the country.

The 32-year-old Jang is among a handful of young North Korean refugees in South Korea who have launched YouTube channels that offer a rare glimpse into the everyday lives of people in North Korea, one of the world's most secretive and repressive countries.

While mainstream outside media reports on North Korea focus on heavy subjects like the North's nuclear program or its internal power hierarchy, these young YouTubers feed a growing demand for softer news related to daily life in their former home country.

Their rise comes amid increased public attention to North Korea, whose young leader, Kim Jong Un, has made global headlines with a provocative run of weapons tests and high-stakes nuclear diplomacy with President Donald Trump.

"There are people who yearn for real scenes showing how people in North Korea live. There is a niche market for that," said Jeon Young-sun, a research professor at Seoul's Konkuk University. "Simply speaking, some people are curious about what beer North Koreans drink and what cookies they eat."

Jang uses his Samsung smartphone to film himself at his small Seoul apartment, and sometimes invites fellow North Korean refugees as guests and has friends film him when he's venturing outside his home. He often appears with his trademark dark fedora, but sometimes with a colorful wig, a false mustache or even a Kim Jong Un mask.

Video clips uploaded on Jang's 2-year-old channel showed him saying that ordinary North Koreans usually raise dogs, rabbits, pigs and chickens, but to either eat or sell to markets. He said that calling someone "a baby born by a young female slave" is considered a profanity in North Korea and that people there say "Do you want to have the order of your ribs revolutionarily reorganized?" when trying to intimidate others.

He also said he never heard about the existence of transgender people in North Korea, though he heard about gay people in the country.

Jang, who has about 7,000 subscribers to his channel, said he does manual labor and delivers fried chicken as a means of living because his YouTube-related income is too small. But he feels it's worth it to keep his YouTube career going because some subscribers have left messages saying his broadcasts helped resolve their misunderstandings of North Korea.

"They cheer me up and make me be positive. They are the reasons why I shoot YouTube videos today and tomorrow," Jang said, petting his Maltese.

He said the term "Tango" in his channel's title is an abbreviation of Korean words meaning "a plump cat," a reference to his friends joking that the round-faced Jang has a cat-looking face. Although he knew that tango is a type of dance, he decided to use the word because the liveliness of the Latin American dance matches what he seeks from his channel. 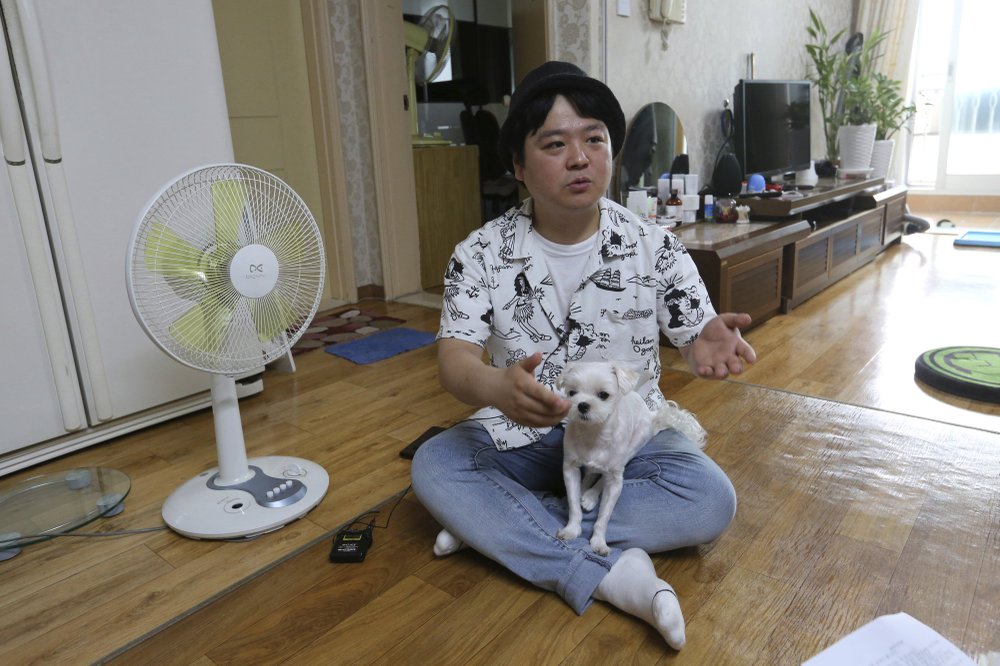 Jang Myung-jin holds his dog while talking about his YouTube channel at home in Seoul in this July photo. speaks during an interview at his house in Seoul, South Korea. Jang enjoys putting on funny wigs and hamming it up on his channel. (Photo by Ahn Young-Joon via AP)

PUTTING A FACE ON THE NORTH

Other North Korea-born YouTubers talk about why they left their homeland and the experiences they've had in South Korea. Some also broadcast themselves putting on North Korean-style makeup or eating foods from the country.

The young YouTubers are mostly stylish, contrary to the stereotype of North Korean refugees as being rough and unsophisticated. About 32,000 North Koreans have fled to the South over the past two decades to avoid poverty and political repression.

Kang Na-ra, a North Korean escapee who regularly appears on two YouTube channels and two TV programs, is called "Princess Na-ra" by her fans. The 22-year-old with long, brown-dyed hair said she has a 200-member fan club that has sent her a cake topped with a mini-Kang doll on her birthday for the past three years.

When Kang, dressed in a North Korean military uniform, showed how to put on North Korean-style makeup on her YouTube channel, her subscribers wrote, "You are so pretty even without makeup" and "You're such a beauty."

"I like communicating with people by posting responses to the messages that they put on my channel," said Kang, wearing two rings on each of her hands. "I want to let the people know about North Korean culture and show more about how I am living in South Korea."

The YouTubers, however, also have anti-fans who often vent their anger at them when North Korea does something provocative like conduct a weapons test.

Kang said she feels a "little sad" when she reads malicious messages from people such as "Go back to your country" and "Why does a Red live here?"

Jang said some messages have been left for him wishing for him to be assassinated with a poisoned needle or banished to a North Korean coal mine.

While there have been some TV programs in the South featuring North Korean refugees, some experts say they don't fully carry the escapees' voices because they were directed, filmed and edited by South Koreans.

"On YouTube, defectors can speak whatever they want without being filtered and edited. ... Given that, I would say their programs provide content that the TV shows can't provide," said Lee Kwang Baek, the South Korean head of a YouTube channel on North Korea.

Their YouTube programs are also believed to help address the widespread misinformation about North Korea in the South. Jang said a middle school student once asked him if North Koreans eat dirt when they're hungry, while another escapee-turned-YouTuber, Lee Pyung, said he was asked whether North Koreans give potatoes instead of money to a driver when they take a bus. 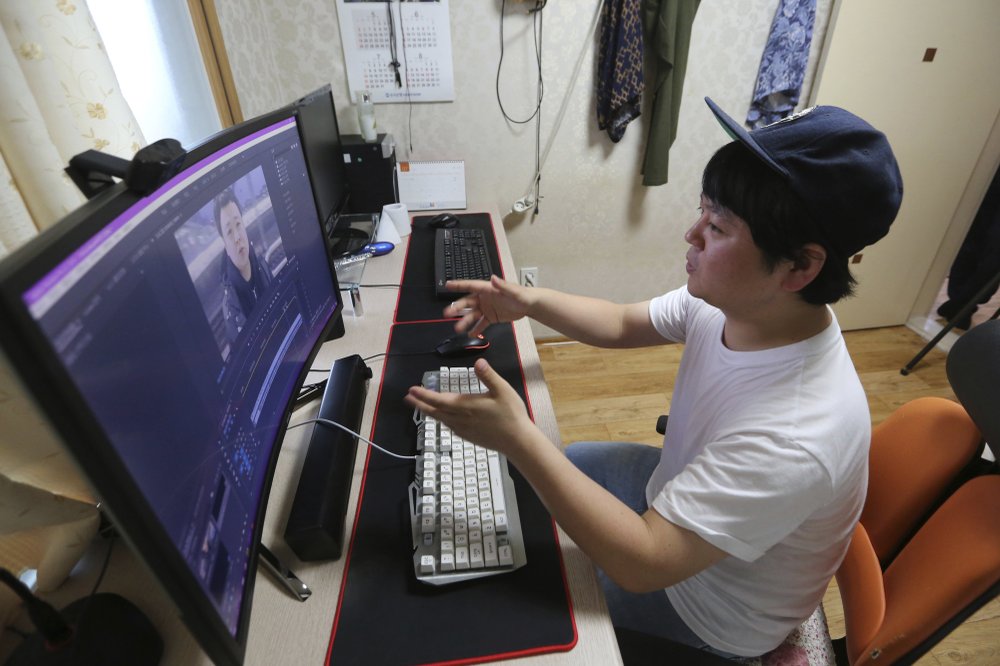 North Korean refugee Jang Myung-jin edits his YouTube footage during an interview at his house in Seoul, South Korea in July. Back home in North Korea, Jang's YouTube channel would never be possible. (Photo by Ahn Young-Joon via AP)

The YouTubers' most popular content is stories of their dangerous escapes to South Korea.

Kang's escape story, posted on someone else's YouTube channel last year, has received about 1.7 million views. She said she thought she was going to die when she was carried away by water while crossing the Tumen River to go to China before coming to South Korea in December 2014.

Kang said she ran away from her home in North Korea after fighting with her stepmother. Then her biological mother, who had already resettled in South Korea, hired brokers who helped her come to the South about two weeks later.

Besides her longing for her mother, Kang said her wishes to wear jeans, dye her hair and date handsome South Korean men also pushed her to make a perilous journey to the South.

Jang hasn't posted his escape story yet because he said he wants to fill his channel with more amusing content.

He said his family left North Korea in 1998 to escape a famine that killed hundreds of thousands of people, including his first love and school desk mate in the northeastern city of Onsong.

Jang said he had a big crush on the 11-year-old girl with fair skin and big eyes, who lived with her grandmother. He recalled how the two would hold hands when he walked her to her house.

After the girl didn't come to school for two to three weeks, their teacher asked Jang to go and check on her. When he arrived at her home, he found the girl, then all skin and bones, lying dead with her eyes and mouth open, while her grandmother had disappeared.

Terrified, Jang immediately bolted out of the house and reported the girl's death to neighbors before crying all day.

A few months later, he fled North Korea with his parents and younger brother.

Before his family walked across the frozen Tumen River, his father told him to turn back and look at the country they wouldn't likely return to.

"While looking at my hometown for about five minutes, I thought about that girl," Jang said.

"I thought that her only fault was being born in the wrong country," he continued. "If she had come to South Korea, she wouldn't have starved to death ... and could have become a YouTuber like me."

Print Headline: This is us