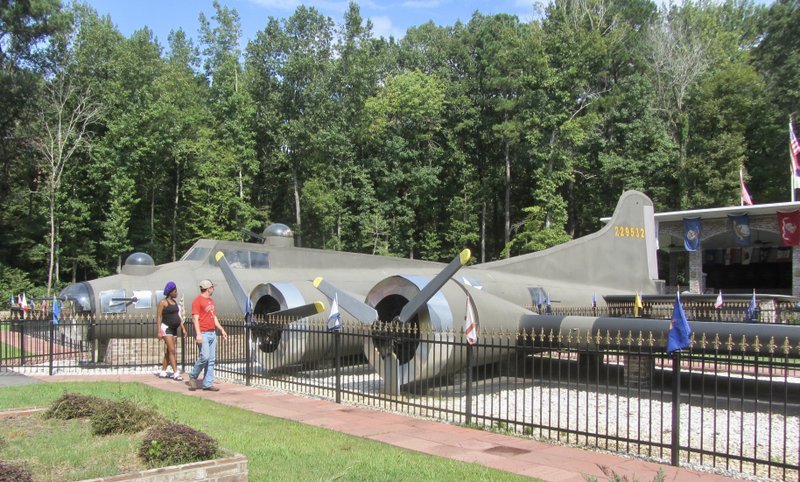 A full-scale model of a World War II bomber is the centerpiece of B-17 Memorial Park north of Sheridan. (Photo by Marcia Schnedler, special to the Democrat-Gazette)

SHERIDAN — The nine B-17 crewmen flying over Grant County on March 12, 1943, were on their way to Florida and eventually to England to take part in the Allied bombing campaign against Nazi Germany.

This Flying Fortress leg from Kansas would be a milk run, or so they imagined. Once across the Atlantic Ocean, they'd join the brutal aerial combat over Europe, which killed some 26,000 U.S. airmen before Germany's surrender on May 8, 1945.

But their lives ended that March 12, in a crash now marked with due reverence at B-17 Memorial Park, six miles north of Sheridan. Dedicated in 2015, it is one of Arkansas' most evocative military tributes. It is also rather remote, reached via three meandering county highways off U.S. 167.

Adding to the resonance of the memorial, built and maintained by the local American Legion and other volunteers, are panels honoring Grant County servicemen killed in action from World War I to Vietnam. Separate markers also pay tribute to Civil War soldiers — Confederate and Union — who fell during the 1864 Battle of Jenkins Ridge, fought nearby.

The park's most eye-catching feature is a full-size model of a four-engine aircraft like the Boeing No. 42-29532 that crashed. The veterans got help from prisoners at Grant County's jail to build the replica from wood and metal, including thousands of rivets. Mannequins are visible of the two pilots, the bombardier and other crewmen, including the tail gunner in his lonely perch.

After the crash, it was reported that the plane could be heard sputtering and flying low before it nosedived into a grove of trees about 3:30 p.m. The nine dead airmen hailed from as many different states: Vermont, Missouri, California, New Jersey, Iowa, New York, Arizona, Michigan and New Mexico. Their names and the flags of their states can be seen on a black granite wall behind the aircraft. 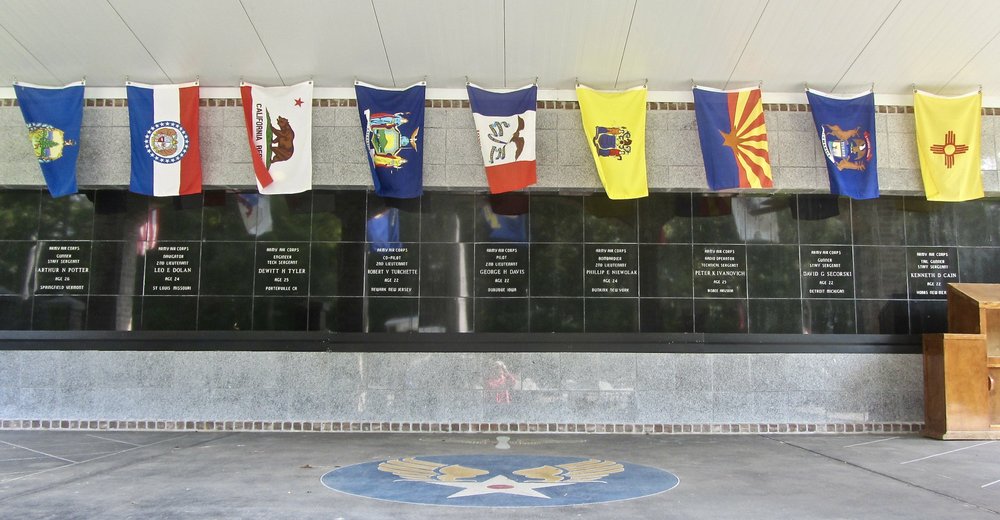 The nine Flying Fortress crew members are honored by name with their state flags at B-17 Memorial Park near Sheridan. (Photo by Marcia Schnedler, special to the Democrat-Gazette)

In an especially poignant touch, radio operator Peter Ivanovich tied one of his dog tags, his rosary and a miniature deck of playing cards into a red handkerchief. He evidently threw the package from the aircraft just before the crash, to be recovered later by a nearby resident and later mailed to the dead airman's mother in Arizona.

The Army Air Force investigation of the crash placed most of the blame on severe thunderstorms and pilot error. But research by American Legion members uncovered information that the B-17 was in poor repair and probably should not have been airborne that day.

A few B-17s, now three quarters of a century old, continue to fly, operated by aviation enthusiasts as visitor attractions. One of them crashed Wednesday at Bradley International Airport near Hartford, Conn. Seven deaths were initially reported. The vintage bomber was one of five World War II aircraft at the airport for tours and flights.

At the site of the long-ago Grant County crash, a stone monument was set up in 1944, engraved with the nine victims' names. At the bottom are lines from an elegiac British World War I poem: "At the going down of the sun and in the morning, we shall remember them."

In following years, debris from the plane was found with the help of a metal detector. Those artifacts were given to the Grant County Museum. But the tragedy had been nearly forgotten by 1984 when young Jerry Glen Jackson and his father found the old monument.

The teenager from Benton made it his Eagle Scout project, working with the Grant County Museum, to research and retell the story. He won the honor in June 1986 but was killed in a road accident the following month.

Jackson is now portrayed in uniform, wearing his Eagle Scout sash with badges, on the reverse side of the 1944 monument beneath the stone arch at the park's entrance. The inscription describes his stated goal: "To help those families know that their loved ones have not been forgotten."

Visitors who wend their way to the park will find that his goal has been memorably achieved.