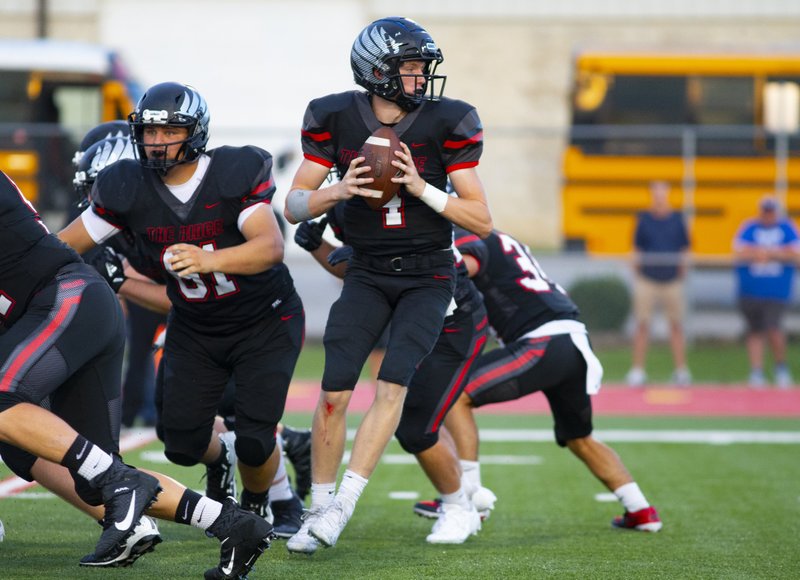 David Beach -- Special to the NWA Democrat-Gazette -- Tate Busey about to hand ball off against Harrison at Blackhawks Stadium on Friday, August 30, 2019.

Pea Ridge fans have learned by now not to give up on their team because the Blackhawks have certainly not given up on themselves.

Pea Ridge followed an 0-3 start with consecutive wins over Gentry and Lincoln in 4A-1 Conference play. The path could be similar to last season when Pea Ridge started 0-2 before winning seven consecutive games.

A 55-21 road win at Lincoln sets up nicely for the Blackhawks, who return home to face Gravette and Prairie Grove for consecutive conference games.

Senior quarterback Tate Busey accounted for five touchdowns in the win over Lincoln. He threw touchdown passes of 45, 57, and 8 yards and ran for scores of 43 and 7 yards. He also had a 48-yard punt that was downed at the Lincoln 4.

For his effort, Busey is the Northwest Arkansas Democrat-Gazette Player of the Week.

Pea Ridge went 0-3 in non-conference games against three Class 5A schools (Harrison, Maumelle, and Farmington) that are a combined 15-0 halfway through the season. Playing up in classification is by design for the Blackhawks, who will join the 5A-West Conference next season.

"We had a lot of doubters, but we believed in ourselves" Busey said of the Blackhawks' 0-3 start. "We pushed each other and kept each other up."

Pea Ridge took control early against Lincoln. Busey threw touchdown passes of 45 yards to Hunter Rains and 57 yards to Zak Withrow before Samuel Beard scored on a 10-yard run to give the Blackhawks a 28-7 lead after one quarter. Beard then found Trevor Blair with an 8-yard pass to build the lead to 41-7 in the second quarter.

Busey finished 6 of 9 passing for 170 yards and he also ran for 76 yards on just eight carries.

"Tate is a really athletic," Pea Ridge coach Stephen Neal said. "He's a pitcher on our baseball team and a dual threat at quarterback with a knack for running the football."

Busey was a starter last year when Pea Ridge finished 7-4 and made the playoffs after opening the season with consecutive losses to Harrison and Maumelle. He is confident of another run if the Blackhawks keep improving and remain focused.

"If we stay focused, we can go just as far as we did last year or maybe even farther," Busey said. 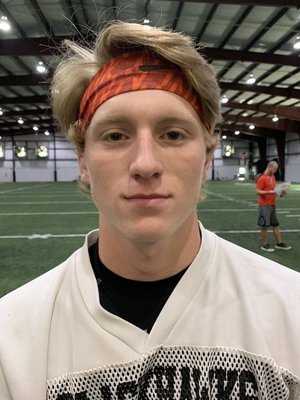 JETT DENNIS Greenland running back rushed for 140 yards and a touchdown in the Pirates’ 18-14 win against Mansfield.

BRANDON ATWOOD Gentry quarterback was 18 of 26 passing for 311 yards and 3 touchdowns, and rushed for 84 yards and 2 touchdowns in the Pioneers’ 40-14 win against Berryville.

KEIANDRE HOBBS Prairie Grove running back ran for 115 yards and 2 touchdowns as the Tigers trounced Gravette 48-7.

ELI REECE Shiloh Christian quarterback fired 3 touchdown passes in a little more than one quarter of play as the Saints rolled to a 58-0 win against Green Forest.

KAIN JOHNSON Elkins quarterback ran for 2 touchdowns and passed for 3 more as the Elks pounded Dover 55-0.

BRAYDEN ROSS Charleston quarterback was 12 of 20 passing for 160 yards and 1 touchdown and ran for 2 more scores as the Tigers knocked off Cedarville 27-18.

MALACHI WEST Mountainburg back rushed for 4 touchdowns and 130 yards as the Dragons smoked Lavaca 40-19.

DALTON MCDONALD Bentonville West quarterback was 7 of 9 passing for 213 yards and 3 touchdowns in the Wolverines’ 54-20 win against Springdale High.

BLAISE WITTSCHEN Springdale Har-Ber quarterback was 15 of 19 passing for 280 yards and 6 touchdowns as the Wildcats blasted Rogers Heritage 49-13.

HANK GIBBS Fayetteville quarterback was 17 of 21 passing for 228 yards and 4 touchdowns as the Bulldogs crushed Rogers High 47-7.

JACE PRESLEY Greenwood quarterback was 34 of 48 passing for 369 yards and 4 touchdowns as the Bulldogs cruised to a 52-24 win against El Dorado.

COLTON SHAVER Harrison receiver had 6 catches for 145 yards and 2 touchdowns as the Goblins smacked Clarksville 49-3.

Print Headline: PLAYER OF THE WEEK