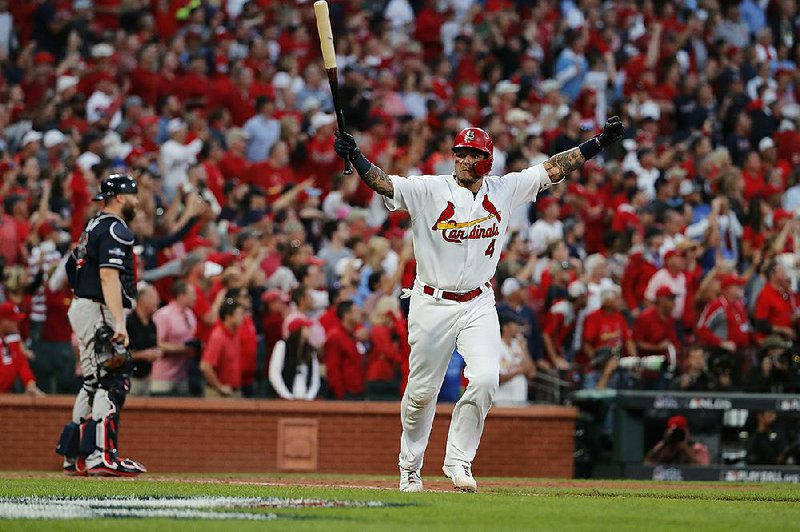 St. Louis’ Yadier Molina (shown) celebrates after hitting a sacrifice fly in the 10th inning to bring in Kolten Wong for the winning run to give the Cardinals a 5-4 victory over the Atlanta Braves in their National League division series Monday in St. Louis. The series is tied at 2-2, with the deciding game set for Wednesday in Atlanta.

ST. LOUIS — They all knew. Every single one of them. Paul Goldschmidt and all the St. Louis Cardinals. Ozzie Albies and the rest of the Atlanta Braves.

Tough to beat Yadier Molina in a big postseason spot.

Molina pushed the Cardinals to a deciding Game 5 of the National League division series, poking a tying single in the eighth inning and then lifting a sacrifice fly in the 10th to beat the Braves 5-4 Monday.

Molina slung his bat far into the outfield after his winning swing, and the crowd at Busch Stadium roared with the longtime heart of the franchise.

“An elite, special player, that’s what he is,” Cardinals Manager Mike Shildt said.

Game 5 will be Wednesday back in Atlanta. The Cardinals will have ace Jack Flaherty on the mound, and the Braves will go with Mike Foltynewicz.

“In front of our home fans on Wednesday a Game 5,” Braves first baseman Freddie Freeman said. “That’s what it’s all about so we’ll be ready to go.”

Kolten Wong led off the St. Louis 10th with a ground-rule double against Julio Teheran. After Goldschmidt was intentionally walked, Wong advanced on Marcell Ozuna’s forceout and easily scampered home on Molina’s fly to the front of the warning track in left field.

Wong threw his hands in the air as he ran toward the plate. Molina rounded first base with his bat in hand, then flung it away as the celebration erupted. He discarded his batting helmet as the rest of the Cardinals poured onto the field.

“I lost it right there,” the 37-year-old catcher said. “I think I tossed the bat in the bullpen.”

M o l i n a a l s o m a d e a throat-slashing gesture as he left the field. Braves star Ronald Acuña Jr. made a similar motion across the top of his chest after hauling in Molina’s flyball for the final out of Atlanta’s 3-1 victory Sunday.

Before coming up with his first career game-ending RBI in the postseason, Molina tied it at 4-4 with a two-out single in the eighth that went just off the top of the glove of a leaping Freeman.

On this day, there was no denying the nine-time All-Star in red.

Albies homered and drove in three runs for Atlanta, and Acuña Jr. had four hits. But the NL East champions went 0 for 9 with runners in scoring position, a continuing problem in the postseason over the past two years.

The Braves left the bases loaded in the sixth and seventh. Acuña was stranded on third when Josh Donaldson flied out in the ninth.

“We’re a hit away from — just some productive outs — from continuing to add on,” Braves Manager Brian Snitker said.

Ozuna homered twice for St. Louis, and Goldschmidt also connected. But the NL Central champions were four outs from a second consecutive difficult loss before Molina delivered down the stretch.

“It’s not an accident, the success that he has,” Goldschmidt said. “He works really hard at it.”

Albies gave Atlanta a 4-3 lead with a two-run home run off Dakota Hudson in the fifth, capping a three-run rally.

The Braves carried the advantage all the way into the eighth, but Goldschmidt doubled and Molina came up with the tying hit off Shane Greene.

“I mean, he’s a ballplayer,” Snitker said, handing Molina perhaps the greatest compliment that a baseball lifer will use. “He plays the game, he plays the game in front of him probably about as good as anybody in the game.”

Carlos Martínez gave St. Louis a lift after Acuña led off the ninth with a double, retiring three in a row. The closer took the loss Sunday when he gave up three runs in the ninth.

Game 1 starter Miles Mi-kolas worked the 10th for the victory.

Dansby Swanson had two hits and scored twice for Atlanta, which has dropped its past nine postseason rounds — just one off the major league record held by the Chicago Cubs. It is trying to advance to the franchise’s first NL Championship Series since 2001.

“We battled and we gave ourselves a chance,” Swanson said. “We just weren’t able to get it done today.”

St. Louis got off to a fast start, delighting the crowd of 42,203 on a picturesque October afternoon. Goldschmidt drove a 3-1 changeup from Dallas Keuchel (Arkansas Razorbacks) deep to left with two out in the first, and Ozuna followed with a laser into the second deck in left for a 2-0 lead.

It was the first set of consecutive playoff home runs for the Cardinals since Wong and Randal Grichuk accomplished the feat in Game 2 of the 2015 NLDS against the Chicago Cubs.

The Braves got one back on Albies’ sacrifice fly in the third, but Ozuna led off the fourth with another drive to left for the first multihomer playoff game for a Cardinals player since Carlos Beltran in Game 2 of the 2012 NLDS against Washington.

17) with four RBI in his first career postseason series.

Pitching on three days of rest, Keuchel allowed 3 runs and 4 hits in 3 1/3 innings in his 11th career postseason start. 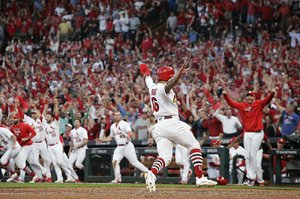 Photo by AP/CHARLIE RIEDEL
St. Louis’ Yadier Molina celebrates after hitting a sacrifice fly in the 10th inning to bring in Kolten Wong (shown) for the winning run to give the Cardinals a 5-4 victory over the Atlanta Braves in their National League division series Monday in St. Louis. The series is tied at 2-2, with the deciding game set for Wednesday in Atlanta. 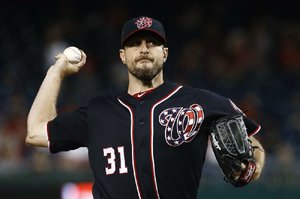