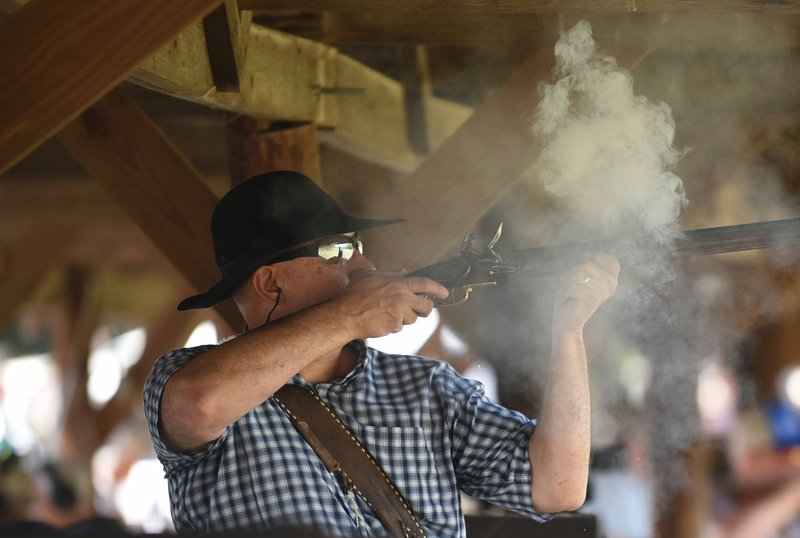 NWA Democrat-Gazette/FLIP PUTTHOFF Mark Noah of Springfield, Mo., fires at a target during the Saunders Memorial Shoot in Berryville.

The sweet aroma of burnt gunpowder tickled the noses of shooters at the 64th annual Saunders Memorial Muzzle-loader Shoot in Berryville.

Clouds of smoke drifted over the gun range during the shoot Sept. 26-29 at Luther Owens Park on the outskirts of town. Muzzleloader enthusiasts from several states fired black-powder rifles, pistols and shotguns at targets for awards. Gunpowder and ammunition are loaded by hand through the end of the barrel for a single shot.

Shotgunners hit flying clay targets while rifle and pistol shooters aimed at paper targets at the park's gun range. A little ways out of earshot, vendors sold knives, artwork and old-time goods. Nonshooters watched the matches and talked black powder with the contestants.

Charlie Caywood sat on a wooden bench in the shade of a pavilion, taking in the scents and sounds of the shoot. Some of the black-powder rifles and knives he makes graced a table in front of him.

The 88-year-old gun builder from east Benton County has been making muzzleloaders for 65 years. He's legendary for the beautiful and quality black-powder guns he makes, which are functional works of art.

Caywood is still at it, "but I'm a lot slower now. By the time I get 'em done they're rusty," he joked.

Knives, hatchets and other pieces take shape in the craftsman's skilled hands.

"I make everything," Caywood said. "Everything but money."

There have been 64 Saunders Memorial Shoots. Caywood has missed only one. The shoot used to be held on a hilltop not far from the range.

"When you got up there, you can see everything," Caywood recalled, "and there's not a level spot on it."

The late Col. Burton "Buck" Saunders donated the land for Luther Owens Park, Caywood said, and the shoot moved to the range built on the property.

"Col. Saunders was a crack shot and tracker who the police used to come and get to track bandits," Caywood said. Saunders also donated the building that houses the Saunders Museum in Berryville. Guns and other items Saunders donated are displayed in the museum.

The park is named for Luther Owens who was a close friend of Saunders. Owens formed a muzzleloader shooting club and developed the shooting range. The range at Luther Owens Park is open to the public. There's a small range fee and users put their money in a metal box tacked up on a post. Camping is allowed for a fee. There are picnic tables and a playground.

Grace Hensley from Shawnee, Okla., loaded her muzzleloader rifle during a match. She teaches seventh-grade English in Shawnee, "but I'm not skipping school," she confirmed on Friday of the shoot. "This is a personal day."

She can't take her guns to school, but Hensley shares the black-powder tradition with her students as a history lesson. Hensley's husband got her interested in the one-shot guns.

When Hensley turned 50, her husband gave her -- what else -- a fine muzzleloading rifle, the gun she shot at the 64th Saunders Memorial Shoot.

"People asked me what he got me for my birthday, and I'd tell 'em 'a gun,' " Hensley laughed.