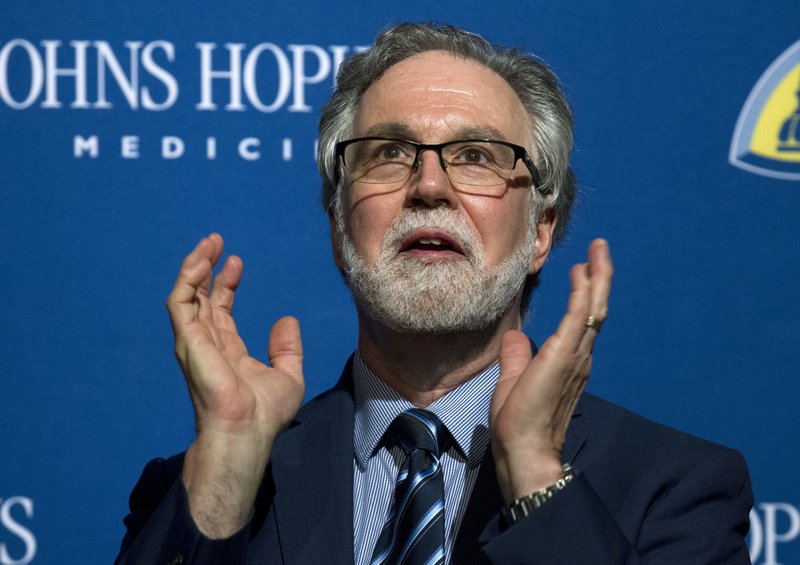 Professor Gregg Semenza speaks during a news conference after he was awarded the 2019 Nobel Prize for Physiology or Medicine at Johns Hopkins Medicine Hospital in Baltimore, Monday, Oct. 7, 2019. Semenza shares the prize with Drs. William G. Kaelin Jr. and Peter J. Ratcliffe for their discoveries of how cells sense and adapt to oxygen availability, the Nobel Committee announced Monday. (AP Photo/Jose Luis Magana)

LONDON -- Two Americans and a British scientist won a Nobel Prize on Monday for discovering details of how the body's cells sense and react to low oxygen levels, providing a foothold for developing new treatments for anemia, cancer and other diseases.

Drs. William Kaelin Jr. of Harvard University, Gregg Semenza of Johns Hopkins University and Peter Ratcliffe at the Francis Crick Institute in Britain and Oxford University won the prize for advances in physiology or medicine.

The scientists, who worked largely independently, will share the $918,000 cash award, said the Karolinska Institute in Stockholm.

They "revealed the mechanism for one of life's most essential adaptive processes," the Nobel committee said.

Cells can encounter lowered oxygen not only from situations like living at high altitudes, but also from things like a wound that interferes with local blood supply. Cellular response triggers reactions that include producing red blood cells, generating new blood vessels and fine-tuning the immune system.

The Nobel committee said scientists are focused on developing drugs that can treat diseases by either activating or suppressing the oxygen-sensing machinery. Such manipulation could help in attacking cancer cells, experts said.

[Video not showing up above? Click here to watch » https://www.youtube.com/watch?v=GZ46mtdss_s]

Another benefit of this research is medication to boost production of red blood cells in anemia, which can appear in people with chronic kidney disease. One such drug has been approved in China and Japan and a filing for approval in the U.S. is expected soon, Kaelin said.

Other potential uses include treatment of heart attacks, strokes and a condition of reduced blood flow in the limbs that can lead to amputation, the researchers said.

Kaelin, 61, said he was half-asleep when the phone rang Monday morning with the news of his award.

"I don't usually get phone calls at five in the morning, so, naturally, my heart started racing and I could see the call was from Stockholm," he said. "And so I think at that point I almost had an out-of-body type of experience."

Ratcliffe, 65, said he learned the news after he was summoned out of a meeting by his secretary, who had "a look of urgency."

Trained as a kidney specialist, Ratcliffe said his research began when he and colleagues simply wanted to figure out how cells sense oxygen.

"I thought it was a definable problem and just thought we'd find out how it worked," he said. It was about two years into their research program, which began in 1990, that they realized the discovery had much wider significance, Ratcliffe said.

"We saw that it wasn't just cells in the kidney that know how to sense oxygen, but all cells in the body. ... There are hundreds and thousands of processes the body uses to adapt to and regulate its oxygen levels."

He said while some promising drugs have been developed, it will be years before it's clear whether such discoveries are going to change the lives of tens of thousands.

In Baltimore, Semenza, 63, said he slept through the Nobel committee's initial phone call. "By the time I got to the phone it was too late," he said. He went back to sleep but was able to answer the second call from Stockholm.

He said kidney cancer may be the first malignancy in which a drug based on the prize-winning work might make chemotherapy more effective, and that he hopes many other cancers will follow.

Speaking at a news conference at Johns Hopkins University's School of Medicine, Semenza paid tribute to his biology teacher, Rose Nelson, at Sleepy Hollow High School in Sleepy Hollow, N.Y., for inspiring his pursuit of medicine.

"She used to say, 'Now when you win your Nobel Prize, I don't want you to forget that you learned that here,'" he said. "It's my great sadness that she is not still alive to share the moment because I know it would have meant a lot to her. She was my inspiration."

"That's the importance of teachers," he added. "To make that kind of spark."

Steven McKnight of the University of Texas Southwestern Medical Center in Dallas noted that the process discovered by the three researchers is widespread in the animal kingdom, found even in worms. He said the honored work is "of a heroic nature."

Monday's announcement kicked off this year's Nobel Prizes. The physics prize will be handed out today followed by the chemistry prize on Wednesday. This year there is a double-header for the Nobel Literature Prize -- one each for 2018 and 2019 -- which will be awarded Thursday. The Peace Prize will be announced on Friday.

The 2018 Nobel Literature prize was suspended after a sex abuse scandal in the Swedish Academy, the body that awards the literature prizes, so two prizes are being awarded this year.

The economics prize will be awarded next Monday.

The laureates will receive their awards at ceremonies in Stockholm and Oslo on Dec. 10 -- the anniversary of Alfred Nobel's death in 1896.