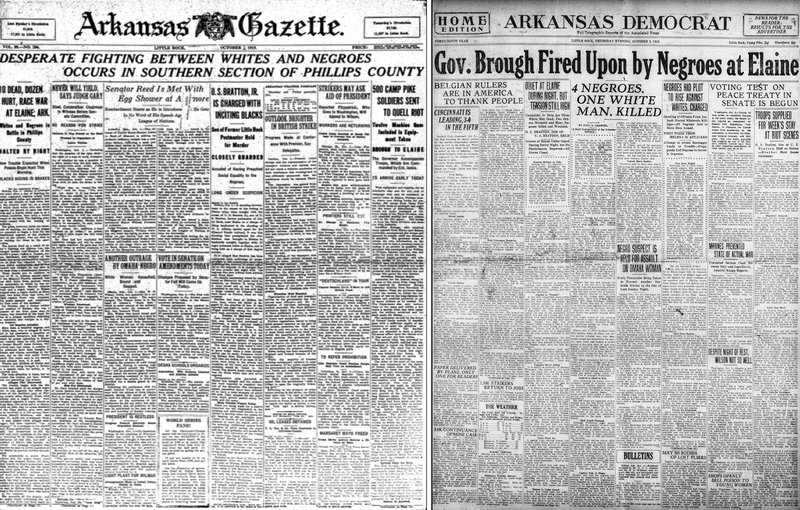 This week's Old News is awful.

Since May 2016, this column has been reading its way, day by day, through stories that appeared in the Arkansas Gazette and the Arkansas Democrat 100 years ago. In the first week of October 1919, they tell a story both got wrong, the one we know as the Elaine Massacre.

Today it's about white supremacists' misinterpretation and brutal overreaction to union organizing among tenant farmers in Phillips County. Today, evidence suggests those farmers were fed up with being expected to accept less than fair value for their crops.

In banner headlines and long, horrified narratives, both newspapers documented violence from the mistaken perspective that the farmers who gathered at a church were forming "secret societies" and intended to murder white landowners. For some reason, three men had parked in front of that church and a shootout with its armed guards had ensued, leaving a white man dead and a white deputy sheriff wounded. Then, immediately acting on word of mouth, armed posses moved on the tenant farms and tiny communities, hunting down "the insurrection."

But you've heard this story. If not, Sean Clancy's recap in the Sept. 29 Arkansas Democrat-Gazette is helpful.

But even when they see things from a biased viewpoint, or from a perspective limited by their informants’ biased viewpoints, good reporters can't help but record eloquent details: bodies tossed to the side of the road and left as a warning, possemen proud they hadn't hurt anybody who didn't fight back, single shots in the distance.

Imagine you are a resident of Arkansas in 1919 and you live too far away from the blood-stained canebrakes of Phillips County to see the truth with your eyes. Reading such headlines, what sort of world would you think you lived in? Not a safe one. But would you immediately rush next door and slaughter the neighbors?

Written information — even misinformation — is not so urgently terrifying as word of mouth. The written word mediates — stands between — events and our reactions. In the pause required by that mediation there is time for skepticism.

We need more distance from events. We need time to notice how much we don't yet know, to consider the source, to look for more evidence, to think through what could happen if we've got the story wrong.

Old news can be awful, but if it teaches us how to think about new news, that's good.