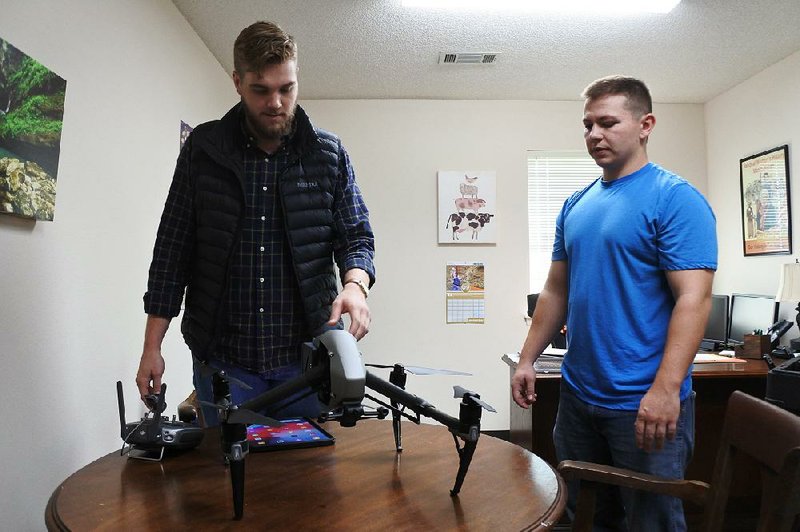 FORT SMITH — The Sebastian County Conservation District has a new asset that sets it apart from its counterparts throughout the state: a drone.

The district acquired the drone earlier this year. Debbie Moreland, program administrator for the Arkansas Association of Conservation Districts, said the district is the only one she is aware of in Arkansas with a drone, trained and licensed people to use it, and is able to implement some of the association’s conservation practices.

Conaly Bedell, finance chairman for the Sebastian County Conservation District Board of Directors, said the district, which serves Sebastian, Crawford and Scott counties, will be able to provide a level of information that will help people make better decisions about conservation with the drone.

The district’s first project that utilized it took place Sept. 19 in Scott County, where the district completed a certification for a spray project to kill scrub brush and unwanted vegetation in a forest area, Bedell said.

“In the past, the soil conservation technician would’ve had to walk the 70 acres, would’ve taken three or four hours,” Bedell said. “We completed the entire process in 20 minutes.”

Karen Brazzeal, marketing director for the district, said it acquired the DJI Inspire 2 Series drone Aug. 6. In addition to taking pictures, the drone can shoot 5.2K video at 30 frames per second and 4K video at 60 frames per second. It also comes with autonomous flight mapping software to allow technicians to “live map” and create 3D maps for entire parcels of land. Among the types of projects the drone can be used for are streambank and watershed projects, dam inspections, forestry, pasture and forage surveys, and damage assessments.

[Video not showing up above? Click here to watch » https://www.youtube.com/watch?v=Z2qyZaxBb30

The district’s new drone can also be used to market and promote its various projects, and it will be available for other conservation districts as well.

Bedell said he believes the Sebastian County district will get requests to carry out projects outside of its service area as other districts in the state learn about what it can do with its drone.

“In the state of Arkansas, which is hugely agricultural, that being the number one economic source ahead of tourism even, we have a diverse kind of agriculture,” Bedell said. “In the east part of the state, you’ve got all kinds of water management issues, you’ve got the large row crop farms, you’ve got wildlife management areas, and they have needs that would be different to what we have here where the drone would be highly applicable.”

Bedell said that the board and district staff began evaluating what a drone could do to enhance the district’s nutriment management planning in February. By May, the board discussed potential values with partner agencies in Little Rock, and then it decided to move forward. The board included the drone in the budget for the fiscal year that began July 1.

The district has spent a total of $19,649 so far on its drone project, Bedell said. Of this amount, $9,489 has been spent on “hard costs,” such as purchasing equipment, tuition for training, Federal Aviation Administration and software licensing and a supply of rechargable batteries to enable 90 minutes of flight for the drone at one time.