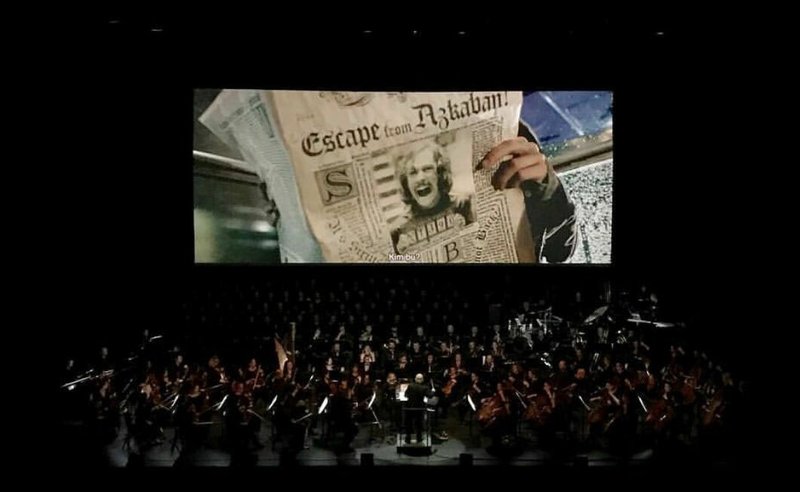 True blue Potterheads will get an opportunity to hear John Williams' Oscar-nominated score from "Harry Potter and the Prisoner of Azkaban" live when CineConcerts' full orchestra performs the music as the movie plays on a huge, high-definition screen Oct. 12 at the Walmart Arkansas Music Pavilion. Shih-Hung Young will conduct.

Concertmaster Ronnamarie Jensen -- a University of Arkansas graduate who earned her undergraduate and Master's degrees in Fayetteville -- says the atmosphere when playing for an event like this is distinctly different than when playing in a conventional classical setting.

‘Harry Potter and the Prisoner of Azkaban’ in Concert

"The fans get decked out in their regalia and cheer for their heroes and boo for the villains," she says. "It's a very interactive experience -- especially in a large, outdoor venue like this one, which adds an extra element of fun. Sometimes people feel that classical concerts are stuffy, but that is certainly not the case here."

Out of all of the movies that she's accompanied as a first-chair violinist, Jensen says the Harry Potter films hold a special place in her heart.

"The Harry Potter scores are the most difficult scores John Williams has ever written, and he has had a very grand career," she says. "This is so different in so many ways than some of his other films like 'Star Wars' and 'Raiders of the Lost Ark.' It has a more fantasy feel to it, and the way that he expresses that involves some really interesting technical challenges."

The performance will also feature musicians from the Symphony of Northwest Arkansas and the Bentonville High School Chamber Singers.

"The students were shocked and thrilled at the same time," says Terry Hicks, Bentonville Public Schools director of choirs. "As I explained exactly what they would be doing, they became even more excited. The chance to perform on stage at the AMP is not something that happens often, and to be the live soundtrack for a film is something they will be able to tell stories about the rest of their lives. The fact that they are singing for a Harry Potter movie added to thrill. They have already had movie watch parties following the musical score."

Print Headline: Fun For The Family