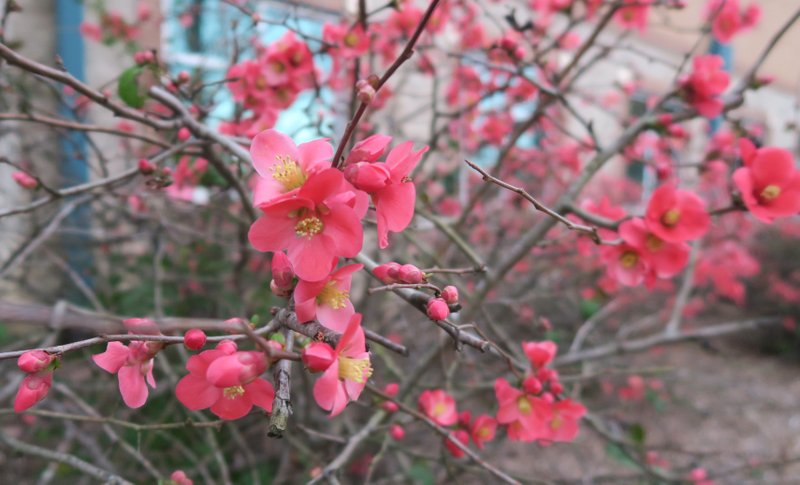 Flowering quince winds down in the fall and so should survive caterpillar attacks in September. (Special to the Democrat-Gazette/JANET B. CARSON)

Q My quince bush has been destroyed by caterpillars. It was fine one day and almost bare the next. I pulled off at least 20 of them and have not seen any more. Some of the smaller stalks are still leafy, but the larger ones have just a few leaves at the tip or none at all. Can it survive this or will we just have to wait till spring and see? Is there anything I can do to help it?

A This late in the season, I would not be overly concerned. Flowering quince is a deciduous shrub that starts its growing season early and often begins its fall decline earlier than other plants. I would suspect that its growing season was pretty well done before the caterpillar attack, and it should come back fine next spring. Flowering quince is a pretty tough plant. 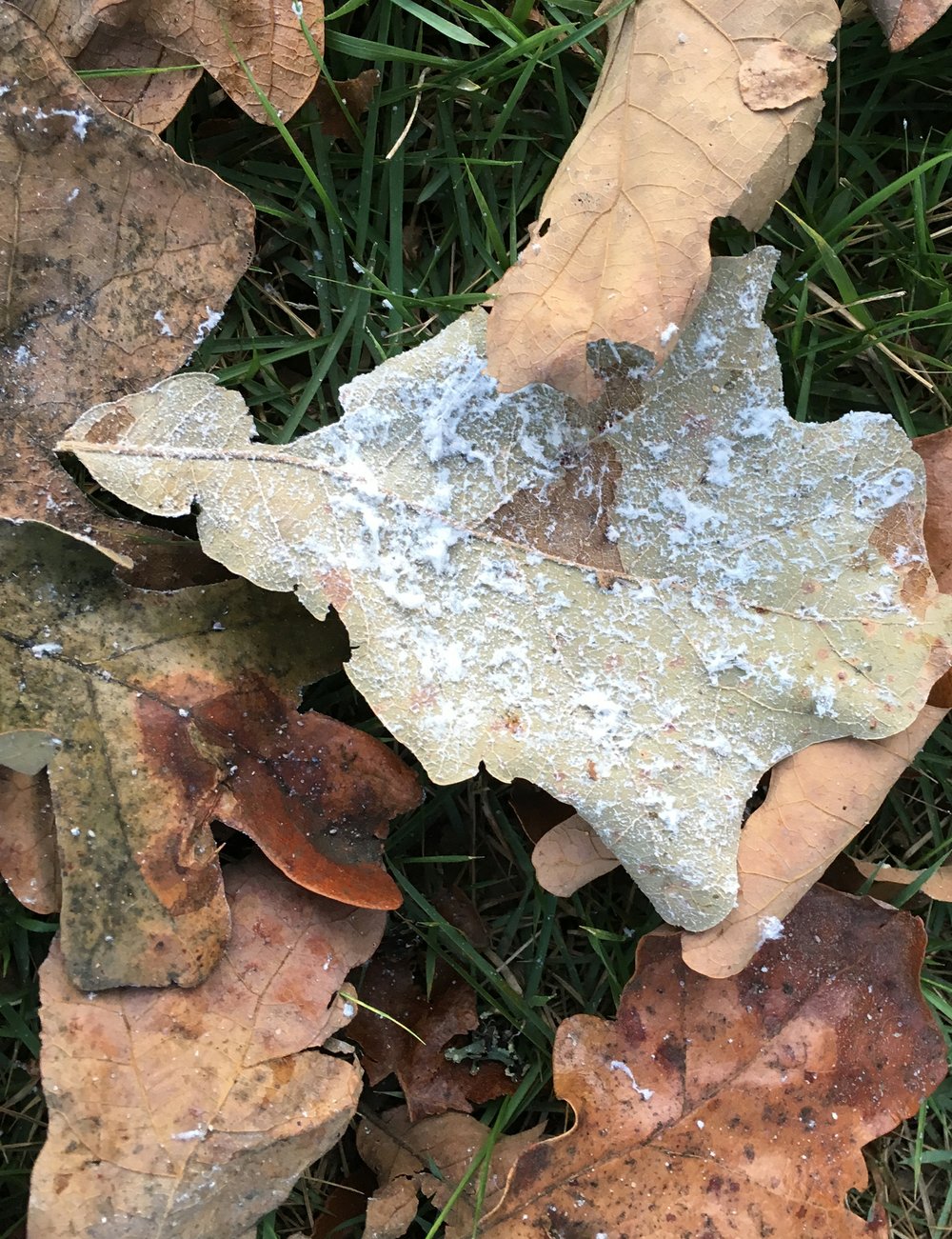 Woolly aphids cover themselves with a waxy white coat to ward off predators. (Special to the Democrat-Gazette reader photo)

Q I have attached some pictures of fallen leaves with this white powder on them. Wondering what this is and if I should be concerned.

A As hot and dry as it was late in the season, aphids have built up on many plants, especially trees. This white covering is from the woolly aphid. These small insects suck sap out of the foliage and give off a sticky substance called honeydew. The woolly aphid differs from common aphids by producing a woolly wax substance to protect the insect underneath. They are more a nuisance than harmful, especially this late in the season. 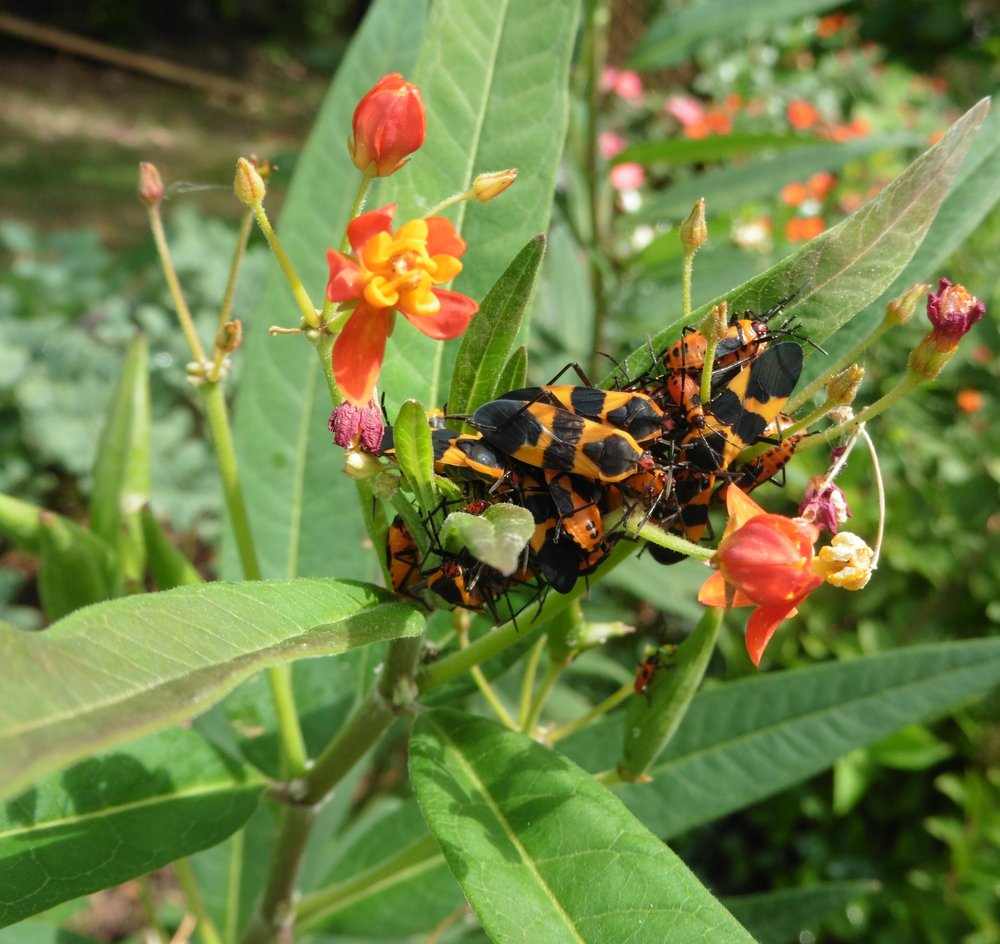 Milkweed bugs are a nuisance but shouldn't be dosed with insecticide because monarch butterflies feed on the same plants. (Special to the Democrat-Gazette/JANET B. CARSON)

Q I've been reading your column for years and have learned a lot of great gardening information. Over the years, I have tried new ways to be more environmentally friendly and add plants that attract pollinators. This year, I decided to add milkweed to my garden. This was a new experience for me. There are some very ugly beetles on the milkweed. They are orange with black spots. There are hundreds of them. Should I attempt to rid the plant of them or just leave them alone? I've noticed monarchs coming to the plant, but not staying long. Is it because of the beetles? I've attached a picture of them.

A The beetle you are seeing is a common pest of milkweed plants. It is the milkweed bug. When they begin feeding, they congregate in large numbers. The insect has a piercing, sucking mouthpart, similar to an aphid's. They feed on the leaves, stems and seed pods of the milkweed plants. They usually hit mid- to late summer, and they aren't around for long, but while they are, they are a nuisance. Some gardeners knock them off into a bucket of soapy water to kill them, because you really don't want to spray with insecticides that can damage your monarchs. Heavy infestations of milkweed bugs can deter monarchs from laying eggs. Gardeners who want more milkweed seeds often tie small net bags over the forming seedpods to keep the insects at bay. 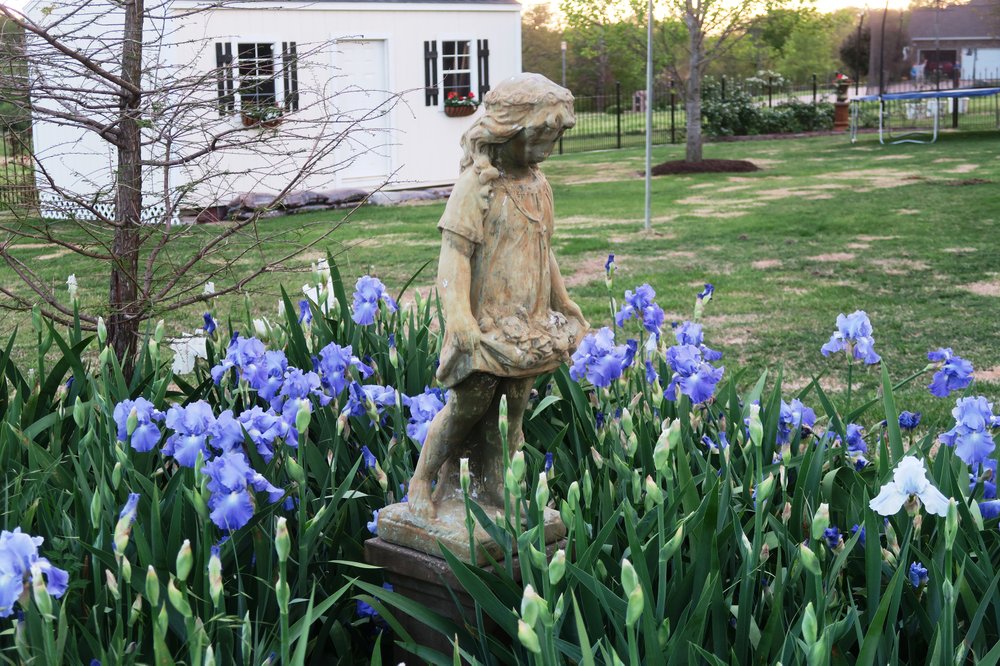 The main reasons irises stop blooming are overcrowding and lack of sunlight. (Special to the Democrat-Gazette/JANET B. CARSON)

Q I have old purple iris bulbs belonging to my mother. I live in west Little Rock. Last year they did not bloom for the first time ever. I have waited for the foliage to fall over. That hasn't happened. They have begun to produce new growth. When should they be cut back? Should I do anything now? Help.

A Usually the two reasons iris plants don't bloom is that they are not getting enough sun or they are too crowded. I am afraid you have waited a bit late in the season to divide them, but if you have a lot of iris plants, you may give it a go — but soon. Normally we divide iris rhizomes in mid- to late July or early August to give them time for their roots to peg down before winter arrives. Unless you are dividing them, there is no reason to cut the leaves. Many iris growers do cut the leaves because they have hundreds (or thousands) of iris plants and they want to aid in better air circulation and sunlight penetration and deter diseases. If you just have a few iris plants in your garden, there is no need to cut the foliage back. I only have a few in my garden, and I never cut the foliage since I think they blend into a general garden better with whole leaves versus cut leaves.