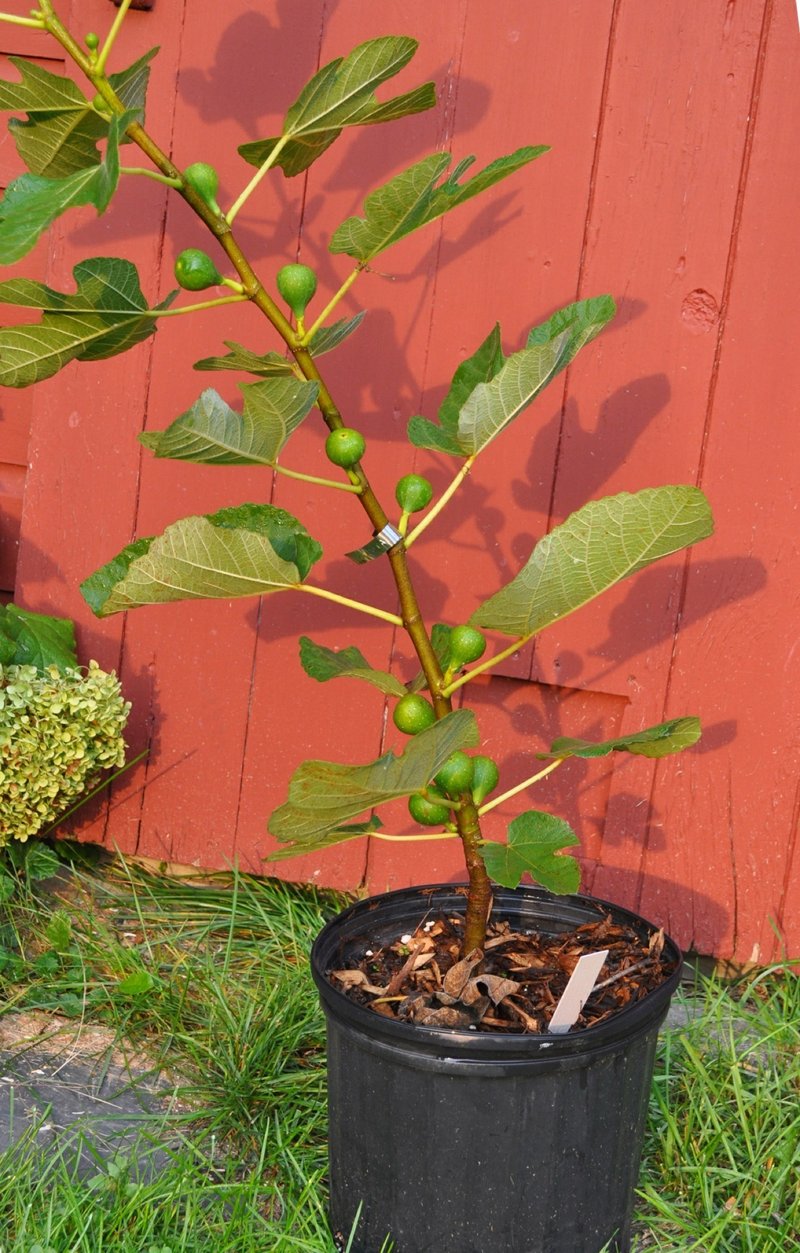 AP/LEE REICH This undated photo shows a potted fig plant in New Paltz, N.Y. Figs, although subtropical plants, are easy to grow in pots and bear quickly, so are adapted to growing in regions with cold winters.

Seems like just about everyone likes the idea of growing figs. Perhaps it's some primal attraction for this ancient fruit. The rich, sweet flavor of the tree-ripened fruits is definitely part of the reason.

Figs can, in fact, be grown over much of the United States. Although the plant is subtropical, it is very adaptable, allowing gardeners over the centuries to extend its range of cultivation.

The first trick in growing figs beyond their native Mediterranean home is getting them through cold winters.

Fortunately, fig trees tolerate all sorts of abuse. They don't mind being kept small or having their roots crowded and even hacked back yearly. That makes them easy to grow in pots. A potted fig can be protected from frigid winters merely by being moved into more hospitable quarters. For years, I grew figs in large pots. I used ordinary potting soil and each fall schlepped the plants down to the protection of my unheated basement.

Or you might plant your fig outdoors each spring, and each fall dig it up with a ball of earth adhering to its roots. Wrap the ball in a plastic bag and store the plant in a cool place.

Yet another way to grow figs where winters are cold is to bend the whole plant to the ground in fall, and then pile on some leaves or other fluffy mulch as insulation. The plants are easier to bend if the roots on the side opposite the bend are cut with a shovel.

Where winter temperatures don't drop much below zero, a wire cage stuffed full of dry leaves and capped with a bucket to shed water provides enough protection. Or even, if winters are not too cold, merely wrap the plant in some layers of burlap, with an upturned bucket atop as a waterproof cap.

As a subtropical rather than tropical plant, figs enjoy that cool, winter rest. Don't bend a plant down or move it to a basement or garage until it has lost its leaves. The bare stems will tolerate temperatures down to about 15 degrees, but anywhere between 30 and 50 degrees is about right for winter storage.

Except where fall and winter stay warm, the plants lose their leaves at the end of the season. Which is fine, and means the leafless plants do not need light during their winter rest.

NOW, GET THEM TO RIPEN

Once you've gotten your plant through the winter, your next challenge is to get it to bear as much ripe fruit as possible. Forming the fruit is no problem: Fruits generally are borne on new (and sometimes old) shoots. They form without pollination (with exceptions). And plants often start bearing the first season that they're planted.

Ripening the fruit is another matter. For this, the plant needs abundant heat and sun, which is generally sufficient over much of continental North America. Give your plant the sunniest, warmest place in your yard, perhaps against a south-facing wall.

Coastal regions have the advantage of mild winters but can remain too cool in summer to ripen many varieties. The same has been true in Northern Europe: A thousand years ago, Charlemagne didn't give up his conquest of Europe, but he did give up trying to grow figs in Holland. Where summers generally remain cool, the figs to grow successfully are those that require a shorter growing season for ripening -- varieties such as Desert King, Olympia, Latarulla and Celeste.

Where summers do get hot and long (as here in Arkansas), favorite varieties include Brown Turkey, Celeste, Peters Honey and Flanders.

Figs will not ripen at all once they are harvested. So resist the temptation to pick any fruits until they are dead ripe, at which point they may be slightly shriveled and drooping toward the ground, perhaps with a "teardrop" in their eye. Then, they are simply delectable.

Print Headline: Fig-growing rewarding, if you don't mind some work