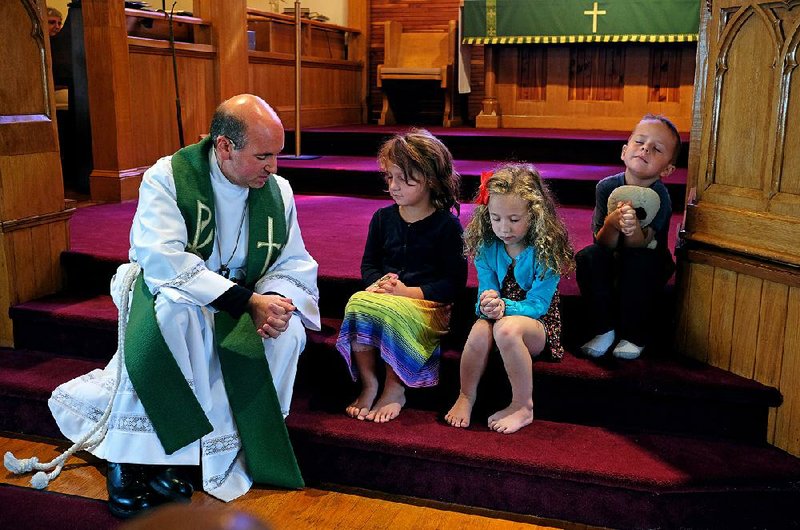 The Rev. Jason Felici prays with Olivia Caplinger; his daughter, Emma Felici; and Holden Puchany during a short time at the service where kids come to the front for a talk and prayer at Faith Lutheran Church in Franklin, W.Va.

UPPER TRACT, W.Va. -- The Rev. Jess Felici looked out from her pulpit at her tiny flock.

"Our closing hymn comes from our green books, No. 492," she said. The pianist struck up the opening notes. And the pastor walked right down the aisle and out the church door, leaving her congregants still singing without her.

She turned on her car. Drove down the gravel road until she reached the paved one. Took the hairpin turns down into the valley and back up the next mountain.

Forty-one minutes later, she walked through the doors of her next church, where the service was well underway. Still wearing her white robes, she waited while a congregant finished reading from the book of Psalms, then took over the pulpit. "I invite you to stand as you are able for a reading of the Gospel," she picked up seamlessly.

Two churches down and one more to go on this recent Sunday for Felici.

Jess, 36, and her husband, the Rev. Jason Felici, 33, serve together as the pastors of five churches in one of the most isolated pockets of America. Their weekly acrobatics of military-precision timing and long-distance driving are what it takes to make Sunday church services happen in a place where churchgoers are aging, pews are getting emptier and church budgets are getting smaller.

That makes Appalachia much like the rest of the country when it comes to mainline Protestant churches.

Mainline denominations -- the historically indomitable Protestant institutions that were the backbone of early American respectability, including Methodist, Presbyterian and Lutheran churches -- are now on a precipitous decline.

From 2007-14, according to Pew Research, the number of mainline Protestants in the United States dropped by about 5 million people, leaving just 14% of Americans -- about 36 million -- identifying with any mainline denomination.

One in every five American adults was raised in a mainline church. But less than half of them continue to affiliate as adults.

That has left churches, especially in rural areas, facing the tough question of how to keep serving the members who remain. Some churches simply close. Others merge. And in an increasing number of places, rural and even urban, pastors are bringing back an old-fashioned concept: the circuit preacher.

"The circuit rider in a lot of ways was lost," Jason Felici said. "This is, in some way, the model of the future."

The Felicis, who started dating while both were in seminary to become ministers in the Evangelical Lutheran Church in America -- a liberal-leaning mainline denomination, not to be confused with conservative evangelical Christians -- have spent their careers facing these trends.

When they graduated seven years ago, the Felicis took up their call as the pastors not of one local Lutheran church, but five.

In these seven years, they have come to know individual deer by sight. They have become accustomed to a 100-year-old parishioner coating cotton balls in peppermint oil to get the smell out when the skunk gets under a church building. Their daughter, Emma, was born here, and they will welcome another child soon.

They have learned the signs of a church emptying out. There are the economic pressures -- jobs lost in Pendleton and Pocahontas counties that have forced families to move to Virginia or the District of Columbia; shrinking farm profits that have pushed people out of full-time farming.

This isolated corner of Appalachia is simply a hard place to live. The drive from the nearest city, Harrisonburg, Va., is at least an hour -- all the way up and down the steep mountain that separates this area from the outside world. Under decades-old law meant to preserve this area for scientific research, there's no cellphone service or radio in most of the two counties, which are in the National Radio Quiet Zone. In certain parts, even at-home wireless Internet or microwave ovens are banned to protect the research zone.

And then there are the religious trends -- Americans are growing ever more secular, with well over 20% now identifying with no religion at all. Conservative evangelical churches have shrunk, too, but not as rapidly as the mainline denominations, such as the Felicis' Lutheran church, that hold more-liberal positions on concerns such as same-sex relationships and the role of women.

"Many laity feel their traditions and cultures are lost when two local churches merge into one," said Bishop Kenneth Carter Jr.cq FJ, the president of the United Methodist Council of Bishops. Rather than mergers, therefore, bishops are turning more often to a circuit-preacher model. "The [Church] has a history of circuits," Carter said. "The practice of a pastor serving more than one church dates back more than 200 years."

Every Sunday, one of the Felicis starts the day at 7:15 a.m. with a 57-mile drive to the farthest of their churches, New Hope in Minnehaha Springs, W.Va. After the service, that pastor drives all the way back to Franklin, where the Felicis live, to preach at the 11 a.m. service at the church next door to their parsonage. Meanwhile, the other pastor makes a mad dash through three church services, which means leaving early and arriving back late to get it all done. Each pastor writes one sermon each week and delivers it two or three times.

Already, these five churches are a result of consolidation. These valleys were home to Mount Zion, St. Michael and others -- churches that West Virginia Lutherans still proudly proclaim as their home churches.

"There would be well over 100 people" at St. Michael on a Sunday, Beth Felten recalled as she tucked into the lunch after the service at Calvary Church in Brandywine, W.Va. That church is gone, and the congregation left at Calvary is far smaller, but it is still proudly baking for the monthly potluck -- chicken-noodle casserole and meatloaf, collard greens and tiny ham sandwiches, salad drenched in dressing and cheddar cheese.

The pastors and the congregants all know full well that these five churches will not last as they are. But no one is ready to talk about change yet.

"We have a significant number of people in their 90s and older who drive themselves. If they had to drive more than a mile and a half to get to their church, we wouldn't see them anymore," Jess said on one of the rare weekdays that she and Jason are at home together, instead of driving the long distances across their 75-mile-wide parish to visit sick or homebound members.

"When you age out of the volunteer firefighters or EMT, the church is the one place you have contact with people socially," said Jess, who grew up in the Harrisburg area.

Jason added, "People can name the parents, grandparents, great-grandparents who literally built the buildings with their own hands."

Through clergy networks on social media, Jason and Jess hear from pastors across the country who are new to circuit preaching. Their fellow circuit riders seek advice about how to maintain relationships with parishioners despite the long distances and about how to offer robust ministries when manpower is limited.

Jason and Jess tell these pastors how, come Sunday, they drive from church to church to church, holding the same service five times for a couple dozen people in each simple white-walled sanctuary.

When Jason drives the longest leg of the circuit, an hour and 15 minutes to Minnehaha Springs, sometimes he doesn't pass another car.

Jess drove one recent Sunday, in the other direction, toward their very smallest church, Mount Hope. "The thought of closing this church is just so grief-laden," she said as she drove up the hill, past the chicken barn she visits every year when the baby chicks hatch. "We all think about what it would be like if there weren't enough people to have a congregation here. We put it off. Because it's just painful to think about."

She pictured this church on its best night, when it fills to the brim on Christmas Eve. The young people who have moved away to Morgantown and Washington are home. The families too busy and exhausted to attend church more than once a year are there. "Everybody's spirits are glowing and the candles are lit and it's dark outside," she said. "I'm not sure I have the words for it."

She was almost at the church, the first one of the day. She thought of that sacred night, and the sacred spaces she and Jason create every Sunday.

She pulled up in front of the graveyard, where the faithful generations who sustained this church for more than two centuries are resting. She looked up at the simple building where their descendants carry on into an uncertain future. She turned off the car and opened the door.

Photo by The Washington Post/NORM SHAFER
Reverends Jason and Jess Felici load up Jason’s truck in Franklin, W.Va., as he gets ready to leave for the first of two services over which he will preside.