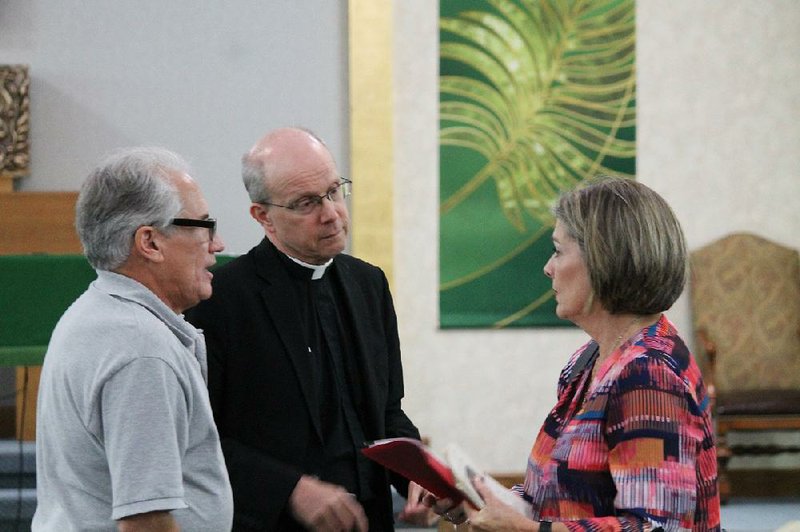 Miguel Prats (left), manager of the Maria Goretti Network, and the Rev. Gavin Vaverek, the network’s co-manager, speak with Diane Bausom of Conway at the St. Joseph Catholic Church in Conway on Sept. 27. Prats and Vaverek spoke about the self-help support organization for abuse survivors ahead of the debut of its first Arkansas chapter, set for next month. - Photo by Francisca Jones

A new support group for survivors of abuse will soon be available to people of any faith through the Catholic Diocese of Little Rock.

The Maria Goretti Network will hold the first meeting of its Arkansas chapter at St. Joseph Catholic Church in Conway in November.

Miguel Prats, a sexual abuse survivor, co-founded the Texas-based nonprofit with the Rev. Gavin Vavarek in 2004. Prats suggested they name the organization in honor of Maria Goretti, the patron saint of rape victims and abused children.

"The Maria Goretti Network is a peer support group that offers people a safe environment to come and talk about their experiences, and about the need for forgiveness," Vaverek said. The groups are lay-led and are intended for survivors of any form of abuse, and friends and family members supporting that person in healing.

Goretti is known for forgiving her killer, Alessandro Serenelli, who later had a vision of Maria and converted to the faith as a result. After serving his sentence, he sought out Maria's mother for forgiveness before living out the remainder of his life at a monastery and dedicating his life to Christ, according to the network's website.

Vaverek said the first group debuted in Longview, Texas -- the parish where he was serving at the time -- after he was unable to find a parish in a larger city in the state willing to host the chapter. The nonprofit now has chapters in Texas cities including Houston and San Antonio, a chapter each in Washington state, Kentucky and Arizona; and another in Chicago, which held its first chapter meeting last month.

The Arkansas chapter comes the year after a Pennsylvania grand jury report disclosed the abuse of more than 1,000 children by more than 300 priests over a 70-year span. Since then, dioceses in and outside the United States have released lists of clergy against whom credible allegations of sexual abuse have been made.

The Little Rock diocese released a list of 12 such clergy in September 2018, and added one priest and one religious brother to that list in February. None of the allegations involved priests currently in ministry in the diocese, and all were dated earlier than the 2002 Charter for the Protection of Children and Young People established by the United States Conference of Catholic Bishops.

Spokesman Dennis Lee said through email that the Little Rock diocese has been interested for a while in reaching out to survivors of abuse. Bishop Anthony Taylor decided to start a chapter of the network in Arkansas after learning more about it, Lee said, and the Rev. Tony Robbins, pastor of St. Joseph Catholic Church in Conway, offered the parish as host to the first chapter.

"We have had pastoral resources in place for victim[s] -- survivors of sexual abuse by clergy -- but there are a lot of people in our parishes who have been victims of abuse in other ways," Lee said in an email. "Our hope is that [those] who attend the [Maria Goretti Network] chapter meetings at St. Joseph in Conway will find them helpful for their healing and faith journey."

The chapter is the latest among the diocese's efforts to provide resources for those in emotional distress, which include support groups for women and men post-abortion, groups to help those with mental illness and their families, and for those affected by alcohol addiction.

In an open meeting Sept. 27, Prats and Vaverek described the meetings, which Prats said typically meet once a month for 60-90 minutes and are loosely based on a 12-step program format. There are opening and closing prayers. Each person gets a chance to speak if he or she wishes but cannot give or solicit advice from the other members.

"It's based on that [12-step] model, but we don't beat around the bush and say 'higher power,' we say 'Jesus,' we say 'Mother Mary,'" Prats said. "The wounds affect not just your body. It's your soul, and the only way you can heal from some things is through the grace of God."

Prats said he was sexually abused for the first time by a mentally handicapped neighbor at the age of 5, and again by a Catholic priest when he was a teenager.

"I was very dysfunctional for many years," Prats said. "Drugs, sex, alcohol ... it was just not a good lifestyle."

Prats said he had largely "blocked out" the abuse until the Boston Globe published a series of investigative reports in 2002 about the cover-up of sexual abuse in the Catholic Church. He joined the Survivors Network of those Abused by Priests, a nonprofit support system network, but said he didn't find healing until, with Vaverek, the Maria Goretti Network was founded and there was a safe, confidential space for disclosure and healing.

"With time my anger has dissipated, and that's just amazing," said Prats, who will be on hand for the first couple of meetings for training and guidance.

Robbins will facilitate the men's groups; the facilitator of the women's groups has not yet been announced.

"We are now actively finding people who have been hurt to come for healing, and the healing comes through their personal relationship with Jesus and their way to find forgiveness," Robbins said.

In preparing for the support groups, Robbins has acquired a relic of Goretti to have as a presence at the meetings -- the result, he said, of a trade with the Rev. Stephen Gadberry of St. Cecilia Catholic Church in Newport, for a relic Robbins owned of St. Cecilia.

"She does have a powerful story of forgiving her attacker," Robbins said in advance of last week's informational meeting.

He added that the relic is "a powerful display of really what our dignity is, as children of God, and it carries through this life into eternal life.

"It takes courage for somebody to look for that healing," Robbins said, referring to the support group. "Forgiveness doesn't come cheap, and we need to help each other to courageously arrive there."

The chapter will meet the first Saturday of each month from 10-11:30 a.m. in the Spiritan Center of St. Joseph Catholic Church in Conway, beginning Nov. 2. More information on the network can be found at mgoretti.org.