The movie that couldn’t be made, was made. And much to the dismay of anyone who saw it or was involved in making it.

Myra Breckinridge was (and is) one of the most notorious flops of all time. It was rated X (which was the NC-17 of 1970.) And rightly so.

Not only was it a disgusting mess of a film — with every filthy idea a puerile 16-year-old boy could come up with — it wasn’t funny, and that to me is its biggest failure.

Based (very loosely) on Gore Vidal’s satire, Myra’s first strike was casting Raquel Welch in the title role of the transgendered Myron (Rex Reed). Welch couldn’t act her way out of a paper bag, as my father used to say. And even though she was lovely, and wore some fantastic outfits, she couldn’t carry the film on her shoulders. (Reed was actually OK as Myron, who shows up from time to time to counsel Myra.)

Strike two was the plot. Myron has a sex-change operation to become Myra, so she can claim half of the estate of her lecherous Uncle Buck Loner (John Huston, who must have needed a paycheck). He runs an acting academy. Lots of sexual deviancy, debauchery and decadence. It didn’t make much sense to me. Again, it wasn’t funny.

Strike three was the director. This from IMDb: “Michael Sarne was hired as writer-director because 20th Century-Fox wanted to tap into the youth market. Sarne didn’t want the assignment but felt he had little choice, as he desperately needed the money after several failed years in Hollywood (he was not a fan of the book and even less of a fan of Gore Vidal, who he felt sided with Rex Reed in an attempt to play up the film’s ‘gay agenda’). Vidal wrote in Esquire that when he found out the film’s director Michael Sarne was working as a waiter in a pizza restaurant, he said it ‘proves that God exists and there is such a thing as Divine Symmetry.’”

The one interesting point is Mae West (as Hollywood talent scout Letitia Van Allen) who, at 78 was still feeling her oats. She got to sing two songs (which were part of her contract for making the film) and wrote her own dialogue. Maybe that’s why her lines are better than everyone else’s. She sings the Otis Redding song “Hard to Handle” and “You Gotta Taste All the Fruit.”

From IMDb: “Raquel Welch later said she was fascinated at working with Mae West, mainly because she could never actually figure out if West was a man or a woman.” They did not get along during filming, according to studio wags.

The film also uses many clips from older (and better) films from the Fox library. Several actors threatened to sue the studio if their likenesses were kept in the clips. Not surprisingly, the clips are the “bright spot” part of this film. (Is there a bright spot on a dung heap?)

From IMDb: “It was not so much the box-office failure as the complete and utter critical savaging of the movie — a reception that could only be termed as ‘disastrous’ — that wrecked the careers of director Michael Sarne and actor Roger Herren. The critical and financial flop also seriously hurt Raquel Welch, who never achieved the true star status that had been predicted for her.” In all fairness to Welch, she did improve with age and several of her later films proved that, starting with The Three Musketeers. 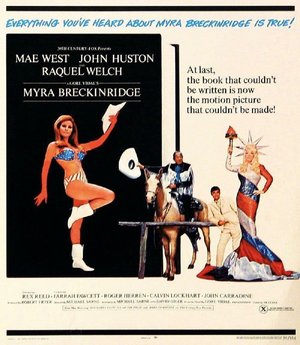 Myra Breckenridge is considered one of the worst films ever made. The movie that couldn’t be made, was made — and we were all the poorer for it. Or at least 20th Century Fox was. And for lots of reasons.