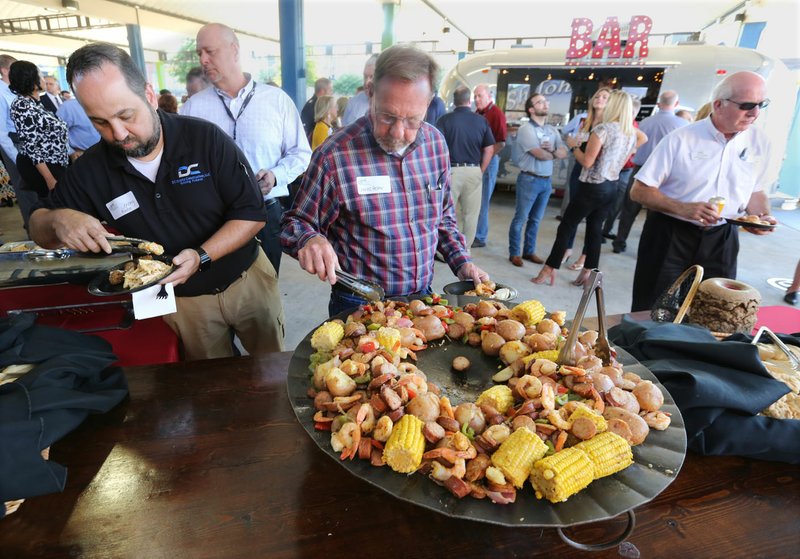 The Springdale Chamber of Commerce annual "Chickin', Peelin' & Politickin'" dinner routinely draws state constitutional officers and lawmakers, along with members of Congress. Thursday's event starting at 4:30 p.m. at Shiloh Square in downtown Springdale was no exception in that regard. But the chamber made a concentrated effort to invite more local and city officials, said chamber president Perry Webb. The number of non-politicians attending increased by even more this year, he said.

The chamber started the dinner in 2011 and hasn't missed a year to date.

Third District Rep. Steve Womack, a Rogers Republican, said he wished he had been able to bring U.S. Rep. Derek Kilmer, D-Wash., to the event. Kilmer joined Womack for a two-day whirlwind tour of Northwest Arkansas but had to leave Wednesday. The tour was organized by American Congressional Exchange of the Bipartisan Policy Center in Chicago. The tours are intended to encourage bipartisan cooperation and understanding. Kilmer's visit was in return for a similar visit Womack made to Kilmer's district in September of last year.

"This is exactly the type of event where people of different political stripes get together and cooperate," Womack said of the dinner. "I wish he [Kilmer] could have seen this. It is what we are trying to encourage in Congress."

Womack spoke at the event, giving a shout-out to Lt. Gov. Tim Griffin. Griffin and Womack both won election to the U.S. House in 2010. Griffin, a Republican, returned to the state and ran successfully for lieutenant governor in 2014. Griffin's trip to the event required a three-hour drive.

"This event proves you can have a good time even when elected officials are around," Griffin said.

The event's site is in the legislative district of a Democrat, state Rep. Megan Godfrey of Springdale. Godfrey appreciated the chamber hosting the event in downtown Springdale, she said.

"This is a great crowd and a great chance for people to meet," she said. "It really shows off the Shiloh Square and the rest of the downtown. I'm very excited they [the chamber] keep coming back."

The event was held at Arvest Ballpark until 2017. That year, the chamber and sponsors such as Sam's Furniture and Tyson Foods wanted guests to see progress in Springdale downtown revitalization, Webb said that year.

"We wanted to support the downtown, have people see our park," Web said in 2017. "The size was right and the location was better."

State Treasurer Dennis Milligan also made the trip from the state capital to attend Thursday. He called the event one of the best of its kind for the private sector and the public to meet in a relaxed, conversational setting. "This region of the state is dynamic and this is an example of why," he said.

U.S. Sen. John Boozman, R-Rogers, joked he had been to political events all over Arkansas and what he appreciated most about the Springdale event is the cuisine of chicken and shrimp, especially compared with the annual Gillett Coon Supper in Arkansas County.

"This is a place where the movers and shakers work together," Boozman said.