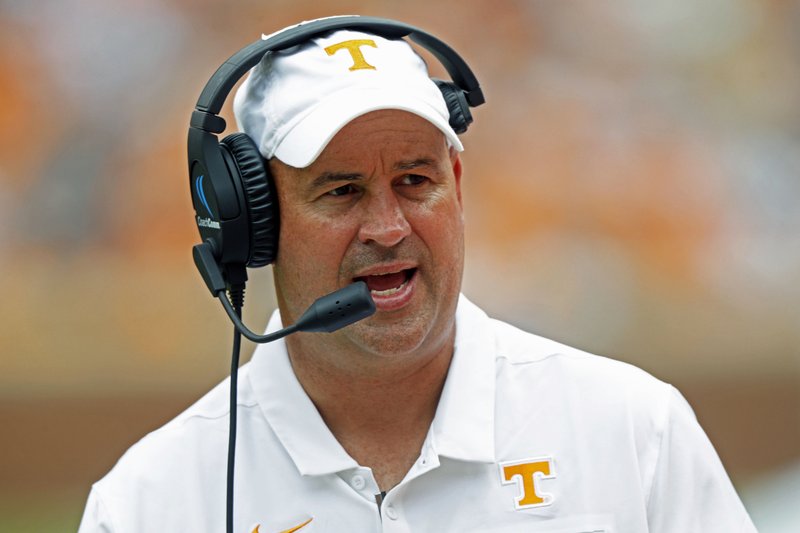 Tennessee head coach Jeremy Pruitt yells to his players in the second half of an NCAA college football game against Chattanooga, Saturday, Sept. 14, 2019, in Knoxville, Tenn.

Of all the college football perches where one could alight this Saturday, the most intriguing would have to include the upper reaches of the great Neyland Stadium in Knoxville, Tenn. Climbing those steps could afford both the usual lovely view of the Tennessee River and an unobstructed vista onto the nature of fandom, concerning a fan base to whom fandom has been unkind for such a bad, long time now.

Up there might one sit, maybe even with ample space and peace, and maybe even admire those fans who still climb the stadium stairs with hope, as No. 3 Georgia reaches town to play long-woebegone Tennessee, a game promising fascination but not the kind most seek in stadiums.

In many a college town, football victory can seem to sprout from civic craving, as if the public's thirst for major success serves to mandate that it happens -- at least every now and then, if not at an Alabama rate. Somehow, even after 11 seasons of ricocheting between lukewarm, worse than lukewarm and the occasional turn of quite good, Tennessee has lost games during the past three seasons by 41, 38, 33, 20, 18, 26, 26, 26, 37, 33, 25 and 31 points.

Somehow -- there's that word again -- none of those losses qualifies as the worst.

The worst came Aug. 31, when Georgia State, which ended last season with a 2-10 record and began this one with a helpful forecast of last place in the Sun Belt Conference, came to Neyland Stadium, beat the Volunteers, 38-30, and, probably even worse, in a case of near-blasphemy, outrushed them 213-93. It seemed the Panthers sort of pushed them around.

"Calling it an 'upset' doesn't do it justice," wrote John Adams, the estimable columnist and witness to just about everything under the football sun and clouds across the decades. "This was the worst loss in the modern era of Tennessee football."

It took a hopeful offseason and good recruiting season for Coach Jeremy Pruitt's second season, and it gave it a mean puncture.

As Georgia State moved on to lose, for example, 57-10 at Western Michigan, in came Brigham Young, which won at Neyland in overtime weeks before losing 28-21 at Toledo. From there, the Vols won, 45-0, against Tennessee-Chattanooga of the Football Championship Subdivision, then lost, 34-3, at their fans' object of loathing, Florida of the SEC East Division.

This has gone on for so long that it's possible to have made a trip to Knoxville in 2013 to discuss the malaise, to learn about how the difference between, say, 10-2, and, say, 5-7, matters deeply in apparel sales, in restaurant receipts.

Maybe it's obvious, but people don't buy as many programs for 5-7 teams.

Six years later, most of them really long, and through the 34-27 era of Butch Jones, Tennessee has reached this particular week, on which Adams writes, "The bar of UT football has dropped so low that raising the possibility of a competitive game against a ranked opponent seems far-fetched." No matter whom one blames, it's just about mysterious that this could happen for so long, given the public's great interest.

All the way into this week, it seemed prudent to check in on some Knoxville talk radio, still a worthwhile endeavor even in Twitter days because it includes the persistent sound of human voices.

Of course, some of the talk centered around the case of linebacker Jeremy Banks, who in the middle of the night of Sept. 15 had a set-to with the police involving an improper U-turn, during which he was arrested on an outstanding warrant for failing to appear in court for an earlier citation. Banks has apologized profusely for directing profanity toward the officers, but the whole thing wound up with Pruitt on tape from the phone call with police, wondering why Banks was arrested and saying, "I've worked at four places, and I ain't never had no crap like this except for here."

On one radio show Thursday afternoon, a caller named Joe doubtless spoke for many. He talked for a while about the Banks arrest and how Banks might utilize it to spur him toward the better. He closed with, "I love my Tennessee Vols, and like I tell people, it's gonna be hard, it's gonna be a long road to get back to where we need to be."

He added: "Only silver lining, Auburn's going to Florida and they're gonna destroy them."