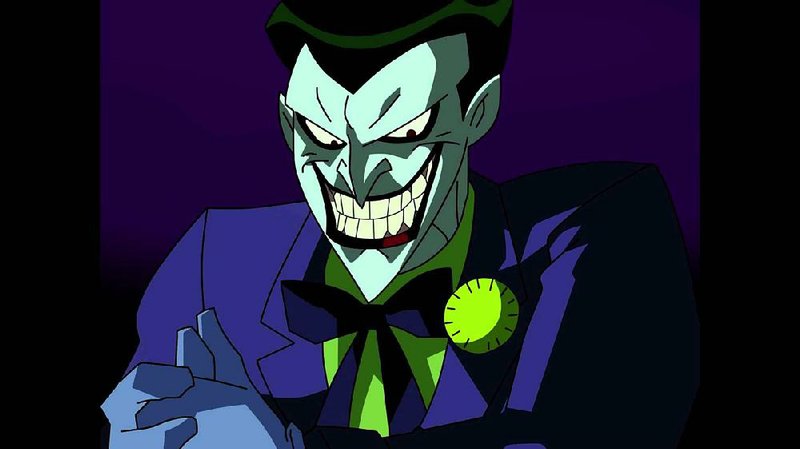 Luke Skywalker himself, Mark Hamill, has for 27 years provided the voice of the animated Joker, which our columnist argues is the best Joker.

It's finally here, the solo villain movie of the year a lot of people have been looking forward to since it was announced. By the time you're holding this newspaper in your hands, I'll have already witnessed Joaquin Phoenix's portrayal of the infamous clown prince of crime.

But since I'm writing this on a Tuesday before watching the film, I feel it's worth discussing which actor did the best job portraying Batman's arch-nemesis. And, since there have been so many Jokers out there, I'll go ahead and limit this article to those who have portrayed Mistah J on the big screen.

I'll go ahead and get Cesar Romero out of the way. This was obviously a Joker well before my generation, and as such he's at the bottom of my list. I'm aware the Adam West Batman series and subsequent 1966 film are clearly meant to be light and campy. The Joker is more of a felony prankster than a mass murderer.

And while Mr. Romero fit the bill for that portrayal well, I've never been a huge fan of that particular interpretation of the character. Some humor is expected with the Joker, and welcomed at that. But it needs to remain a piece of the pie that makes up this nasty villain. There needs to be psychotic and malevolent intent for the character, and Mr. Romero offered little of that.

So he goes to the bottom of my list. My apologies to fans of the '60s series and movie but, my column, my rules. I want a violent Joker, not a silly man who refuses to shave his mustache for the part. I haven't seen facial hair cause such a ridiculous comic book movie related ruckus since Henry Cavill's awful mouth CGI in Justice League.

Being fair and playing by my same rules of wanting a serious Joker, I have to put Zach Galifianakis' portrayal of the Joker in Lego Batman toward the bottom of the list as well. Again, it's not that Galifianakis did a terrible job. His Joker certainly made me laugh. I'm well aware of the fact it was a movie aimed at a younger demographic. Still, I want my Joker to sew chaos in Gotham because his twisted psyche sees Batman put on a mask and bend the rules, inspiring him to do the same on the opposite side of justice.

I don't want the Joker's motivation to be because Batman refuses to acknowledge him as his #1 arch-nemesis, hurting his feelings. If you want to put a famous Batman villain in a kid's movie, use the Riddler or the Penny Plunderer, not the clown prince of crime.

Jared Leto's portrayal of the Joker falls right above both of these guys on my list. Suicide Squad is just an all-around bad movie with a couple of shining performances. Neither come from Leto. They come from Will Smith and Margot Robbie. Viola Davis and Jai Courtney were OK. The interpretation of the Joker was not.

Leto's performance as the Joker was just ... weird and not in a good way. I'm used to seeing the Joker doing chaotic and humorous things. It's kind of his shtick. But the way this Joker would lie inside a circle of knives and say things like, "HUNKA HUNKA!" didn't seem like the clown prince of crime. They reeked of someone trying too hard.

The way he had a laughing mouth tattooed on his hand and silver teeth made the Joker look like a person trying to put his own spin on the Joker at Halloween. His makeup is weak. His hair is basic. His tattoos are overdone. And then there's the way he spoke, more rabid dog than insane punchline. It was as if all the wrong ways to play the Joker came together into one performance.

Was he threatening? Meh. Did he kill people? I guess. But is that really where we wanna place the bar for such an iconic villain as the Joker? I expect more if someone is going to slap on clown makeup and go toe-to-toe with the Batman.

As we enter the top three cinematic Joker performances on my list, allow me to start with Jack Nicholson. And from here on out, I really have nothing but good things to say about actors who played the character. Jack Nicholson's performance as the Joker is best described as terrifying showman.

When he makes his introduction as the Joker in 1989's Batman, he's scary and entertaining at the same time. The way he steps out of the shadows just before killing Mob boss Carl Grissom and says "Call me Joker" or the way he asks Bruce Wayne, "You ever danced with the devil by the pale moonlight?" is just so menacing. You don't need epic music because Nicholson's voice combined with background silence is unnerving enough.

He plays the Joker with a mobster vibe, not a punk reject vibe like Leto tried for. It's classier, it's meaner and it actually gets things done. The 2016 Joker talked a lot about killing and danger (when you could understand him), but the 1989 Joker actually did kill lots of people with a chemical that had them laughing until their dying breath.

The only reason Nicholson isn't higher on my list is because of Heath Ledger, who was so dedicated to the role, that he pulled off the greatest live-action Joker performance in the 80-year history of the character. Christopher Nolan ensured everything came together flawlessly in The Dark Knight. Christian Bale's Batman, the story of prying Gotham from gangsters only to have it fall into the chaos of a brilliant criminal like Bane in the final installment, and the absolute terror and chaos personified by a man who just wanted to watch the world burn in Dark Knight.

When Ledger gives conflicting stories for the scars on his face, I didn't know which was accurate or if either were. I didn't care. I was enthralled. When he took half of the money from every gangster in town just to burn it, I laughed. And when he brought an entire city to its knees by riling up the population to reveal Batman's true identity in order to stop ongoing terrorist attacks, I marveled at his scheming.

It's a crying shame Ledger is no longer with us. I would love to see how his character would have fit into The Dark Knight Rises. Every Joker that comes after him will have the Ledger shadow around him. It's a shadow that swallowed Leto whole. But it doesn't seem like one that'll swallow Phoenix.

And that would round out my list if it weren't for the greatest Joker of all time. If you read my list of top Batman performances, surely you'd see I was going in the exact same direction with this column as well. The greatest Joker performance belongs to Mark Hamill, Luke Skywalker himself.

He hit the big screen as Joker with 1993's Batman: Mask of the Phantasm. Some may think it's a cop-out to declare an animated version of the Joker as the best of all time, but it does contain a key advantage. The art style can change through the years (as comics and movies do), but Hamill's voice remains the same.

And what a voice he uses for the Joker! What sells it the most for me is the character's iconic laugh. What kind of name would "Joker" be if there wasn't any laughter, another lesson Mr. Leto should have learned while preparing for the role.

Mask of the Phantasm provides the greatest Joker laugh in character history. It comes at the end as the woman who intends to kill Mistah J once and for all starts to vanish into a cloud of smoke, clutching a bloodied-up Joker. The howling laugh he lets out knowing Batman failed to stop The Phantasm from capturing her prey, and in spite of the mortal peril the Joker finds himself in, is bone-chilling.

Through the animated series, through Mark of the Phantasm, through current DC animated movies, Mark Hamill continues to shine as the Joker. He hasn't lost a step. He sounds just as maniacal now as he did when he landed the role in 1992. It's perfect.

For me, the greatest Batman portrayal of all time goes to Kevin Conroy. And the greatest Joker performance right alongside him belongs to the son of Vader. I'm eager to watch Phoenix's Joker, and we'll see where he ranks on the list. But for now, Hamill is top dog.

Print Headline: Clowns to the left of me, Jokers to the right