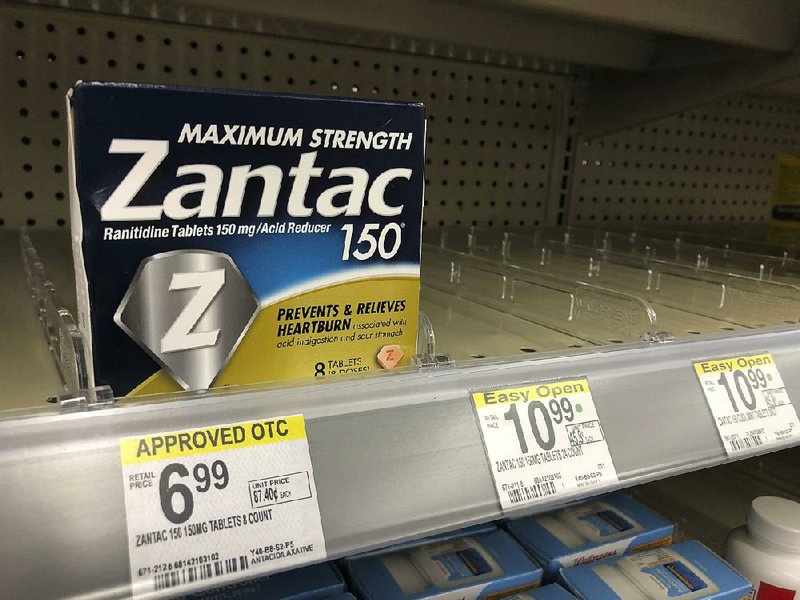 Walmart Inc. has suspended the sale of all over-the-counter versions of the gastric-acid blocker ranitidine, the active ingredient in Zantac, over concern that some may contain cancer-causing contaminants.

Walmart has become the latest store to halt sales of the popular heartburn treatment Zantac after health regulators warned about a potentially dangerous contaminant in the drug.

The nation's largest retailer said Wednesday that it suspended sales of all drugs sold over the counter, or without a prescription, that include Zantac's active ingredient, ranitidine. Aside from Zantac, that includes Equate and Member's Mark brands.

The U.S. Food and Drug Administration said last month it detected low levels of nitrosodimethylamine, a suspected cancer-causing chemical, in Zantac and related generic drugs to treat ulcers and reflux disease. The same chemical has been linked to dozens of recalls of prescription blood pressure drugs in the past year. That has sparked a recall of millions of pills in about 30 countries.

A recent series of drug recalls has raised concerns about the safety and integrity of the U.S. drug-supply chain and the capacity of regulators to adequately police a sprawling global network of pharmaceutical suppliers.

Walmart said patients could return the drugs to its Walmart and Sam's Club stores for a refund. Walmart has pharmacies in thousands of its U.S. stores. The FDA has advised consumers who take ranitidine medications for heartburn and other stomach ailments to consider alternative therapies while the agency investigates the suspected contamination.

Some versions of Zantac have been recalled in the U.S. by manufacturers. Canadian generic-drug maker Apotex Inc. recalled ranitidine that it made for Walmart, Rite Aid and Walgreens last month. Novartis AG's Sandoz unit recalled generic prescription ranitidine in the U.S. after detecting elevated levels of nitrosodimethylamine, a type of nitrosamine.

Nitrosamines can cause tumors in the liver and other organs in lab animals, and they are believed to be carcinogenic in humans. Nitrosodimethylamine can form during manufacturing if the chemical reactions used to make the drug are not carefully controlled, the FDA has said.

Ranitidine is a histamine blocker that works to lower the acid created in the stomach, according to the FDA. The medication is sometimes prescribed to prevent ulcers of the stomach and intestines as well as gastroesophageal reflux disease, the agency says.

The European Medicines Agency is also reviewing the drug. Canada has ordered a halt to all distribution of ranitidine while it investigates.

Information for this article was contributed by staff members of The Associated Press, by Timothy Annett of Bloomberg News and by Sandra E. Garcia of The New York Times.