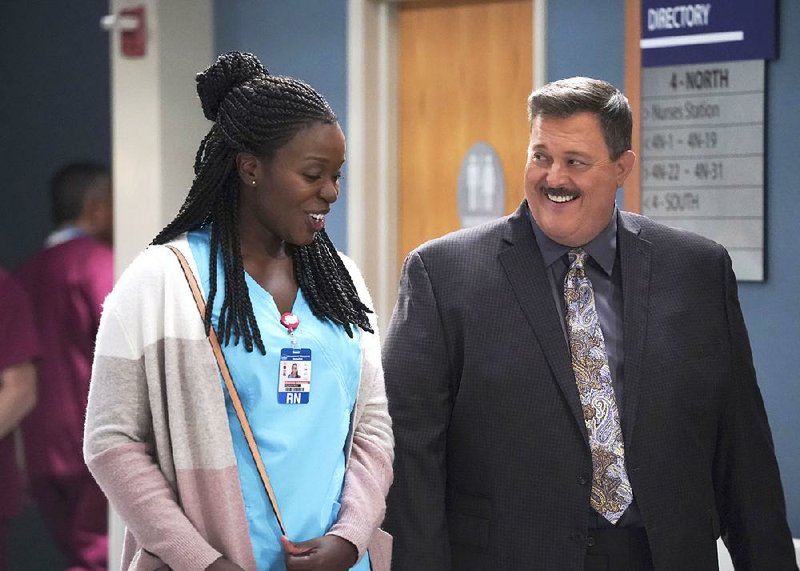 Folake Olowofoyeku and Billy Gardell have the lead roles in Bob Hearts Abishola, a new CBS sitcom about a cardiac patient who falls for his nurse after his release from the hospital.

NEW YORK -- A funny thing happened to Folake Olowofoyeku on the way to a career in law: She became a theater major against her parents' wishes and headed straight into the business after earning her undergraduate degree.

Her Nigerian parents were so hell-bent on launching her into the family profession of law that they named her after the first female Senior Advocate of Nigeria, a title conferred on legal practitioners who have distinguished themselves.

A similar scenario is present for Olowofoyeku in Bob Hearts Abishola, her CBS comedy series that premiered Sept. 23.

Olowofoyeku plays Abishola, who's determined that her young son, Dele, makes it into Harvard and becomes a doctor. Like her own parents, Olowofoyeku said in a recent interview, Abishola "has a specific dream for her child born out of love and protection."

"Abishola is parts my mom, parts my aunties, parts women I grew up with in Nigeria," the 35-year-old told The Associated Press. "My teachers, people I was surrounded with. I'm pulling from all of them to create her."

Extended family plays out on the show. Abishola and Dele live in a small apartment with an aunt and uncle. Bob, a white American compression socks salesman played by Billy Gardell, is in business with relatives. He lands in her life as a patient after a heart attack. He's smitten and pursues the deadpan, hard-working cardiac nurse after his release as both manage their stressful, quirky families.

Olowofoyeku grew up on affluent Victoria Island in Lagos, with frequent London summer vacations. She arrived in New York on her 18th birthday, first pursuing modeling and then attending City College of New York. While there, she acquired a love of basketball and played for the CCNY Beavers.

"It was glorious," she said of those years in the city. "I wanted to find the school farthest away from my sister on Long Island, which was Harlem. I wanted to move out on my own."

After she entered the acting business, there was curiosity about how her name would play out professionally. Her agent at the time "very nicely" asked if she'd consider changing it. Olowofoyeku declined.

"She didn't push, and I had considered it, but there's so much value placed on our names in the Yoruba tribe in Nigeria. It never seemed like the right thing to do. I did, however, get pressure to close my gap, but then I also got a lot of work because of my gap and now the gaps are in," Olowofoyeku smiled, showing off the space between her top front teeth.

Olowofoyeku has worked steadily. In addition to short films, she was in Female Fight Squad and Hellbenders on the big screen, among others. She's not new to TV, appearing on Transparent and Modern Family. She scored a spot in David Bowie's music video for "The Next Day." She's done voice work, video game work and continues to pursue music.

Her first love was music. She taught herself electric guitar, plays a bit of piano and became a sound engineer. She still loves singing, but acting drew her in. While working in theater, she found her way into a lot of comedic roles, "but I would never have thought I would have ended up in a sitcom," she said. Comedy isn't "something I specifically pursued, but I'm grateful for it."

The sitcom king, Chuck Lorre, created and co-executive produces the show. His advice: "Be as authentic as possible and there you'll find the humor," she said.

Olowofoyeku attributes much of that authenticity, in terms of the "Nigerian aspect of things," to Gina Yashere, a British Nigerian comic who's one of the writers -- another rarity for American TV.

"I think it's invaluable. I'm not quite sure how those intricacies would have been revealed without her. She thinks about things that would never even occur to me," Olowofoyeku said.

She also gives props to Gardell, a comedian who co-starred in another Lorre sitcom, Mike & Molly.

The youngest of 18 to 20 children -- "maybe more" -- born to her father and his multiple wives, Olowofoyeku has lost both of her parents so will never know their reactions to Bob Hearts Abishola, which uses the heart emoji rather than the word in its title.

Her father was about 60 when she was born, and her mother died about 10 years ago.

"He was a great guy," she said. "He took a boat to England to study law at the London School of Economics."

Her mother was a "dynamic woman, so strong, super beautiful," she said. It's only in recent years that Olowofoyeku has grown to accept "being pushed away from my passions, being discouraged from my passions."

Though co-leading a comedy cast, Olowofoyeku is almost impeccably earnest. It was "just work" when she shot the Bob Hearts Abishola pilot, but the second script sealed the deal.

"I read that episode and I laughed so hard," she said. "And I'm not easy to laughter."