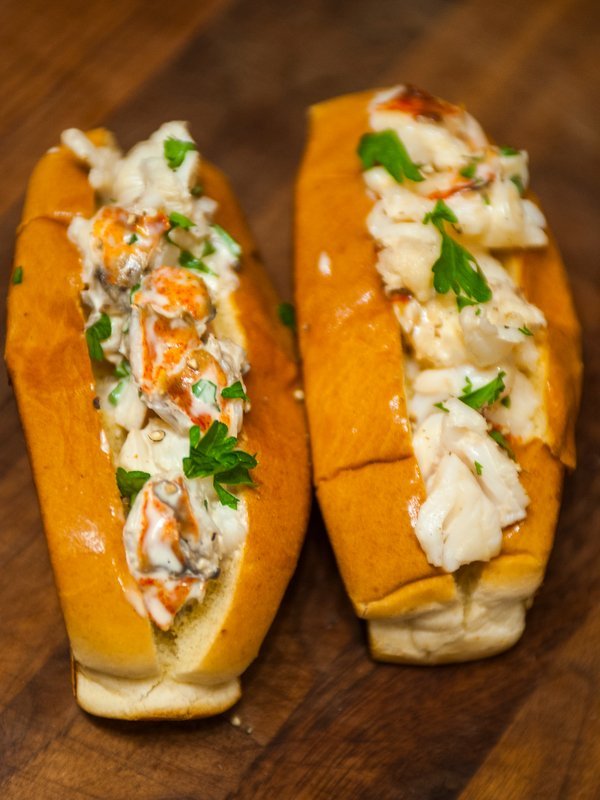 What started as a craving for a lobster roll at the Main Street Food Truck Festival in Little Rock turned into a home meal after discovering the line for the food truck wrapped around a city block. With lobster season approaching there is no better time to roll your own lobsters and here is how.

There are a few variants to lobster rolls, ranging from nothing but bread, butter and lobster, to a garden on a roll. Most lobster roll lovers have strong preferences as to which is the best.

I opted for a New England-style roll, the most loaded of the variants, which is still very simple.

This recipe makes two rolls, so you can share a roll with someone (or you can indulge in both)!

Bring a medium pot of salted water to a low boil, add both tails. Cook until tails are bright red and the flesh can be pierced easily with a fork, 10 and 15 minutes. Remove tails from water and let cool. Cut the top of tail from the opening to the end of the tail — I find scissors the easiest way to do this — and remove the meat. Cut the tail meat into quarter- to nickel-size pieces and place in a large bowl.

In a separate bowl, combine the mayonnaise, hot sauce (if using), celery, most of the parsley (reserve a little for garnish) and green onion tops. Squeeze half a lemon into the bowl and mix thoroughly. Lightly add salt and pepper to taste.

Slowly add the mayonnaise mixture to the lobster meat, mixing gently so you don't break up any of the lobster meat as we want to keep it chunky. Use as much or as little sauce as you like. Use immediately or cover and refrigerate for about 5 minutes to cool slightly.

To assemble: Prepare the buns last so they are still nice and crispy when you serve the rolls. Slice a thin bit from the outside of each bun to create a flat edge to allow for even toasting. Lightly brush melted butter on each side of the outside of the bun and toast in a skillet over medium high heat until browned to your preference. Let cool slightly and gently spread open to prepare for placing the lobster.

If desired, add a lettuce leaf to the opened roll. Spoon half of the lobster mixture into each roll. After settled in pour a little of the remaining melted butter over the entire roll and garnish with a little chopped parsley and coarsely ground pepper.

Serve with your choice of seasoned potato chips.