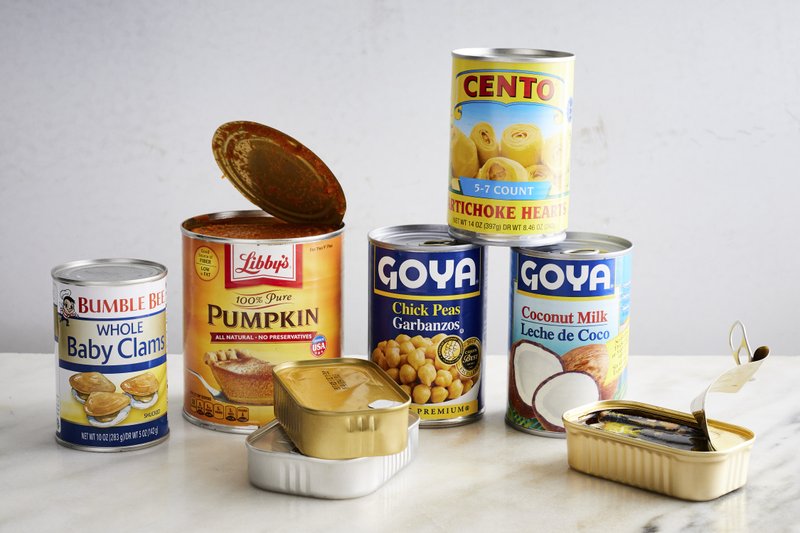 Canned foods in New York, Sept. 13, 2019. When used with care, ingredients like canned artichokes, pumpkin, chickpeas and coconut milk can turn the monotony of weeknight cooking into a semi-homemade form of art. Photo by Ryan Liebe (The New York Times)

Like many ingredient-obsessed cooks, I hit the farmers market once or twice a week. I eat my Brussels sprouts and squash in October, my asparagus and rhubarb in June, and not a whole lot beyond potatoes and onions in February. Fresh, local and organic is my kitchen mantra.

Yet when I start dreaming about the most delicious dishes I've ever eaten, Mrs. Ruby's molten, cheesy artichoke dip, made with canned artichokes and topped with a spiky crown of French's fried onions, is one of the first things that springs to mind.

Mrs. Ruby was a family friend when I was growing up, and while she admitted she wasn't a great cook, she could wield a can opener like a Jedi master.

Her repertoire ran deep — canned cranberry and pecan cream cheese log, canned crab salad with curried mayo on tomatoes, classic Key lime pie — but my personal favorite was that artichoke dip, so insistently hot and gooey that if you weren't holding tight, your breadstick might snap and sink into the quicksand depths of the casserole dish. She served the dip over a can of Sterno, and by the end of the night the bottom was crusted and browned, like the prized tahdig on a pot of Persian rice.

Mrs. Ruby might be the reason that, as much as I worship the fresh and the local, I have an enduring soft spot for the can.

A safe and convenient way to preserve and transport food, modern canning was invented in France in the early 19th century as a way to feed the troops during the Napoleonic wars. Americans enthusiastically embraced foods in cans, and they have become so enmeshed in our national cooking identity it makes you wonder if Thanksgiving dinner would even exist without them.

But the joys of canned foods go beyond pumpkin pie and the convenience of being able to cook dinner from your pantry during a snowstorm.

The best canned foods transcend their fresh counterparts to become something completely different — and often superior. And when used with love and care, canned foods can turn the monotony of weeknight cooking into a semihomemade form of art.

Take, for example, canned seafood such as sardines, anchovies and tuna. The amount of salt and olive oil used in their preservation makes them seem closer to salami than to fish, and that's all to the good. They are rich and complex, and indispensable for sardine and onion sandwiches, Caesar dressing and tuna melts, none of which would taste right made with pristine, fresh filets.

Or take sweetened condensed milk. A syrupy alternative to fresh cream, it has given rise to an entire genre of beloved desserts and beverages — Vietnamese iced coffee, no-churn ice cream and tres leches cake among them. Along those same lines is canned coconut milk, which is so vastly easier than finding a coconut and extracting the milk that only the most committed cooks even consider the idea of making it from scratch.

No ode to canned foods would be complete without beans, essential pantry mainstays that you can use in near-endless variation. Add them to soups and stews, saute them with vegetables, simmer them with tomato sauce, crisp them in the oven, or puree them into dip or fritters or pasta sauces.

Of all the dozens of varieties on the market, canned black beans and chickpeas are so vital to my sense of well-being that I get a little panicky when I run out. I love the chickpeas in hummus and curries, and roasted with vegetables and spices. More often than not, the black beans get stirred into my easy vegetarian chili, a weeknight recipe that is faster, more healthful and a whole lot cheaper than takeout.

Canned foods tend to be economical, but they aren't always inexpensive. The chef Alex Raij, an owner of Saint Julivert Fisherie and La Vara in Brooklyn, and Txikito and El Quinto Pino in Manhattan, has been known to use $50 cans of baby eels and $25 tins of anchovies at her restaurants. At home, though, she takes a less extravagant approach.

"I think chefs get so wrapped up in talking about elite, fancy stuff in cans that we forget about all the normal things that you can get at the supermarket and use in clever ways," she said.

Her favorite hacks? Mixing canned smoked mussels with white beans to add smoky flavor, and mashing up canned peas with parmesan as a sauce for pasta.

"I grew up on canned Le Sueur peas sitting in sugar water," she said. "I'll still eat them directly out of the can. They are mushy and sweet, and I love them."

Not having been raised on canned meats myself, I have no deep-rooted affection for them. And though I can appreciate the soft, sausagelike brawniness of fried Spam, I don't crave it the way I do that cheesy artichoke dip with all those sweet, crispy fried onions.

Which brings me to the singular merit of keeping canned artichoke hearts in the pantry: You can mix them with cheese and bake them at a moment's notice.

This isn't to say canned artichokes are better than fresh ones. But what are the chances that you'd want to slice up fresh artichokes that took you over an hour to trim, acidulate, de-choke and steam, and then bury them in a dish of hot cheese and fried onions?

But with canned artichokes, the more cheese and fried onions, the better. I think it's even more perfect with cooked pasta stirred in, along with loads of fresh herbs to offset the richness, before the whole thing is baked into a golden, crunchy-topped casserole.

And you can even serve it with a fluffy green salad made from seasonal, organic, farmers market greens if you like. Because there's no vegetable from a can that will satisfy when you're in the mood for a giant bowl of fresh, ruffle-edged red leaf lettuce or spicy, floppy arugula dressed with lemon, garlic and olive oil.

Happily, there's room at the table for all of it. 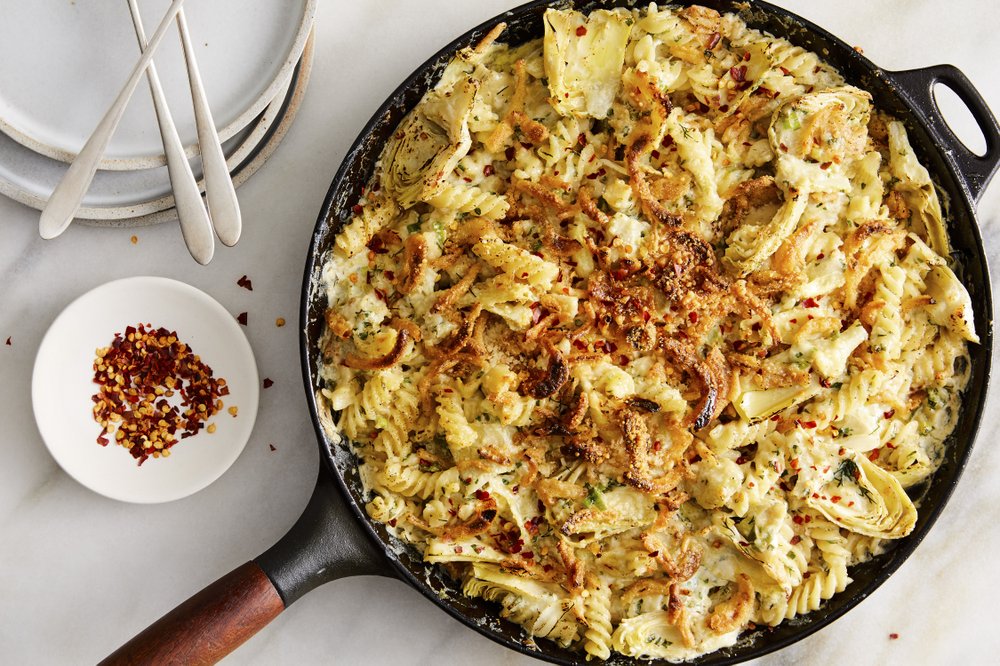 2 cups canned fried onions such as French's, divided use

Heat oven to 425 degrees. Bring a large pot of heavily salted water to a boil. Cook fusilli according to package directions until 3 minutes shy of al dente. Reserve 3 cups pasta water, then drain.

Whisk in 1 ½ cups pasta water, cream cheese and goat cheese, and simmer, whisking, until smooth. Stir in artichokes, 1 cup fried onions, the mozzarella, the parsley, the dill and the reserved onion greens, then stir in cooked pasta and black pepper. Add more pasta water if it seems too dry; you want this to be fairly liquid because the pasta will soak up the sauce as it bakes. Taste and add some salt if needed.

Top pasta with remaining cup of fried onions and the parmesan. Bake until filling is bubbly and onions are browned, about 10 to 20 minutes. Serve drizzled with olive oil, and with more red-pepper flakes on the side if you like. 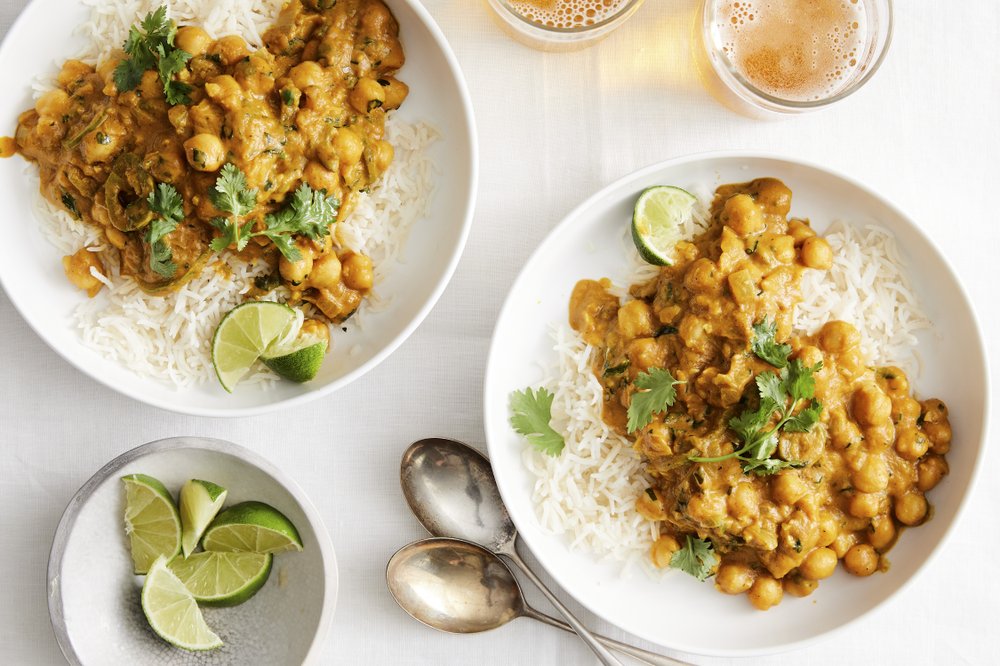 3 tablespoons neutral oil, such as sunflower or canola

2 jalapenos, seeded or not, thinly sliced

2 to 3 tablespoons fresh lime juice, plus wedges for serving

Heat oil in a large skillet over medium-high heat. Stir in onion, jalapenos and bay leaf. Cook, stirring occasionally, until onion is golden on the edges, about 8 minutes.

Add ginger and garlic and cook until fragrant, about 2 minutes, stirring frequently. Stir in garam masala, cumin and turmeric; cook for an additional 30 seconds.

Stir in chickpeas, coconut milk, pumpkin, ½ cup water and 1 ½ teaspoons salt. Bring to a simmer and continue to simmer for 10 minutes, stirring occasionally, to let the flavors meld. (Add more water if it starts to look too thick.) Stir in cilantro and lime juice to taste. Taste and add more salt if necessary.

Serve over rice or couscous if you like, and top with more cilantro and lime wedges on the side. 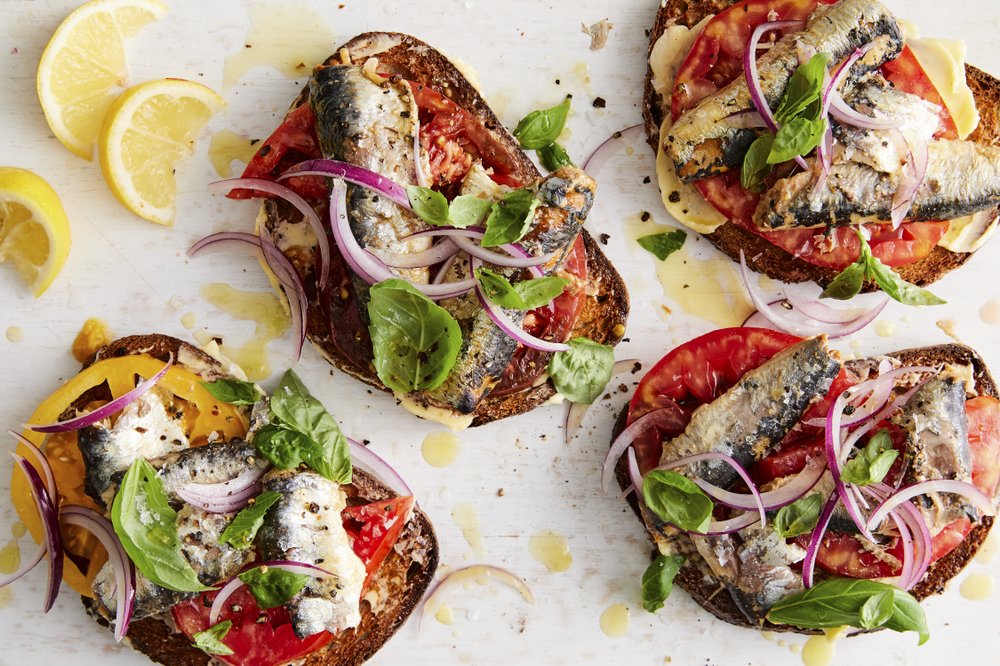 1 can sardines (6 to 7 ounces), deboned if desired

While the toast is still warm, immediately rub it (aggressively!) with the cut side of the garlic clove, then spread toast generously with butter. Top butter with tomato slices and lightly salt them. Top tomatoes with sardines and then onion slices. Drizzle with olive oil and lemon juice, then season with more salt and pepper. Garnish with basil if you like and serve immediately

Print Headline: CAN DO RECIPES: Canned food makes some dishes easier to cook and no less delicious