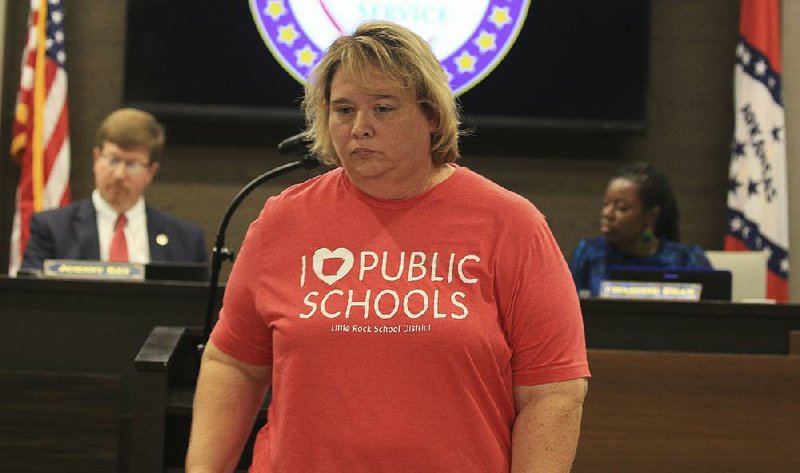 In this file photo Teresa Knapp Gordon, president of Little Rock Education Association, leaves the podium after speaking during a state Board of Education meeting. - Photo by Staton Breidenthal

The rift between Little Rock School District employees and the state agency that controls the district widened Monday as the employee union president publicly warned of a strike and state officials took new steps toward ending collective bargaining in the district.

At an open meeting at First United Methodist Church, Little Rock Education Association President Teresa Knapp Gordon asked the audience of about 150 teachers and parents to call on the state Board of Education and Gov. Asa Hutchinson to return the state-directed Little Rock district in its entirety to the full control of a locally elected school board. She also called for the preservation of employee-rights to be represented by the association, which has negotiated employee contracts since 1966.

Gordon said that employees -- whose current contract expires Oct. 31 -- don't want to walk out on students.

"That's the last thing we want to do," she said about what she called the "S word."

"But you can bet your bottom dollar that if that is what it takes to make sure our children are protected, then that's what we will do," she said, adding later: "Stealth is critical in this. We won't advertise until it happens. Be ready for anything."

The issue of the district's future management comes in advance of the January 2020 deadline for correction of achievement deficiencies that led to the state takeover of the district -- the removal of the elected School Board and the placement of the superintendent under state supervision -- in 2015.

The community forum happened on the same day that the state Education Board's Oct. 10 agenda was posted on the Division of Elementary and Secondary Education's website.

That six-page agenda includes near its end a report on school letter grades and categorization of schools pursuant to the framework adopted by the Education Board last month.

The framework calls for restoring an elected school board in the capital city in November 2020 but classifying schools that receive F letter grades from the state as Tier III schools. Tier III schools would operate under "different leadership" than other schools in the district but in partnership with the Little Rock district.

The state letter grades are based largely on results from the ACT Aspire exams but also other factors such as student attendance and high school graduation rates. Little Rock currently has eight F schools.

The Education Board agenda for next week includes consideration of a motion -- tabled from a Sept. 13 special meeting of the nine-member board -- directing State Education Secretary Johnny Key to discontinue recognizing the Little Rock union as the exclusive contract bargaining agent for the employees in favor of the formation of two personnel policy committees, one for teachers and one for support staff. Key acts in place of a school board in the state-controlled 23,000-student system.

Personnel policy committees have long been required by state law but, until earlier this year, the Little Rock district was excluded from the requirement because it engaged in collective bargaining with the association. After the law was changed this year, the association members and Superintendent Mike Poore proposed to Key the formation of policy committees that would serve in advisory roles to the collective bargaining process.

Teacher members and support staff members of the personnel policy committees are to be elected by their peers in the first quarter of a school year without involvement of district leaders. The Education Board agenda, however, includes recommendations from the state Division of Elementary and Secondary Education to waive those laws, clearing the way for an independent third party organization to oversee the elections.

In her address at the community meeting, Gordon praised Poore, the district's state-appointed superintendent for his collaborative efforts with educators and the larger community to improve the district. She said she believes the Education Board wants to remove Poore, who is in his fourth year as district executive.

Gordon criticized the state's approval of charter schools in Little Rock during the nearly five years it controlled the district, saying that the waivers of laws and rules that are granted to charters are waivers of state laws and rules that are intended to ensure the quality of public school programs and services for students. She said that eSTEM Public Charter School Inc. has 93 waivers of state rules, laws and standards, as evidenced by the list of waivers for the system's school on the state agency's website.

"What happens in Little Rock has repercussions for all school districts in the state," Gordon said.