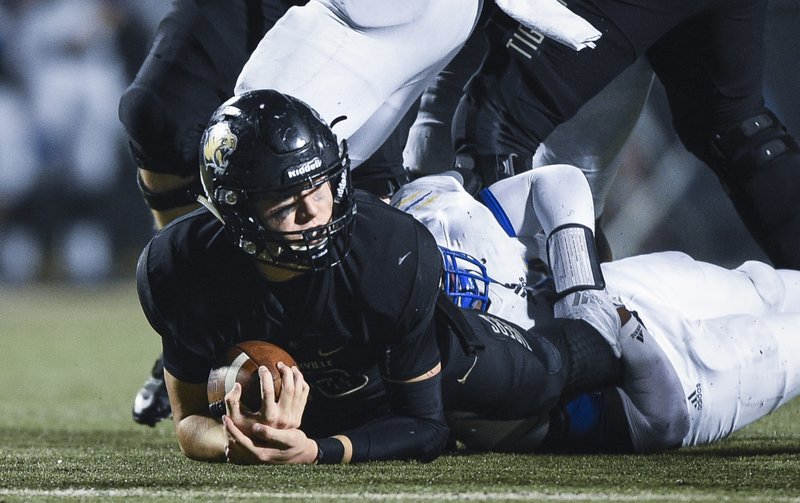 BENTONVILLE — There won’t be a championship showdown between undefeated teams next week in Arkansas’ largest classification.

North Little Rock spoiled that dream scenario with a 42-24 victory over Benton-ville on Friday in the Class 7A state semifinals at Tiger Stadium. The Charging Wildcats handed Bentonville its first loss of the season and advanced to play Bryant in the championship game.

Bryant remained undefeated with a 35-0 victory over Bentonville West. The wins by the 7A-Central schools set up a rematch between Bryant (12-0) and North Little Rock (8-4) after the Hornets beat the Charging Wildcats in the championship game last year at War Memorial Stadium.

Making the long trip to Bentonville isn’t a problem for North Little Rock, which opened the season with a 19-0 shutout over Tulsa (Okla.) Booker T. Washington at Tiger Stadium. But winning a semifinal game against a Bentonville team that was 11-0 was more satisfying for the Charging Wildcats, who controlled the game after scoring on their first possession.

“Everybody counted us out, even a lot of our fans,” senior offensive lineman Mason Carlan said. “But we’re built for this. We play for situations like this because we play for each other. We’re a brotherhood.”

The game was a disappointing end to a highly successful season for Benton-ville, which was eliminated last year after a bye by Fort Smith Northside. Bentonville went undefeated in conference play and whipped Little Rock Catholic last week before losing to North Little Rock.

Lightning twice delayed Friday’s game but the weather didn’t do much to slow North Little Rock. The Charging Wildcats’ running game mostly consisted of quick pitches to Brandon Thomas, who ran for 153 yards on 25 carries. Thomas, who was helped off the first to end the first half, returned in the second half and continued his assault while often overpowering Bentonville defenders. Thomas, who is verbally committed to Memphis, put North Little Rock ahead 35-14 in the fourth quarter with a 14-yard touchdown run along the North Little Rock sideline.

“(Thomas) is the toughest kid I’ve ever met,” Carlan said. “So, I was not shocked at all when he came back in the second half and played the way he did.”

Thomas, who rushed for over 1,000, yards despite missing about half the season, wasn’t the only play-maker for North Little Rock. Quarterback Kaream Cotton connected for big pass plays with Bralin Battles, who scored on a 28-yard reception in the first half and caught a 30-yards pass in the second half to set up another touchdown.

North Little Rock went ahead 14-10 in the second quarter when Battles out-jumped a Bentonville defender for a 28-yard touchdown pass. Cotton threw a fade pass near the North Little Rock sideline that Battles initially bobbled then corralled in the end zone to give the Charging Wildcats the lead.

“I was just trying to make a play for the team,” Battles said. “I want to get back (to Little Rock) and win a championship. That’s all I want.”

Cooper Smith caught a 49-yard touchdown pass from Ben Pankau to pull Benton-ville to within 21-17 late in the second quarter.

Thomas appeared hurt leaving the field at halftime, but he came back strong in the second half to lead North Little Rock into the state finals for a fourth consecutive year. The Charging Wildcats are the first to reach the Class 7A state championship four consecutive years since Bentonville went five consecutive times from 2010-2014 under Barry Lunney Sr.

Rick Fires can be reached at [email protected] or on Twitter @ NWARick.