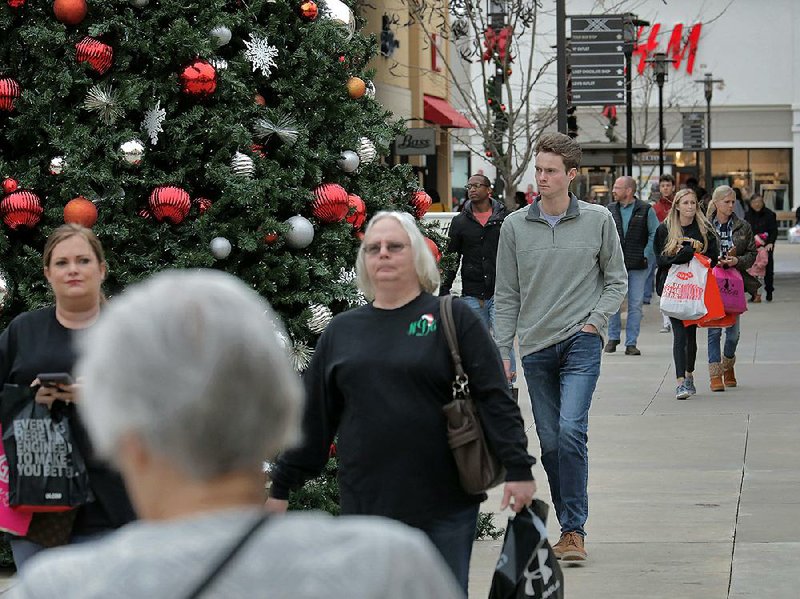 Customers pass a Christmas tree Friday at the Outlets of Little Rock. A National Retail Federation survey said U.S. retailers will ring up between $727.9 billion and $730.7 billion in Christmas sales in November and December. More photos are available at arkansasonline.com/1130sales - Photo by John Sykes Jr.

Black Friday shoppers fought for parking spots at malls and lined up early outside discount stores, kicking off a condensed shopping season that has intensified the scramble between Thanksgiving and Christmas.

According to a National Retail Federation survey, 114.6 million consumers planned to shop on Black Friday this year. Slightly more people, 47%, said they would start their shopping in stores compared with 41% of those who planned to start online.

The industry trade group estimates that retailers will ring up between $727.9 billion and $730.7 billion in Christmas sales over November and December, for an increase of about 4% over 2018.

[Video not showing up above? Click here to watch » https://www.youtube.com/watch?v=Lm1kxRLfUyM]

"Millions of customers joined us online and in stores across the country for our Black Friday event," Steve Bratspies, chief merchandising officer for Walmart's U.S. division, said in a news release that was posted online by 4:50 a.m. Friday. Walmart began offering "pre-Black Friday" deals on Nov. 15, and marked down more items in the week before Thanksgiving.

Last year, Walmart reported same-store sales up 4.2% in the fourth quarter compared with the previous year, for its best results in nine years. Walmart doesn't break out sales results for the Christmas shopping season. Instead, sales for the period will be reflected in its fourth-quarter earnings report in February.

For many retailers, this year's Black Friday sales began in October. In the weeks since, retailers have pushed out promotions aimed at getting consumers to spend early and often. A number of factors, including looming tariffs, winter storms and the shorter-than-usual shopping season, have kept retailers on edge during what is typically their most lucrative period of the year. Many are banking that the time-release rollouts of promotions and special offers will keep customers hooked.

Early discounts on popular gift items like apparel and electronics have become the norm for most retailers, a trend that industry experts say has made the traditional start of the Christmas shopping season less relevant. Still, shoppers nationwide hit the malls and e-commerce sites Friday morning in hopes of scoring big savings on this year's must-have toys, televisions and kitchen gadgets.

Black Friday, which some say began in the 1920s, actually was retailers' biggest shopping day for many years, said Mark Cohen, director of retail studies at Columbia University's Graduate School of Business. The Saturday before Christmas now holds that title, he said.

"This has been a really good start," said Rod Sides, vice chairman and leader of U.S. retail and distribution practice at Deloitte LLP. Black Friday isn't as important as it was in the past, Sides said, but it remains "the most critical barometer of spending."

The attention shifted to mall stores Friday, Sides said. Based on checks at Macy's, Dillard's and Belks, accessories like shoes and handbags drew the most attention.

Sides said there are no new must-haves this year, and many of the big items like Instant Pot, a leader in the slow cooker category, were highlighted in past Black Friday circulars. But he said a good shopping season doesn't depend on new items.

"We still have the same amount of money to spend regardless of whether the season is longer or shorter," he said.

Drew Simmons, 48, of Little Rock said she began shopping early Friday to score electronics at Best Buy, one of several retailers offering a combination of door-buster deals and online deals that lasted the entire week of Thanksgiving.

"There's no lines," Simmons said about the Chenal Parkway location. Inventories were full, and large discounted TVs littered the store floor. She said the store wasn't as crowded as she had expected.

Rachel Crawford, 41, of Alexander had a cart filled with electronics and accessories, in contrast to last year, when her work schedule kept her from visiting different stores.

"Last year I did online shopping," she said. "This is the first time I've gone out in years [for Black Friday]."

She carried with her a large TV, a couple of hoverboards and a computer at Best Buy. Earlier she tried to buy a discounted gun for a relative, but it was too late.

"Bass Pro sold them way before I went there," Crawford said a little after 8 a.m.

Shoppers were "cordial and considerate," she said. "I didn't see any fighting this morning, so that's good."

Tressa Angell, 44, of Kansas City, Mo., said she did not set an alarm for Friday and did not go shopping on Thanksgiving. After some coffee at Starbucks, she and her daughters shopped at Target at the Park Avenue Shopping Center for Christmas gifts and things for their vacation to the Bahamas. Her relatives live in Little Rock.

"The store's not crowded at all," Angell said. "That's either because everyone was shopping yesterday or they are shopping online."

"I don't think it's any busier than a typical Saturday," she said.

The retail federation, the nation's largest retail trade group, baked the shorter season into its forecast, but it says the real drivers will be the job market. It forecasts that holiday sales will rise between 3.8% and 4.2%, up from the disappointing 2.1% growth in the November and December 2018 period that came well short of the group's prediction.

The retail federation expects online and other non-store sales, which are included in the total, to increase between 11% and 14% for the holiday period.

Based on reports from his team, which was in stores and malls over the past 24 hours, discounters like Target and Wal-Mart drew big crowds for door busters Thursday.

Ashley Buchanan, chief merchant at Walmart's U.S. e-commerce division, said in a news release Friday that thousands of bargains and hundreds of exclusive products will be available on Walmart.com.

Buchanan said customers can find deals across the website, including in popular categories such as electronics, video games, toys, home goods, apparel and baby items.

According to a survey by the National Retail Federation and Prosper Insights & Analytics, 68.7 million consumers are expected to take advantage of online bargains on Cyber Monday. Last year, online shoppers spent a record $7.9 billion on Cyber Monday, according to market research firm Adobe Digital Insights.

Information for this article was contributed by Anne D'Innocenzio and Alexandra Olson of The Associated Press; by Serenah McKay and Nathan Owens of the Arkansas Democrat-Gazette; and by Abha Bhattarai of The Washington Post. 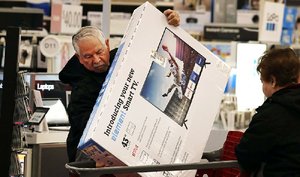 Photo by AP/LM OTERO
A shopper chooses a television at a Target store in Frisco, Texas, as Black Friday shopping kicked off with an estimated 114.6 million people expected to hit U.S. stores.