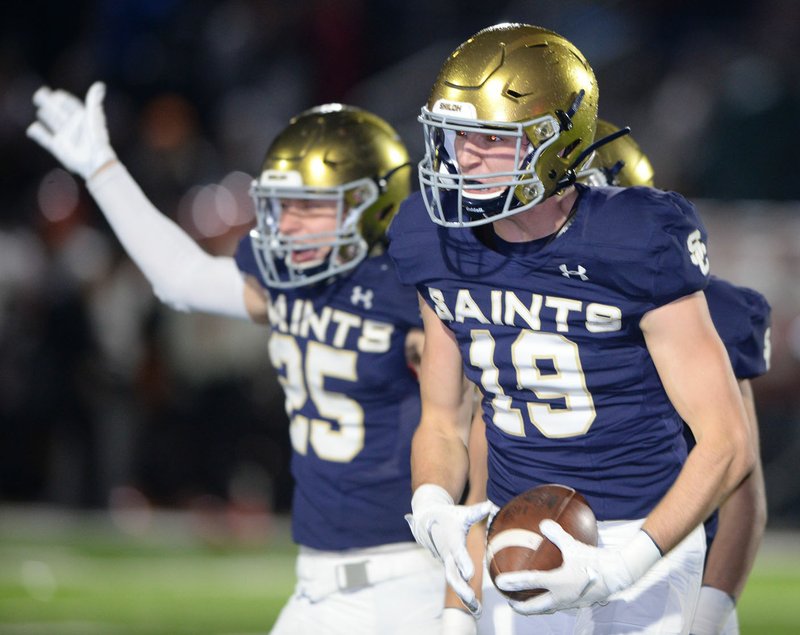 NWA Democrat-Gazette/ANDY SHUPE Shiloh Christian linebacker Drew Dudley (19) celebrates Friday, Nov. 29, 2019, after making an interception during the first half of play against Nashville at Champions Stadium in Springdale. Visit nwadg.com/photos to see more photographs from the game.

SPRINGDALE -- Shiloh Christian may be known for a wide-open passing game, but the Saints showed off a powerful running game to move into next week's Class 4A semifinals.

Junior Cam Wiedemann rushed for 201 yards on 30 carries and four touchdowns, including the clincher late, to lead Shiloh Christian to a 49-27 win over Nashville on Friday night in Champions Stadium.

Nashville (11-2) pulled within one score with 9 minutes, 17 seconds left in the fourth quarter, scoring after recovering an onside kick. Keshawn Stewart's 4-yard run pulled the Scrappers within 35-27 but the PAT missed wide to leave the deficit at eight points.

The Scrappers tried a sky kick this time but Shiloh Christian (13-0) recovered near midfield and Wiedemann carried the ball on five of the seven plays including the final 3 yards for the touchdown. Wiedemann's fourth touchdown run of the night pushed the Saints' lead back to 42-27 with 6:27 left.

The Shiloh Christian defense held Nashville on downs on its next possession and added a late touchdown to set the final margin.

"He had an unreal night. That's two weeks in a row that he's just been extremely effective and dominating. You don't do that without the offensive line. We played great up front, our fullback Logan Raben and even our receivers on the edge did the job blocking."

The Saints then went on a six-play, 60-yard drive culminated with a 20-yard touchdown run by Wiedemann for a 21-14 lead with 4 minutes, 7 seconds left in the first half.

Shiloh Christian's Drew Dudley then picked off a Ty Gordon pass at the Saints' 39. This scoring drive took only four plays traveling 61 yards. Logan Raben broke a 31-yard touchdown run to push the Shiloh Christian lead to 28-14 with two minutes left in the first half.

The Saints also recovered a Nashville fumble that Shiloh Christian turned into a 2-yard touchdown pass from Reece to Tollett for a 14-7 Shiloh Christian lead with less than a minute left in the first quarter.

• Nashville turned the ball over four times, which all led to points for Shiloh Christian.

• The Scrapper defense held the Saints on downs three different times inside the Nashville 5.

• The beginning of the second half was delayed by about an hour because of lightning.

• Shiloh Christian will now travel to Crossett, which knocked off defending state champion Arkadelphia, in next week's semifinals.