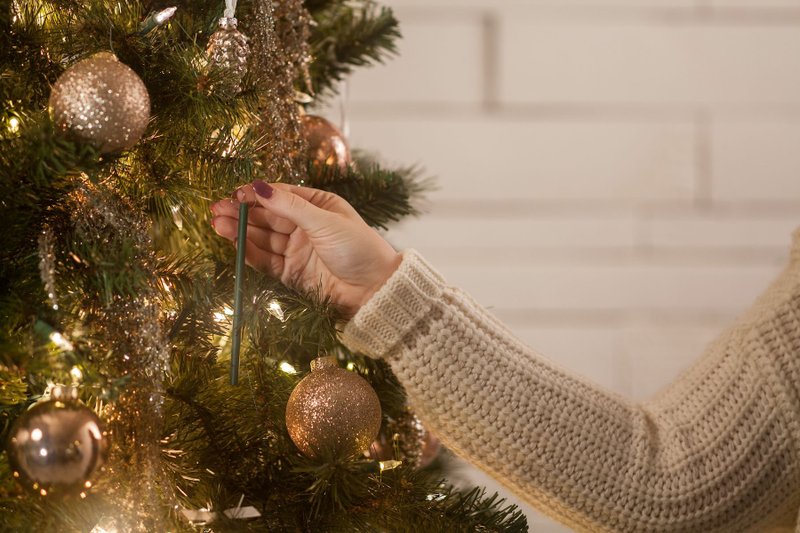 Courtesy of ScentSicles Is it real? These hanging sticks of seasonal fragrance can bring artificial Christmas trees to life with "real-tree" smells.

We go through the house opening doors to closed off rooms sniffing like police dogs. We are a short parade: my husband, myself and our pet sitter. We are conducting a highly scientific study. I have released eight holiday fragrances in isolated spaces, so they can't blend. We are to go in, wrap our noses around each aroma, and sniff out the winners and stinkers to find the perfect seasonal scent.

There is nothing I won't do for you.

I imagine this is what a French bordello smells like, though I wouldn't know, a row of rooms engulfing wafts of foreign perfumes. Only instead of perfume, my rooms capture aromas of pine cones, cinnamon, fir trees and gingerbread.

We sniff, and keep our opinions to ourselves. As I said, highly scientific.

Here is our analysis:

Candles. Many companies make wonderful, holiday-scented candles, but some are just awful, like migraines with a wick. Regardless, candles go with Christmas like reindeer go with sleighs. For the study, I used candles from Thymes. We test-smelled the company's best-selling Frasier Fir candle (will someone please tell these people the tree is spelled Fraser Fir), and the Gingerbread candle.

The pro-con: Holiday candles add a magical ambience, but you can't leave them unattended. I once had an entire faux-pine centerpiece go up in flames when the center candle burned too low.

And the jury said: Frasier fir beat out Gingerbread, but only slightly. Both smell fabulous. The clean green fragrance of the Frasier Fir means you can live with it longer; the gingerbread scent gets points for not smelling heavy.

Essential oils. Although 82% of Christmas trees in U.S. households are artificial, according to the American Christmas Tree Association, people still pine for that fresh-tree smell. Balsam Hill, a company better known for its high-end, artificial Christmas trees, answers that longing with a line of natural essential oils extracted from real trees in the Northeast.

You can diffuse the oils with reeds, other diffusers or through the company's Scents of the Season Fragrance Machine, which is what I did. About the size of a small coffee thermos, the machine runs on rechargeable batteries, or you can plug it in.

The pro-con: You won't get that warm candle glow, but you won't burn the house down either. The device lets you control the fragrance output from barely there to there go your eyebrows, as well as how long it runs. The small drawback is the price. The machine is $99, and a set of three, half-ounce bottles of essential oils costs $29. We test smelled Balsam Fir and Fraser Fir.

And the jury said: Both smell like the real deal and could definitely fake you into thinking a real tree is nearby. Beyond that, we frankly couldn't tell them apart. Balsam Fir might smell a little crisper, and Fraser Fir a bit woodsier, or not.

Scented sticks. ScentSicles came on the scene a decade ago to bring artificial Christmas trees to life with "real-tree" smells. The 5-inch, scent-saturated sticks, about the width of a drinking straw, can hang on your artificial tree, or you can stick them in a garland, or tuck them anywhere you want slow-release holiday fragrance.

I tried this product eight years ago, and thought the sticks smelled a bit like Pine-Sol. The smell disappeared in just a few days, which was a mixed blessing. However, the company has refined its formulas, so the product's crafted scents smell better and last longer, up to four weeks, said the company representative. And she's right.

We test-sniffed four fragrances. I put sticks of O Christmas Tree in the powder room, White Winter Fir in the walk-in closet, Spiced Pine Cones in the pantry, and Pear in a Pine Tree, new this year, in the master bath.

The pro-con: ScentSicles, which come in tubes of six and sell for $7.99 at major retailers like Target, Walmart and Home Depot, are a low-tech, fire-safe option that do the job. Though their fragrance fades, at that low price, you just get more.

And the jury said: All delightful. Not a sinker in the bunch. But O Christmas Tree, a blend of fresh evergreen and citrus, was everyone's top pick. Spiced Pine Cones, with its cinnamon undertones, was the unanimous second. Tied for third were White Winter Fir (the company's top smeller), which leans minty, and Pear in a Pine Tree, which, though pleasant, smells more fruity than holiday-ish.

Regardless of how you serve up your scent this season, here are some fragrance basics.

Nothing beats the real thing. Pie in the oven, cider on the stove, a freshly cut fir brought home to decorate, these scents set the bar. But when you don't have time to bake a pie or chop a tree, a little store-bought scent is a great substitute.

Save the mix and mingle for the holiday party. If your home is small, pick one scent you love and use it throughout. If you have the room, go ahead and featuring distinct fragrances in separate spaces, but don't layer them.

Exercise scent control. Like a woman who can't smell her own perfume, after being around the same fragrance a while, we become "nose blind." If you're unsure how strong the fragrance is, ask someone who doesn't live in your home, then dial the aroma up or down.

Honor scent-free zones. Kitchens and eating areas should feature the no-scent scent, so food aromas aren't spoiled. Always use unscented candles on dining tables. Beyond that, just follow your nose.

Syndicated columnist Marni Jameson is the author of five home and lifestyle books, including Downsizing the Family Home -- What to Save, What to Let Go