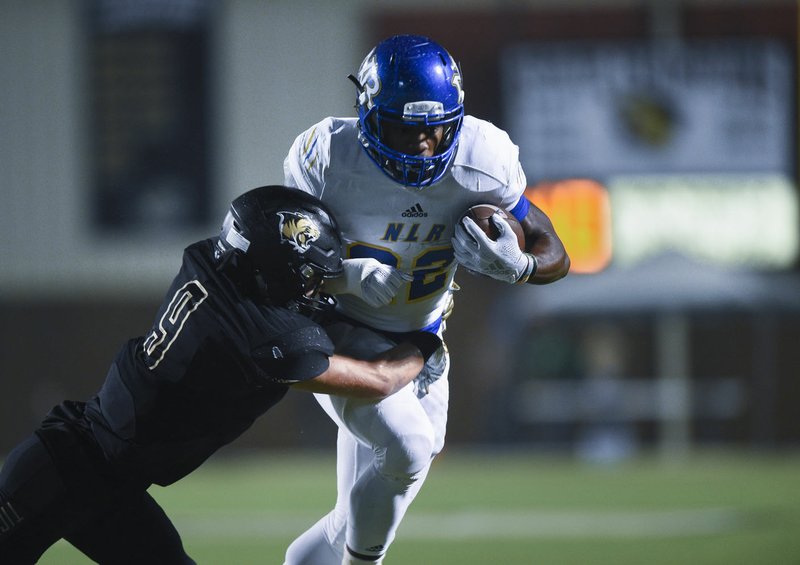 The North Little Rock senior who has verbally committed to the University of Memphis looked questionable for the second half against Bentonville in the Class 7A semifinals Friday night.

Thomas has faced a season full of injuries, starting with a hand injury in the summer and various leg injuries that limited his playing time. But not this time. After a 37-minute halftime that included a lightning delay, it was Thomas who supplied the charge for the Charging Wildcats, leading a second-half explosion as North Little Rock routed Bentonville 42-24 to advance to the Class 7A state championship game for the fourth straight season.

"I was going to do everything I could to come back after halftime," a beaming Thomas said after the game. "I couldn't let my team down. It was bad at the moment, but it was something I had to overcome. I overcame it for my team."

Thomas, who can barely move his right thumb after a summer accident and plans to have at least one surgery to repair nerve damage, rushed for 153 yards on 25 carries and scored two rushing and one receiving touchdowns on the night. He was at his best in the second half, leading the Charging Wildcats (8-4) on a momentum-changing touchdown drive on North Little Rock's opening possession of the second half. Thomas carried the ball on six plays in the drive including four straight before teammate Aaron Sims crashed in from the 2 to extend North Little Rock's lead to 28-17 with 5 minutes, 13 seconds left in the third quarter.

"I thought that was huge," North Little Rock coach Jamie Mitchell said of the third-quarter drive. "With the weather tonight, we kind of played that. I typically would have deferred to start the game, but I thought rain would be here in the second half, so I wanted to steal a possession. Obviously it didn't rain and I would have loved to have had the ball to start the second half, but our defense played great all night."

North Little Rock was able to contain Bentonville's offense for the most part, especially the Tigers' passing attack. Bentonville senior quarterback Ben Pankau was just 13-of-32 passing for 203 yards, and also had several passes dropped.

North Little Rock started the game sluggish and still managed to get into the end zone on an 80-yard opening drive. The Charging Wildcats were penalized three times on the drive, but quarterback Kareame Cotton hit several key passes including an 25-yard strike to Brendan Bailey on fourth and 13 to keep the drive alive. Cotton hit Thomas out of the backfield on an 11-yard scoring strike for the early lead.

Bentonville (11-1) answered on its first drive. Preston Crawford got the drive started with runs of 16 and 17 yards and Pankau hit Cooper Smith for 19 yards, setting up Crawford's tying touchdown with 4:35 left in the first quarter.

The Tigers later took their first and only lead by driving from near midfield to the North Little Rock 6. But a huge 14-yard sack of Pankau by Timothy Spaight moved the ball all the way back to the Tigers' 20 and Bentonville had to settle for a 38-yard Logan Turner field goal and a 10-7 lead. Bentonville never led again.

North Little Rock hit back-to-back touchdowns to take a 21-10 lead. Cotton hit Brailin Battles on a 28-yard scoring strike. Battles high-pointed the ball over Bentonville defensive back Levi Bennett and raced into the end zone, then the Charging Wildcats scored again when Thomas ripped off a 27-yard run that set up Cotton's 2-yard keeper.

After a defensive stop, Bentonville struck quickly. Pankau hit Crawford on a shovel pass for 11 yards, then found Smith down the right sideline for 49 yards to pull the Tigers within 21-17 with 1:08 before halftime.

Thomas was injured on North Little Rock's next possession after a 4-yard gain, but as the second half proved, he was far from out.

"We just didn't play very well, but credit North Little Rock with that," Bentonville coach Jody Grant said. "This was very uncharacteristic of how we've played all year. We dropped a lot of balls, didn't tackle great, didn't create turnovers. This was not Bentonville football tonight. Give North Little Rock credit. They came ready to play and played a very good football game."

• The start of the game was delayed 12 minutes after thunderstorms passed through Northwest Arkansas around 6:30 p.m.

• Cotton finished the night 11-of-16 passing for 174 yards and two touchdowns without an interception.

• North Little Rock will meet Bryant for the Class 7A state championship on Friday in War Memorial Stadium.