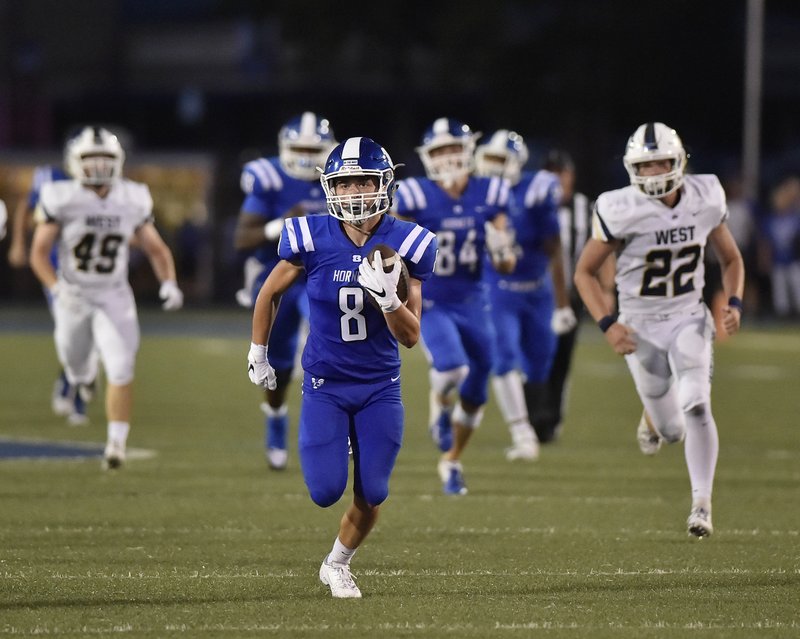 In this file photo, Bryant receiver Jake Meaders (8) runs away from the Bentonville West free safety Maddox Thornton (22) for a touchdown during Friday night's game at Hornet stadium in Bryant.

Bryant advanced to its second consecutive Class 7A title game Friday with a 35-0 victory over Bentonville West at Hornet Stadium.

Bryant will play North Little Rock, a 42-24 winner over Bentonville, at War Memorial Stadium in Little Rock next Friday. Kickoff is scheduled for 7 p.m.

"We have to get better," Bryant Coach Buck James said. "We left at least 21 points out there that we should've had by halftime. We didn't execute very well, and that part we've got to fix."

Bryant scored on the opening possession of the second half to take a 28-0 lead when senior running back Ahmad Adams scored on a 2-yard run, a score set up by a 37-yard pass from junior quarterback Austin Ledbetter to senior receiver Jake Meadors on third and 12 from the Bryant 43.

A 3-yard touchdown run by junior running back Tanner Anderson completed the scoring with 11:27 left in the fourth quarter.

A 9-yard touchdown pass from Ledbetter to Schrader gave Bryant a 14-0 lead on its second possession, but the Hornets would not score again until late in the second quarter when Anderson's 21-yard run gave Bryant a 21-0 lead.

"When you play defense like we played, you can take some chances and get away with some things you don't normally do," James said. "But all in all, we beat a really good football team."

Bentonville West (7-5) did not have a possession in Bryant territory until late in the second quarter. That 43-yard drive was stopped by junior defensive back Austin Schroeder's interception of a pass from Bentonville West junior quarterback Dalton McDonald.

Bryant had 333 yards of offense, led by Ledbetter's 114 passing yards and Adams, who rushed for 106 yards on 18 carries. Bentonville West was held to 143 yards and had four turnovers.

Bryant earned a bye through the first round of the playoffs and advanced through the quarterfinals with a 42-14 victory over Fayetteville on Nov. 22.

Bentonville West also received a first-round bye and won its semifinal appearance with a 31-21 quarterfinal victory at Conway.

"[Bentonville West] has played good defense all year," James said. "I mean, they're in the semifinals. I would say they've done good at a lot of things."