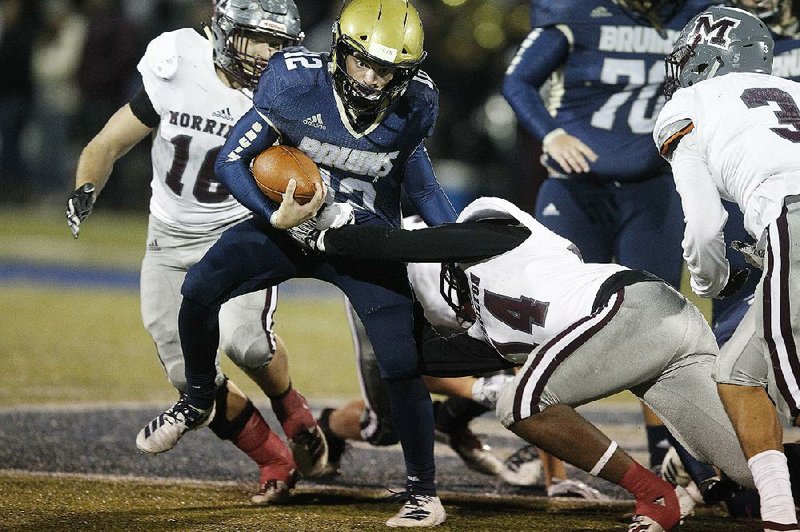 Pulaski Academy is back in a familiar place -- the Class 5A state championship game.

The Bruins advanced to their sixth consecutive title game with a 68-41 victory over Morrilton in the Class 5A semifinals Friday night at Joe B. Hatcher Stadium in Little Rock.

"It feels good to be back," Pulaski Academy Coach Kevin Kelley, "but we're not celebrating. Our goal is to win the thing. We know we got our work cut out for us. Little Rock Christian has got us the last two times [in last year's title game and a 63-61 regular-season matchup Oct. 4]. They're a great ballclub.

"But I'm glad we got one more shot at them to be honest with you."

Senior quarterback Braden Bratcher passed for 515 yards with 4 touchdowns and one interception for Pulaski Academy (11-2). He also rushed for a touchdown.

Pulaski Academy led 32-13 at halftime thanks to three touchdown passes from Bratcher.

"I thought we did a lot of good things," said Kelley, whose team never trailed. "We made some big plays when we needed them."

Morrilton cut the lead to 18-7 with 4:04 left in the first quarter on senior quarterback Jacolby Criswell's 19-yard touchdown run.

Pulaski Academy extended the lead to 26-7 with 1:17 left in the first quarter when Himon scored from 18 yards. Criswell's 8-yard touchdown run pulled the Devil Dogs within 26-13 with 8:28 left in the second quarter.

Bratcher threw his third touchdown pass of the first half -- this one for 27 yards to senior wide receiver Andrew Cobb -- to give the Bruins a 32-13 lead with 7:21 left before halftime.

Criswell's 7-yard touchdown run pulled Morrilton within 52-34 early in the fourth quarter, but that was as close as the Devil Dogs would get. Senior Merritt Jones scored from 1 yard out for a 59-34 lead with 9:30 remaining.

Morrilton, the 5A-West Conference's No. 4 seed that won road games at Valley View and Texarkana to reach Friday's semifinal game, was led by Criswell. The North Carolina oral commitment accounted for 360 yards offensively (242 passing, 118 rushing) and 5 touchdowns, all rushing.

But the Devil Dogs (8-5) couldn't overcome their early deficit.

"You know that against PA there's going to be a lot of momentum swings," Morrilton Coach Cody McNabb said. "You'd like to get off to a better start. But they do a great job. We didn't play well enough defensively. We didn't get enough stops.

"They made the plays they needed. That's a really good football team. You have to play your best football game in order to give yourself a chance to win. I didn't feel like we did that." 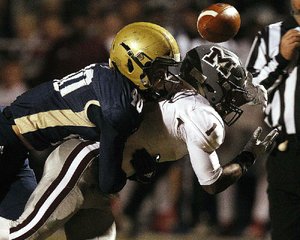 Print Headline: PA makes it six in a row by outlasting Morrilton