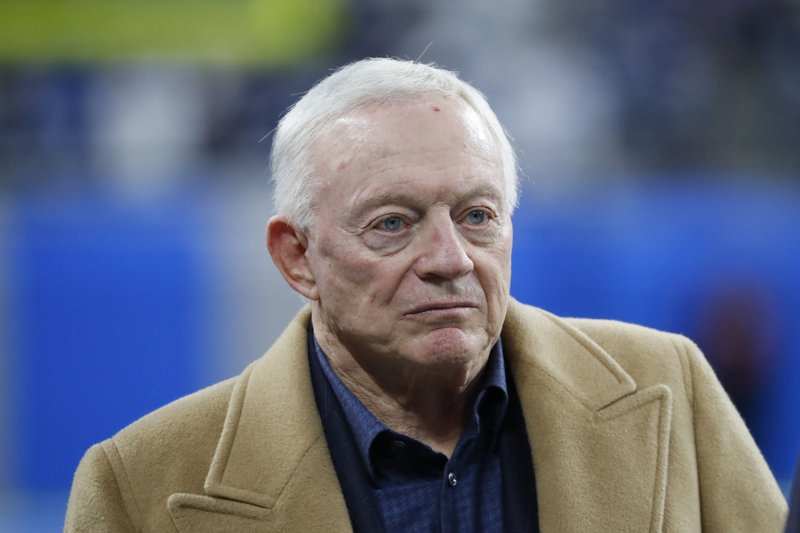 Dallas Cowboys team owner Jerry Jones is seen during pregame of an NFL football game against the Detroit Lions, Sunday, Nov. 17, 2019, in Detroit.

ARLINGTON, Texas -- No wonder the Dallas Cowboys are schizophrenic.

Owner Jerry Jones has gone from the Big Bad Wolf to Mister Rogers.

Less than a week ago, Jones went scorched earth on the coaching staff after a frustrating and disappointing loss to the New England Patriots in a game in which he had hoped they would finally live up to their potential.

The Cowboys responded by going 10 toes up in an embarrassingly one-sided 26-15 loss to the Buffalo Bills on Thanksgiving before an agitated home crowd at AT&T Stadium.

Instead of keeping with the anger of a few days earlier, Jones turned into Mary Poppins and full Pentecostal preacher at the same time while claiming to be Coach Jason Garrett's biggest supporter.

Now Jones believes the Cowboys can win their final four games, make the playoffs and make a Super Bowl run with Garrett -- who is in the last year of his contract -- ultimately saving his job.

Jones admits it all.

"Well, I'm saying here I know Jason very well," Jones said. "I've had a wonderful opportunity to spend a football life with him. So I know him very well. You know, without a doubt, you've seen it, nobody wants Jason to go. I'm going to tell you right now, he's got my back, too. He does have my back. I know that, too. This is disappointing.

"(But) this is not the time for me ... I'm looking ahead at another ballgame. I'm looking ahead at winning four or five straight. Five straight and helping write a story they will talk about, how it looks like you're down and out. And I mean that. That's the way that I'm operating. Every decision that I make over the next month will be with an eye in mind to get us in the Super Bowl now. I would normally say, 'You're really smoking something.' I normally would say that, but I know the room. I see the room, and I'm the one that OK'd and put the coaches in that room in there. I believe in this group."

Confidence is usually based on demonstrated ability. Jones acknowledges his confidence in a Cowboys turnaround is based on a pipe dream rather than anything of substance.

The Cowboys are now 0-5 against teams with winning records. They have lost six of their past nine games since a 3-0 start.

While the Cowboys remain in first place, their final four games are at the Chicago Bears (6-6), the Los Angeles Rams (6-5), the Philadelphia Eagles (5-6) and the Washington Redskins (2-9).

"I don't know that I would inject confidence anywhere in this thing relative to just the hanging on the mathematical chance," Jones said. "The way I'm going to handle this is encourage everybody to basically look to the possibility of winning out and end up doing something that people will write about 30 years from now, and being a part of that. I like that story as I eat my turkey better than having to choke with it going down."

"Well, it's just that," Jones said. "But it was a fairy tale when I got to buy the Dallas Cowboys. It's been a fairy-tale life to me, so I have always dreamed out there on the edge. I really have. I've been confused many times between my dreams and reality."

Jones is not the only one counting on a dream of a turnaround and doing something the Cowboys haven't done all season.

Quarterback Dak Prescott voiced the same optimism based on the team controlling its own destiny, rather what they have shown on the field.

Asked why hasn't it happened yet, considering the Cowboys have said the same things and expressed the same confidence after every loss, Prescott said with conviction: "It will happen."

"It's the character of the room in there," Prescott said. "We have to flip our mindset, that mentality, to be our best every single rep, every single thing that we do. It's going to to pay off going forward."

It hasn't paid off yet. And time is running out, if it hasn't already.