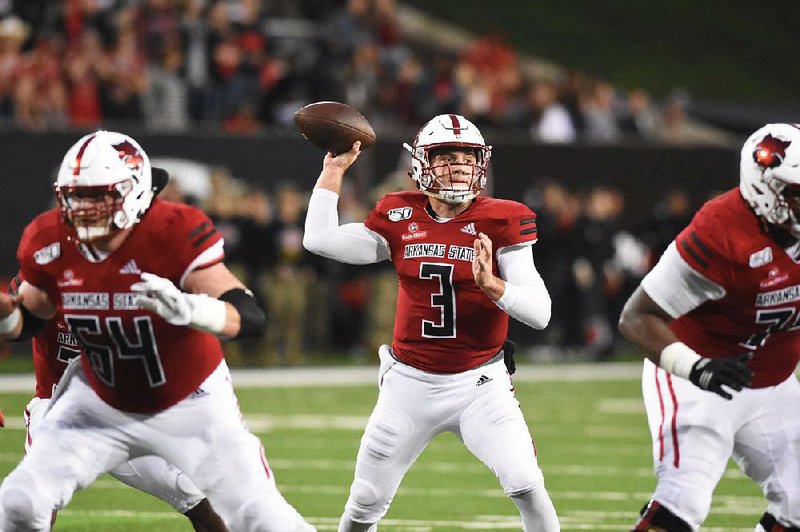 Layne Hatcher, seen here in a game earlier this season, completed 23 of 38 passes for 342 yards and 2 touchdowns in Arkansas State’s 34-30 loss to South Alabama on Friday in Mobile, Ala. - Photo by Staci Vandagriff

Arkansas State University Coach Blake Anderson warned Monday that South Alabama would be all that the Red Wolves could handle in the teams' regular-season finale in Mobile, Ala.

ASU (7-5, 5-3), which entered as an 11-point favorite, saw its four-game win streak snapped and now will wait for a bowl assignment when they are announced Dec. 8.

All South Alabama needed was a stop, and it didn't have to wait long for it.

From there, South Alabama, under second-year Coach Steve Campbell, picked up one first down and ran out the remaining 1:01.Campbell previously coached at the University of Central Arkansas.

"It took us a little while to respond when this game got going," Anderson said in a news release. "We were frustrated on both sides early and struggled to get stops and they made some big throws. Fortunately, the guys battled back and made a game of it, but it's tough to play here. We talked all week about how we were going to get their best game and that's what we got. We came close, but we have to make plays when it matters.

South Alabama came in averaging a league-worst 17 points per game and 315.3 yards of offense per game but put up 34 points and 495 yards on the Red Wolves.

Despite struggling in the first half, ASU finished with 437 yards -- 304 of which came over the final two quarters -- although its running game was largely ineffective. The Red Wolves finished with 95 rushing yards, averaging 2.4 yards per attempt.

Hatcher completed 23 of 38 passes for 342 yards and 2 touchdowns, one to junior receiver Brandon Bowling and the other to senior receiver Omar Bayless, who finished with four catches for 98 yards. Senior receiver Kirk Merritt had nine receptions for 121 yards.

South Alabama took a 14-7 lead into halftime thanks to consecutive touchdown passes from Trotter to Tolbert that closed the first quarter.

South Alabama appeared ready to go up by two touchdowns midway through the second quarter, before ASU freshman cornerback Jarius Reimonenq stripped running back Carlos Davis and recovered the ball at the Red Wolves' 2.

On the Jaguars' next series, senior safety BJ Edmonds picked off Trotter near midfield in South Alabama territory. But the Red Wolves didn't capitalize with the good field position, turning it over on downs with an incomplete pass on fourth and 5.

On the ensuing drive, Trotter and Tolbert had thought they had connected on their third touchdown pass of the first half -- this one from 38 yards -- but it was called back due to an ineligible player downfield and further worsened by two unsportsmanlike conduct fouls.

ASU's offense started to click in the second half, scoring on its first five possessions.

Bayless hauled in a 10-yard touchdown pass with one hand and a defender all over him in the back corner of the end zone on third and 8 with 2:41 left in the third quarter, pulling the Red Wolves within 20-17.

After South Alabama moved the lead back to 10 on the opening play of the fourth quarter, thanks to a 31-yard touchdown pass from Trotter to Tolbert on a fourth and 3, the Red Wolves, trailing 27-17 with 14:53 to play, rallied again.

Hatcher rushed for a 1-yard score on a play-action bootleg, but the Red Wolves had to settle for field goals from 40 and 20 yards on their next two drives. ASU had a 30-27 lead -- its first since the opening quarter -- with 3:51 remaining, before South Alabama rallied late to play spoiler.