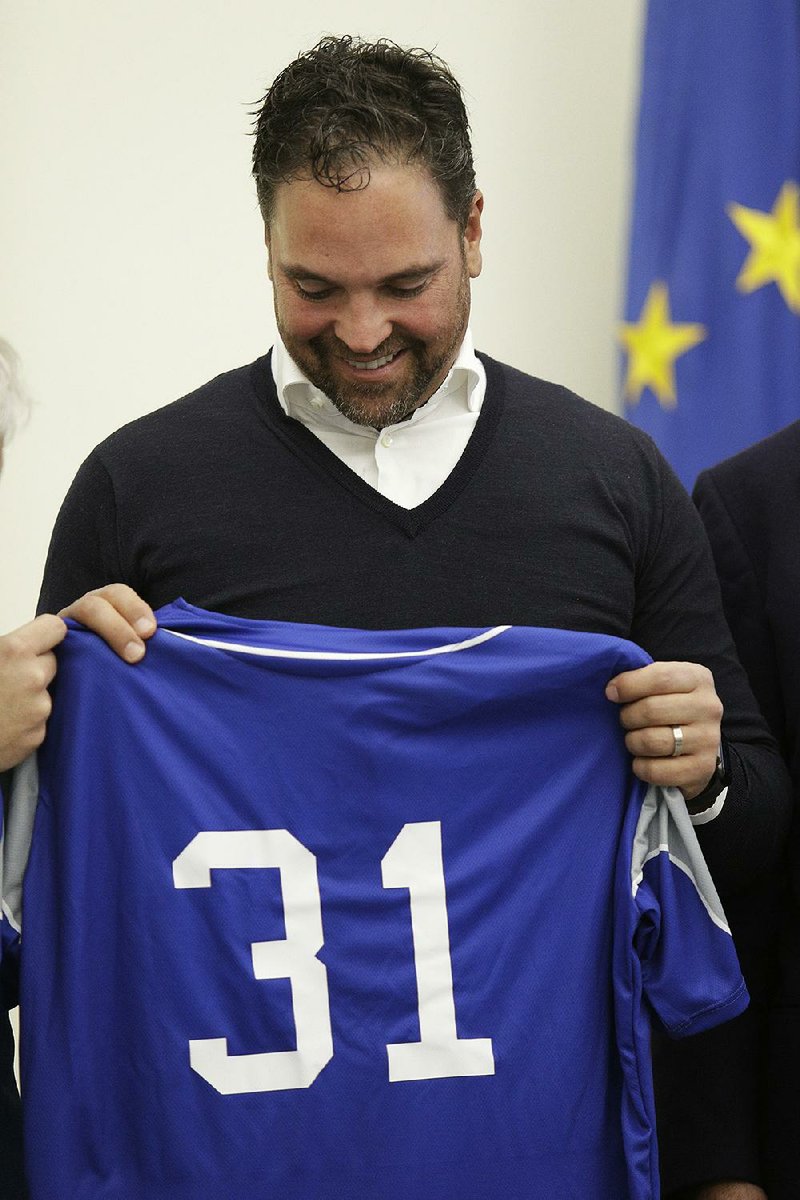 Mike Piazza shows his jersey after being named the manager of the Italy national team. Piazza credits former manager Tommy Lasorda with having a big impact on his career.

ROME -- When Mike Piazza was hired to manage Italy's national baseball team, one of the first people he shared the news with was Tommy Lasorda.

Now 92, the former Los Angeles Dodgers manager had persuaded Piazza to switch from first base to catcher at the start of what would be a Hall of Fame career.

"His style may be a little dated for lack of a better term, but he was very inspiring and the way he ran the team was he inspired you to achieve more than you thought you were capable of achieving," Piazza said of his mentor, a fellow Italian-American. "So that's the one thing I want to bring in."

The 51-year-old Piazza, who was born in Norristown, Pa., holds dual American and Italian citizenship. While the contract for Piazza's first managing job expires at the end of next year, Piazza is expected to remain with Italy at least through the 2021 World Baseball Classic.

He replaces Gilberto Gerali, who resigned when Italy failed to qualify for next year's Tokyo Olympics.

"It's a very important day for our federation," Italian baseball federation president Andrea Marcon said Friday at Piazza's presentation. "We're welcoming Mike back into our family. He's got a lot of responsibility. Our movement needs to bounce back after the Olympic tournament."

Piazza, speaking at the Italian Olympic Committee's headquarters, acknowledged "we have a lot of work to do."

"We need to re-establish our place as one of the elite programs in Europe," Piazza added, alternating between Italian and English.

"I'm not going to show up just to look good in the uniform and eat well and drink some coffee. I'm here to play and to have the team prepared to play and to manage the team in the style that I played -- be aggressive, take chances and do the little things right."

Piazza's one demand before taking the job was to have control over Italy's entire system, from the youth teams on up.

"I want everyone to be on the same program. I don't want a lot of scattered philosophies," he said. "I want a single philosophy that will permeate throughout the Italian baseball program.

"I'm looking forward to working with the kids and hopefully growing the game. Because that's ultimately our goal. We want to win but we also want to get more players to the major leagues," Piazza said.

The core players of Italy's team are infielders Alessandro Vaglio and Alex Liddi along with pitcher Alessandro Maestri.

Then there's a bunch of Italian-Americans who have played for the team in the WBC, such as Anthony Rizzo, Brandon Nimmo, Drew Butera and Chris Colabello.

"I'm not necessarily looking for the superstar -- I know those guys are probably going to be preparing for the season -- but that guy who maybe is ready to break out and really be in a situation where he's going to get a serious platform to display his skills and hopefully propel himself into a better situation," Piazza said.

Former teammates and opponents have also been calling Piazza asking for coaching gigs.

Piazza has lived in Italy for several years, having settled in Parma after buying third-division soccer club Reggiana in 2016. Reggiana dropped out of Serie C after the 2017-18 season and was declared bankrupt.

"Obviously I tried other things, and as much as it was not successful, it did get me to Italy full time and I learned a lot," Piazza said. "It was challenging and definitely ambitious and frustrating but one thing I've never been afraid of is a challenge."