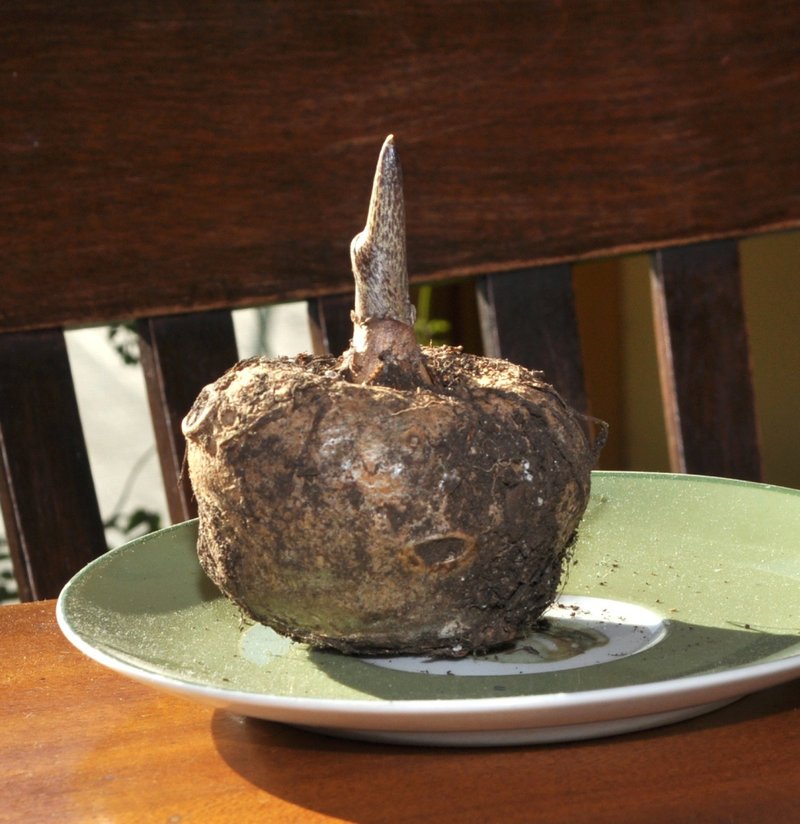 AP/LEE REICH The ability of the amorphophallus bulb to sprout even out of soil is only one eerie characteristic of this winter-time plant.

If you're missing Halloween, there are some eerie indoor and outdoor plants that carry the spooky season into winter and beyond.

Let's start with bat plant (Tacca integrifolia), which blooms year-round. The blossoms are neither bright, cheery nor attractive, except in a curiously ominous way. Atop 2-foot-high stalks, the flowers hover with foot-long, thin, dark "whiskers" drooping from the dusky, maroon-black "wings."

Growing bat plants isn't easy. Seeds germinate best if fresh and soaked first in warm water for 24 hours, but even then might take up to nine months to get started. Good air circulation and careful watering are needed to avert the constant threat of damping-off disease. The mature plants demand a well-drained soil (so add extra perlite) and annual repotting. This native of southeast Asia also must have high humidity and, like vampires, shies away from bright light.

ALSO EERIE, BUT EASY TO GROW

Much easier to grow is a plant called voodoo lily (Amorphophallus riviera). The only thing this tropical bulb needs is to be set in a bowl or anything else that keeps it from rolling away. Then, stand back. In a few weeks, without either water or soil, a flowering shoot starts to poke out from the softball-size tuber. It grows fast, elongating noticeably every day.

When voodoo lily's flowering shoot reaches 3 or 4 feet in height, an inverted purple skirt begins to unfold near its head. As the skirt unfolds, the central shoot, consisting of many small flowers, quickly elongates, generating measurable heat in the process.

At this point, you really will want to stand back, because the flower smells like rotting meat. That's useful for attracting the carrion insects that pollinate the plant in the wild, but is horrendous indoors. I grew this plant years ago, and when it reached that full flowering, stinky phase, I tied a plastic bag over its head and whisked it to the basement.

Come spring, you can retrieve the voodoo lily from the basement or wherever it's waiting out its stinky phase, cut off the flower stalk, and plant it outdoors in warm soil. Soon, a whole different type of shoot emerges, one that is leafy but just as eerie, in its own way, as the flowering shoot was. This leafy shoot is smooth and pale green with dark brown mottling, reminiscent of snakeskin. It grows a couple of feet high and then is capped by a single leaf that divides and spreads out like three radii of a circle, with each of the three sections further dividing.

At about the time that voodoo lily's leaf stalk is emerging, some strappy, green leaves are emerging elsewhere outdoors. There's nothing particularly eerie about these leaves, and by summer they die back to the ground. Those unobtrusive, green leaves were feeding a hardy perennial bulb, and when late summer rolls around, clumps of 2-foot-high, leafless flower stalks, each capped by a pale, purplish violet trumpet-shaped flower, emerge seemingly out of nowhere. The plant is magic lily (Lycoris spp.), and it is especially eerie in regions -- west of San Francisco, for example -- where the landscape is otherwise totally dry and tawny in late summer.