Cannabis as a sacrament raises some questions, concerns 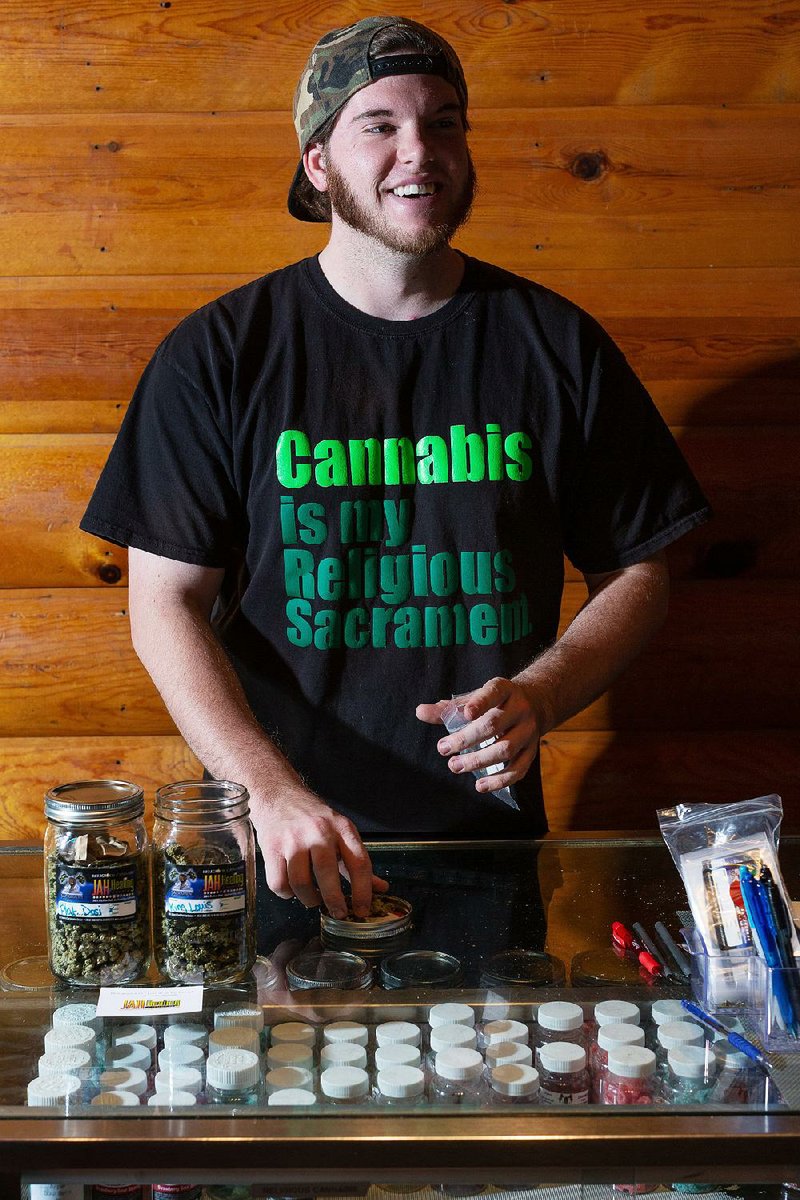 Shane Hollis stands ready at Jah Healing Church to provide churchgoers the cannabis sacrament of their choice. In return, they are asked for a donation.

LOS ANGELES -- Every Sunday, about two dozen people gather at a green cabin along the main drag of Big Bear, Calif., a small mountain town known for its namesake lake. They go there for Jah Healing Church services, where joints are passed around.

April Mancini, a founder of the church, said she was drawn to the idea of cannabis as a religious sacrament back in 2013 after she met a Rastafarian who was running the place as an unlicensed medicinal dispensary.

"I'm a Christian, so I wasn't sure in the beginning," Mancini said. "I didn't want to go against God."

But she said she studied the Bible for references to cannabis and believed she found them in scriptures that mentioned kaneh bosem oil. (English-language Bibles usually render the term "kaneh bosem," a component of an anointing oil mentioned in Exodus, as "fragrant cane" or "sweet calamus.")

In October 2017, Mancini filed paperwork with the state to incorporate the Jah Healing Kemetic Temple of the Divine. The newly registered church stopped requiring medical cards for marijuana for people 21 and over. Its teachings are largely Christian but borrow from a grab bag of religious traditions as varied as Rastafarianism, Buddhism and Judaism.

But before the year was up, the county sent the church a notice, accusing it of operating a dispensary. In April 2018, the county raided the church, confiscating the congregation's sacrament in all its forms.

The resulting and continuing legal battle led Jah to increase its efforts to establish itself as a church in the eyes of the law. Frances Valerie Rodriguez, who was ordained online through the Universal Life Church, was brought on as minister.

The church has begun a food pantry, started clothing drives and started its Sunday services (plus Bible studies every Wednesday).

At the heart of this matter is a question: What is religion? And how do you prove faith?

At many cannabis churches, which are scattered across the state, people do not technically pay for marijuana. But they do tithe, or donate money, in exchange for it. And many cannabis churches show up on Weedmaps and other dispensary listing sites, often with prices attached to their offerings.

Some, like Agora Temple in Los Angeles, offer a paid membership that allows people to smoke for free in a designated common area. (Members donate to the church to take marijuana home.)

Jah Healing Church, which stocks edibles, tinctures, pre-rolls and loose marijuana, has recently changed its funding method from mandatory donations, handed to a minister, to voluntary donations placed in an envelope and dropped into a box.

Cities, law enforcement and the hundreds of licensed and regulated marijuana dispensaries tend to view this as part of the black market.

In California, legal sellers face long and expensive licensing processes, quality control standards and high taxes. But 80% of California municipalities do not allow dispensaries, said Robert Solomon, a law professor at the University of California at Irvine and chairman of the Center for the Study of Cannabis there.

This means that illegal weed sales proliferate. A recent audit by a cannabis trade organization found approximately 2,835 unlicensed dispensaries, versus 873 licensed sellers in the state.

"It's one thing to say, 'Why would I buy black market milk from a guy I don't know when I could get good healthy milk from the supermarket?'" Solomon said. But if there's no supermarket around, he said, the "black market looks pretty good."

Near the center of the legal battle between cannabis churches and law enforcement in California is Matthew Pappas, a lawyer who has made a name for himself fighting to protect marijuana distribution.

In 2010, Pappas represented a group of disabled patients who said closures of medical marijuana collectives in Costa Mesa and Lake Forest violated the Americans with Disabilities Act. Both a federal district court and the 9th U.S. Circuit Court of Appeals ruled against them.

In 2015, Pappas represented a medical marijuana dispensary in Santa Ana that was raided by the police, during which officers destroyed surveillance systems. Pappas argued that video footage showed them eating marijuana edibles during the raid. The city eventually settled with the dispensary for $100,000.

The Oklevueha church is not tied to a federally recognized tribe and is at odds with American Indian religious leaders, including the National Council of Native American Churches, which rejects the idea that cannabis is an American Indian sacrament. (The 9th Circuit rejected Oklevueha's request for a religious exemption for cannabis use in 2016.)

Now, Pappas is taking on the cause of cannabis churches, representing them in numerous cases across the state. His task is to prove that his clients' beliefs are sincere and religious in nature and that those beliefs are being burdened by the law in a discriminatory manner.

In addition to serving as legal counsel, Pappas holds the title of Steward of the Word for all churches that are members of the umbrella organization.

Defining what counts as a religion under the law "has been a notoriously difficult question for the courts ever since the founding," said James Sonne, a Stanford Law School professor and the director of the Religious Liberty Clinic at the university.

The addition of drugs has made that question more complicated. A 1990 Supreme Court ruling against two members of the Native American Church who were fired after taking peyote during a religious ceremony prompted bipartisan backlash in Congress.

It led to the Religious Freedom Restoration Act of 1993. This was used by the Supreme Court in 2006 to rule in favor of a church that used ayahuasca, a sacramental tea made from two plants found in the Amazonian rainforest.

But those cases deal with federal laws. In California, where recreational (and before that, medicinal) marijuana is legal, cannabis churches cannot seek protection under the Religious Freedom Restoration Act. The law also only applies in states that have passed their own versions of it; California has not.

Lawyers for cannabis churches are arguing that marijuana is a sacrament that must be dispensed by religious institutions to ensure that the sourcing and the blessing of the product meets their standards. The courts must determine whether those practices are "analogous to mainstream faiths in terms of moral duty, ultimate concern, comprehensiveness, that sort of thing," Sonne said. The court also must determine whether the belief system in question is "sincerely held."

Jah has had success proving the sincerity of its religious beliefs in court, but not in proving that California's marijuana laws are discriminatory.

In May, San Bernardino County filed contempt charges against Jah for violating an order to stop dispensing cannabis. An undercover officer testified that he had visited the church twice in one day and paid for marijuana without any religious ceremony.

In a hearing in August, San Bernardino Superior Court Judge David Cohn ruled in the city's favor. He said he found the officer's testimony credible. But he had also found Rodriguez, who testified on the sincerity of her religious beliefs, to be a credible witness.

"Does that mean everybody in the church holds those beliefs? Of course not," Cohn said in court. "I think probably in every religion, every church, synagogue, mosque and temple throughout the nation there are members and attendees who are sincere believers in the religious doctrine and others who attend for a variety of reasons. Those ulterior motives of individual members of a congregation don't in any way undermine the legitimacy or sincerity of religious doctrine." 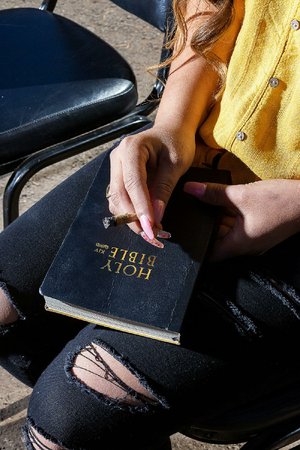 Print Headline: Cannabis as a sacrament raises some questions, concerns