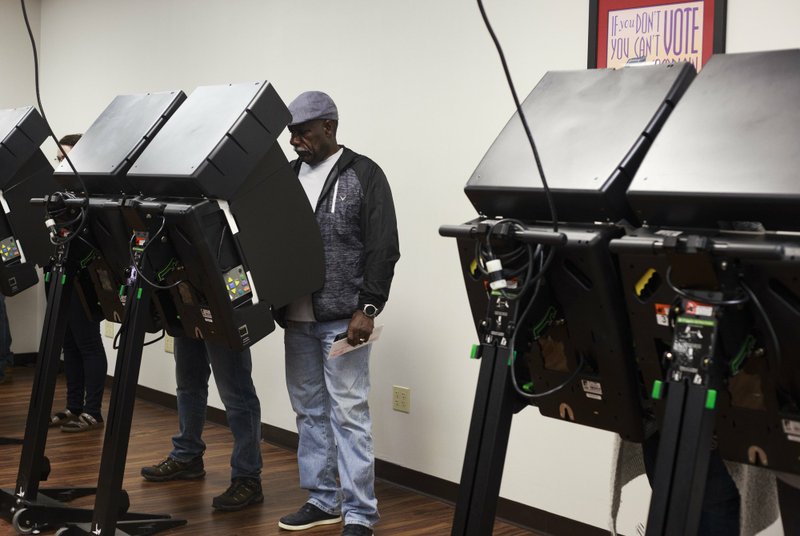 The Election Commission discussed having limited early voting in some locations for the March 3 party primary and nonpartisan judicial elections.

Early voting for the March 3 preferential primary, nonpartisan judicial general election and annual school election begins Feb. 18 and ends March 2. Washington County early voting locations will be posted on the Election Commission page at the county’s website — www.co.washington.ar.us — once the locations are set by the Election Commission. The deadline to register to vote in the March election is Feb. 3.

The "limited" early voting would open some election day polling places for the final day or two of the two-week early voting period starting Feb. 18.

Jennifer Price, election director, said having more early voting sites would be a convenience for voters and could lessen demand for voting machines in some vote centers on election day, allowing machines to be shifted to centers with a higher demand.

The only cost to the commission would be paying four or five poll workers for the extra days.

A site in Lincoln is a likely choice because it would be more accessible for voters on the west side of the county.

Price said city and school officials she has spoken with endorsed the idea, and it was well-received when she spoke at a civic club in Lincoln.

"It's a great idea," Spears said. "Everybody was very positive."

"I have about 150 employees, and I know they would appreciate the opportunity to be able to vote early where they work," she said. "We have teachers who drive from Fayetteville, Springdale and even Lowell. My assistant votes at the Cincinnati Fire Station on election day. If we work late or have an event at school, she may not be able to get home in time, or there may be long lines at the end of the day."

Spears said Lincoln schools cover a wide area of the western part of the county, and she supports making voting easier for those residents.

"Our school district is about 150 square miles," she said. "We have lots of folks who struggle to get home and then get out to vote."

Bill Ackerman, one of the two Republican Party representatives on the commission, said voters who use the Lincoln vote center on election day are more likely to vote early if they can go to the same polling place.

"My experience has been that no voter likes to change their voting location," he said.

"I like the consistency of using early voting locations that are also open on election day," he said.

Deitchler said increasing voters who use early voting makes election day voting easier, particularly in some of the busier centers in Fayetteville and Springdale.

For the 2018 general election, the commission had seven off-site early voting locations with two in Fayetteville, two in Springdale, one each in Prairie Grove, Elkins and West Fork. Early voting was also available in the County Clerk's Office in Fayetteville.

The need for voting machines reflects the increasing number of registered voters, she said. Washington County had 122,830 registered voters in June 2016, and now has 130,261, according to the County Clerk's Office.