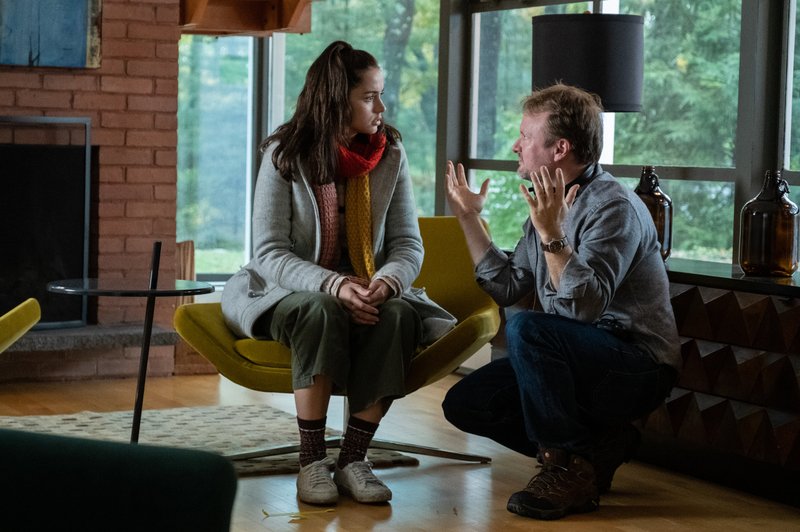 Director Rian Johnson works with Ana de Armas on the set of Knives Out.

By the time you hear the line "I suspect foul play and have eliminated no suspects," as uttered by Mr. Benoit Blanc (Daniel Craig), a winsome private detective by way of Louisiana, which occurs midway through the first act of Knives Out, you well understand Rian Johnson's modern murder mystery is kicking into high gear. It is also around this same time when you realize, sitting ecstatically in the audience, just how much you desperately needed to see a movie like this now.

It has been a difficult year in many respects -- nationally and internationally -- and the drumbeat of our impending doom from environmental collapse is only getting louder, as our systems of government get whittled down into so much kindling for the bonfire of the corporate vanities. The country is particularly torn up and divided, along all sorts of invisible lines, partisan and non-, and we are all gearing up for what certainly has to be an extremely difficult and bruising election year in which whatever side loses will feel as if their country has gone straight off the cliff.

Literal escape seems increasingly impossible, so finding it in the multiplex is perhaps the next best thing. Making its world premiere at the Toronto International Film Festival in September, Knives Out earned the most universal praise of any film playing the fest, and it did so for two primary reasons: It's fun and clever as hell.

Rian Johnson knows from rough patches. Though he downplays it, the grinding personal social media attacks on him from irate fanboys after the release of his last film Star Wars: The Last Jedi, has to have taken a toll. That he has rebounded from that negativity to make easily the most thrillingly fun film of the year suggests maybe there's a wee bit of hope for all of us.

I spoke to him via phone from a friend's house whose many corridors and secret doors seemed all too apropos to the film's vibe ("Perfect," he said brightly, "we're on theme!"), and talked about the complexities of working within the mystery genre, making use of the political subtext, and what he considers the misinterpretation of the fanboy backlash.

I was lucky enough to be at the premiere of the film at the Toronto International Film Festival in September, and when [Program Director] Michael Lerman introduced you on stage, you came bounding out and jumped into his arms. It seemed like a moment of pure joy.

Everything about that night was joyful, man.

Safe to say it felt like a release after some tough times with the fanboy set?

I guess, sort of. At the same time, I feel like I always have to kind of give a little bit of corrective to the perception that I've just been getting slings and arrows thrown at me on the internet for the past year. The reality is, it hasn't really been like that. I think that is kind of sexy, so it gets talked about a lot. But my overall experience the last few years has been absolutely fantastic with the fans: 95% of my interactions regarding Star Wars online are with absolutely lovely people who are engaging with it really deeply. That was all a really fantastic experience for me. But this has been a tremendously joyful one, you're right. Coming out on that stage and presenting this movie, which was such a joy to make, everything just added up to that night feeling like a big, big joyful dance. It was fun.

The premiere was this riotous affair with an audience including the cast and crew, and everyone primed for a great time. Have subsequent screenings been as totally affirming as this one was?

Every audience is a little different, but yeah. We just screened it here last night. Basically, I always try. Even if I go to dinner during the screening, I try and get back for the last half-hour of the movie. God, man. It played. It was really hot. I mean, TIFF was bonkers. But at every festival we've taken it to, every audience we put it in front of ... the movie, it plays, man.

One of the really striking elements of the film is the way it establishes its genre, then shreds everything into tatters, before somehow reforming it entirely by the ending. Can you speak about the process of crafting this screenplay?

I actually have a weirdly clear answer for that: My approach to all this was having a love of whodunits. Knowing what I love about whodunits and wanting to put all that into a movie, and yet, also kind of feeling like agreeing with Hitchcock about the fundamental weakness of a whodunit being a big buildup to one surprise at the end, and that not being a great engine to drive a movie. And so the idea of could you basically, put the engine of a Hitchcock thriller into a whodunit? Where, it was always formulated as something that begins as a whodunit, turns into kind of a Hitchcock thriller, and then turns back into a whodunit at the end. Or more accurately, then it was a whodunit the whole time and the Hitchcock element of it was a misdirection, which seemed really fun to me for a lot of different reasons. It was a combination of trying to really get to the heart of what I love about a whodunit and then really trying to put it in another gear in terms of the storytelling being driven by suspense and empathy, as opposed to by clue gathering and puzzle-solving.

I think there's a misapprehension about the genre that the murder is somehow something the audience should be able to solve given the clues in the film. That is definitely not the case here.

Well, that's always the case. That's why you don't want to hang your hat on, 'can you figure this out?' That would be very unsatisfying. You want something else in there that you care about that can draw the audience through, I think.

The particular twist here is that you seemingly solve the mystery about a third of the way in, and it becomes another sort of mystery altogether.

That's always fun, isn't it? I just saw Parasite recently. The fact that the movie keeps kind of reinventing itself sequence-by-sequence almost, but it doesn't lose you. You know, you're with it all the way through it, and it adds up to something cohesive at the end. I think that's always like a little magic trick when you can pull that off.

Were you at all worried the 'murder mystery purists' would somehow rebel against this idea?

No, not really. I mean, first of all, I feel this in relation to whodunits. I feel this in relation to other genres, as well. I feel like anyone who gets dodgy in terms of the rules, any kind of purest rules of the genre, started as this and it should stay as this, they're usually full of [it]. You know, they usually don't actually know the source material. So anyone who is arguing that, definitely about whodunits, has never read Christie, who was the most meta, flip-everything-on-its-head [writer], just to screw with the audience. Playful to the point where very famously, one of her early books, The Murder of Roger Ackroyd, she pulls a meta-twist that is so outrageous, that it had readers at the time, furious. So for me, the ultimate homage to the "classic" whodunits of Christie is to use every trick in your tool box to keep the audience guessing, make them feel like they don't know where the ground is under their feet. Clay, man.

It still ends in a way that's supremely satisfying.

It's always satisfying if it connects up to everything throughout the entire movie. And that's one of the essential pleasures of the genre for me. If you talk about the beginning, breaking down whodunits and figuring out what's fun about them. There is just something about that last denouement sequence, where everything comes together. And the more you can see into the previous two hours where little things come to fruition and pay off, and you realize the significance, it's that feeling of finishing a crossword puzzle. Again, it's not so much about guessing it or about being ahead of it or behind it, it's just something for the human brain. It's incredibly satisfying seeing a shape click into place.

I would be remiss if I didn't touch on the political subtext of the film. It doesn't take sides, exactly, but it certainly seems topically significant.

Obviously, the movie is not primarily a political movie, not a message movie [with] a subtle political subtext. [But] it engages with the culture right now, and it has a perspective on it. That, to me, was one of the big appeals: Let's take a classic whodunit and really set it in 2019, not just giving it a modern skin but having each of the characters be something we'll recognize and having it engage with what's happening today. Sadly, that's what's happening. Yeah. I think it's good to see this stuff presented in a way where you can to some extent, have a laugh at it. I think the movie has a perspective on all this stuff, but it also doesn't let anyone off the hook.