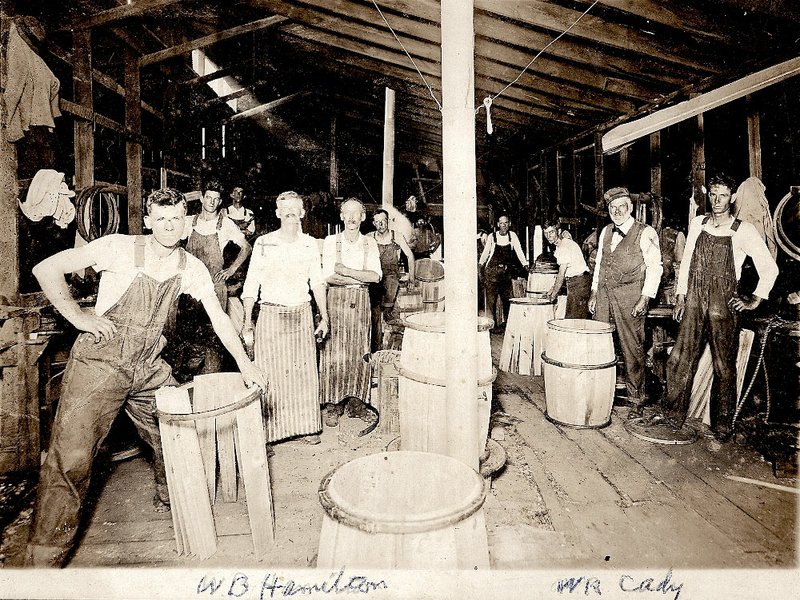 Photo courtesy of Dorothy Hamilton Lynch The W.R. Cady Cooperage building was built about 1900 to make barrels for his extensive apple business.

Rogers is growing -- and in the process, it's losing historic structures downtown. These buildings hold many memories for those who grew up in Rogers and their families. Some of the buildings were deteriorating from a century of aging, while others were not economically feasible to retain. I am very much in favor of property rights and do not blame anyone for removing these historic structures, but it is sad to see them gone. Here are the stories of three that were recently demolished:

The magnificent house at the southeast corner of Arkansas and Poplar streets had been there for 137 years, and generations of people had passed and admired the structure, but what was the history of this home? Here is the story that began just before the Civil War.

In 1858, John Bell Steele, at the age of 20, moved to Benton County and found work at the Van Winkle Lumber Mills out near War Eagle. During this time, he met Mary Van Winkle, affectionately known as Mollie, who was the daughter of the lumber king of the region, Peter Van Winkle. Just three years later, the Civil War began, and Steele became commander of a Confederate cavalry company. He fought courageously in many of the bloodiest battles of the Civil War, including Pea Ridge, Wilson's Creek and Vicksburg. He was captured twice and wounded several times but continued to fight gallantly until the end of the war. During his four years of fighting, Steele, known to his friends as Captain Jack, continued to write letters and poetry to Mollie.

After the war ended, Captain Jack came home and resumed working for Peter Van Winkle. Before and after the Civil War, virtually all of the lumber and millwork in Northwest Arkansas was produced by the Van Winkle Mills, including Old Main at the University of Arkansas, the rebuilt Elkhorn Tavern at Pea Ridge and the Peel House in Bentonville.

In 1866, Captain Jack and Mollie were married, and for several years, they operated mercantile businesses in Springdale and War Eagle and managed the three-story Van Winkle Hotel in Fayetteville. They also produced three sons, all of whom became outstanding citizens.

In 1881, the Frisco Railroad arrived, and the city of Rogers was founded. Captain Jack and Mollie moved to Rogers to help develop the new town and built a most fabulous and imposing home -- patterned after the Van Winkle family home at War Eagle -- at the corner of Arkansas and Poplar streets. The lumber came from the Van Winkle mills, and it was reported that only the most perfect boards and millwork were used in its construction. Captain Steele was a participant in all of the early activities of Rogers, serving both as mayor and justice of the peace. He was secretary of the first canning company, involved in several grocery and mercantile businesses, and at the time of his death in 1903, the manager of the Rogers Milling Company. (The building today is the home of Ozark Beer Co.)

Sadly, this home was demolished recently, and now only a vacant lot remains along with the memories of the hopes and dreams of the folks who lived in it.

The beautiful building at 408 W. Walnut St. recently occupied by the Callison-Lough Funeral Home is now gone, but what is the story of this stately structure? H.L. Stroud founded Rogers' first department store in 1884, just three years after the birth of the town. The Stroud Mercantile Store was very successful, and about 1898, H.L. Stroud built a fine new home in the 400 block of West Walnut. The home was described in an article by Charley Stroud and Lola Morgan in an early edition of the Benton County Pioneer: "He built a fine new home for his family. He loved and owned many fine horses and carriages. The long brick building along the alley housed his horses and carriages. The upstairs was the servants' quarters."

Sometime around 1920, H.L. Stroud moved to St. Louis and sold the beautiful home. Carolyn Duty Banks posted on a popular Rogers website: "My grandfather, Will White, and Albert Callison were cousins, and they bought the house ... for their funeral business. It was a gorgeous home even back then." A.D. Callison and Will White began their business in Rogers in 1912 at 115 W. Walnut St. with a paint and wallpaper store downstairs and a funeral home upstairs. Callison moved his entire undertaking operation to 408 W. Walnut St. in 1932.

The carriage house in back of the main structure was used by Callison for storage for his paint store and funeral home. One unique feature that was added probably in the 1930s was a hand-operated freight elevator that was used until the business closed in 2014.

For many years, the upstairs of the home was used as an apartment to house the funeral directors. Among others, W.R. Croxdale lived in the apartment and recently, Jason Engler resided there from 2008 until 2011. Jason is a past member of the Rogers Historical Museum Friends' Board of Directors. I knew that Coin Harvey was prepared for burial there upon his death in 1936, but I asked Jason in a recent interview about other important dignitaries that had been cared for at Callison's through the years. "There have been thousands of people cared for here, including many famous people. The list reads like a 'Who's Who' of Rogers and Northwest Arkansas."

I asked Jason if he knew of any strange or mysterious occurrences associated with the Stroud home. "When I lived there and was away on trips, people would see lights and folks moving around in my apartment," he said. "There was never any evidence of an intruder, but it was strange. Probably the most interesting occurrence was the appearance of a lady dressed in blue at various funerals over the years. No one ever knew who she was, why she was there, or where she went."

The Callison Funeral Home has been associated with names such as McKinney, Porter, Foster, Croxdale and Lough. In 1984, Max Lough bought the Callison-McKinney Funeral Homes in Benton County including the one in Rogers. The name was changed to Callison-Lough, and the name remained the same until 2014. Lough sold the business in the late 1990s, and it was acquired by Dignity Memorial in 2007. The service continued on West Walnut until 2014, when Dignity Memorial, the parent company of Callison-Lough and Rollins Funeral homes, closed the old Stroud home. They consolidated their Rogers operations to Rollins Funeral Home on Arkansas 102 and placed the Stroud home up for sale. The historic home was demolished earlier this year.

The sprawling building that stood by the railroad tracks on East Poplar Street for about 119 years looked like a red barn that had many additions through the years -- and it was. It had been the home of many businesses through the years, but most recently the the Cottage at the Barn, an antique and memorabilia store. What is the story of this remodeled barn that stood in Rogers for all of these years?

According to my research, this barn-like building was most likely built in the early 1900s by W.R. Cady to make barrels to market apples from his vast apple orchards. As late as 1925, the building shows in directories as the W.R. Cady Cooperage Shop. So who was W.R. Cady? He was an extremely successful businessman who was instrumental in the formation of early Rogers. He had the W.R. Cady Grocery and General Merchandise on South First Street in 1893. He owned extensive apple orchards all over present-day Rogers and surrounding areas. He originated the idea of the Apple Blossom Festivals during a meeting at the old Opera House in 1923. The idea was met with much enthusiasm, and the first Apple Blossom Festival was held that year with the election of an Apple Blossom queen and many maids of honor and a parade. The event was attended by the governor of Arkansas and was the largest gathering ever in the history of Rogers with between 15,000 to 20,000 folks attending. Cady's mansion still survives on Monte Ne Road near New Hope Road.

This old barn building was old and deteriorated, but it was important in the development of Rogers, and now it is gone.