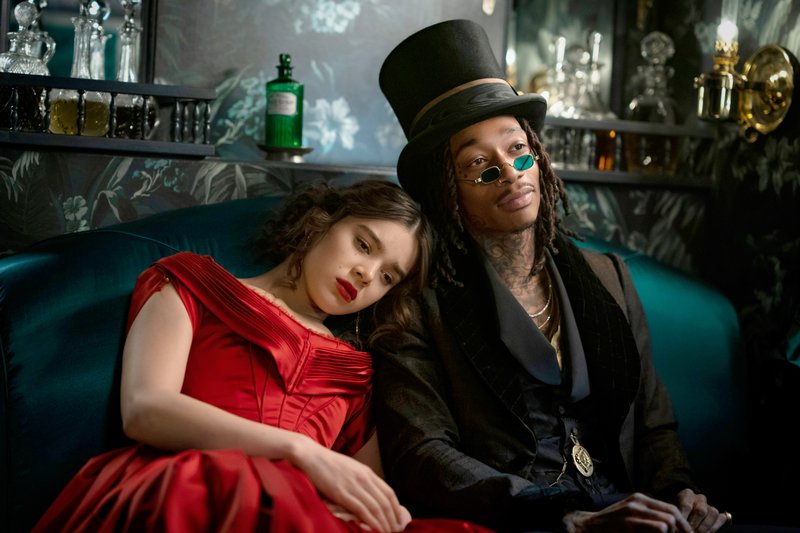 In "Dickinson," Hailee Steinfeld plays Emily Dickinson, a millennial misanthrope centuries before her time, opposite Wiz Khalifa as Death. MUST CREDIT: Apple

After a long gestation period, Apple TV+ finally launched. In just about all of its offerings — starting glamorously yet unevenly with The Morning Show, you don't see much in the way of identity or overall sensibility, but you can see Apple's money being well spent on quality concepts from decorated TV pros, starring actors you probably want to watch. The auxiliary shows are also name-brand affairs, such as a reboot for Oprah's book club and children's programming from the Sesame Workshop and the Snoopy empire.

All the money in the world still can't buy the elusive combination of luck and chemistry that makes truly terrific TV. Apple TV+ is lush but often plain. Here are a few reviews of shows that caught my attention.

History portrays her as a quiet recluse who never left her father's house; Smith has reimagined Dickinson as a rebellious and frustrated genius — a young woman resisting domestic drudgery and testing the social and gender boundaries that surround her, while scraps of her writing float past in her vivid imagination. Even Death himself drops by for an occasional conversation. ("Because I could not stop for Death —/ He kindly stopped for me.")

Hailee Steinfeld (all grown up since True Grit) contributes a bang-up performance as young-adult Emily, the original goth girl in petticoats, a millennial misanthrope centuries before her time. She's adored by her father (Toby Huss), who nevertheless throws a fit whenever she tries to publish her writing, and deplored by her mother (Jane Krakowski) and sister, Lavinia (Anna Baryshnikov), for not doing her share of the womanly work.

After this summer's pride of looking back at the 50th anniversary of the Apollo 11 lunar landing, creator Ronald D. Moore (Outlander) starts his space-race drama For All Mankind off with a risky and even depressing premise: In the summer of 1969, a month before Neil Armstrong and crew are set to blast off, the Soviets land on the moon and plant their hammer-and-sickle flag. America watches the live broadcast in humiliation as a cosmonaut dedicates his first step to "my people (and) the Marxist-Leninist way of life." President Richard Nixon throws a fit, NASA officials scramble to save their jobs and even the Apollo 11 mission, launched with a second-place sense of grimness, is given a catastrophic twist. Ugh — I know there are people who dig alternate histories, but who needs this kind of downer right now?

Joel Kinnaman (The Killing) and Michael Dorman (Patriot) star as fictional astronauts Ed Baldwin and Gordo Stevens, who served on Apollo 10, which orbited the moon before the Soviets got there. In popular opinion, Ed is the commander who could have landed first, even though NASA had not planned the mission that way.

Nixon authorizes another dozen or more Apollo missions, including plans to build a quasi-military science lab on the moon's surface. Then the USSR serves up another surprise: They send a woman to the moon. (A woman!)

Here, Moore and company envision a hastening of America's regard for gender equality, as NASA is ordered to find and train a crew of female astronauts, one of whom happens to be Gordo's wife, Tracy (Sarah Jones). Less about discriminatory hurdles, For All Mankind wisely shifts its emphasis to incremental and mutual triumphs — not only for what the women capably accomplish but the way the men learn to support and work with them. That sense of teamwork not only saves the space program, but it may well salvage the show.

Of all the ways to admire Apple TV+'s deep cash reserves, perhaps none is more visually striking than See, a dystopian thriller from creator Steven Knight (Peaky Blinders), set in a future North America long after a disease wiped out all but about 2 million humans worldwide and left everyone genetically blind from birth. A tribal society has emerged, dependent on the four remaining senses but still remarkably color-coordinated in their raggedy, post-apocalyptic garb and decor. Sight has become a heretical concept. Even a TV critic could get his throat slit just for joking about it.

Jason Momoa, who brings a certain cerebral quality to his brawniest roles (whether as Khal Drogo in Game of Thrones or as Aquaman in DC's superhero flicks), delivers an energetic yet tender performance as Baba Voss, the chief of the peaceful Alkenny tribe. Their forested mountain village is attacked by a mercenary army sent by Queen Kane (Sylvia Hoeks), a tyrant obsessed with tracking down a vigilante who can see.

It so happens that Baba Voss has recently married the fugitive's ex-lover (Hera Hilmar as Maghra), who is about to give birth to the mystery man's twin son and daughter. They're born with sight, and Baba Voss protects and raises them as his own, with guidance from the tribe's spiritual leader, Paris (Alfre Woodard).

The pilot episode is fast and often exciting (though violent, for sure). Less impressively, the next two episodes lapse into formula as See starts to behave like any old cable drama. As the show leans heavily on gore and predictable plot points, it proves that, at the very least, Apple has figured out the dirty truth of making TV: Even the strongest story pitches can blindly wander into a puddle of mediocrity.