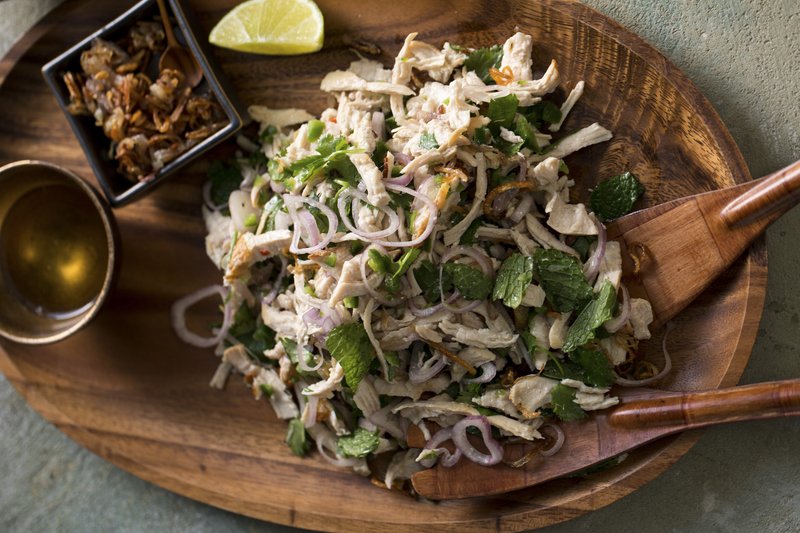 In that pause before pie, when the bulk of the Thanksgiving meal is over and it's time to stack gravy-smeared plates and carry them to the sink, every cook is happy.

It's not only that the labor of cooking for a crowd is over and that everyone is well-fed. It's the endless possibilities of that turkey carcass on the counter. A cook looks at a wrecked bird and sees salads and soups, tacos and dumplings, sandwiches and noodle dishes, already halfway there.

After a Thanksgiving meal, everything you need for a good meal is at your fingertips. At my apartment, that means Parker House rolls, mashed potatoes, roasted vegetables and a stuffing made with onions and sweet Italian sausage.

I don't have much counter space or the luxury of a second refrigerator, which means there's no putting this off: I start breaking down the turkey right away before Thanksgiving dinner is even over. It is, just like roasting and carving the bird, a part of the ritual.

While the water is boiling for coffee, I cut the remaining meat and pack it up, wrapping some for guests who'd like to take it home. Then I put the carcass in a stockpot and cover it with water, tossing in a halved onion, a carrot and any herb stems saved from the day's prep.

Through dessert, and the post-dessert drawing and painting sessions with my nieces and nephews that follow at the coffee table, the stock simmers along quietly and unattended. After a couple of hours, I'll strain the liquid and set the hot carcass aside. When it's cool enough to touch, sometime before I go to bed, I'll pull any meat that remains and get it into the fridge, along with the stock. By then, the carcass has nothing left to give, and I can get rid of it.

This strategy of breaking down the turkey means you're more likely to use all of its parts and makes the refrigerator appear like the organized walk-in of a tiny, turkey-loving restaurant. The rest of the year, it's all raw vegetables in various states of freshness and jarred condiments, but peer in the morning after Thanksgiving, and you'll see labeled containers of homemade, gelatin-rich turkey stock and slices of cooked dark and white meat, all ready to be turned into the special of the day.

These are building blocks, the setup for at least three excellent meals that go well beyond warming up a plate of leftovers in the microwave (its own, distinct pleasure, to be sure).

On the first day, when the meat can still be enjoyed as is, it's easy to pull the roasted pieces into thick shreds and put together a turkey salad.

The turkey stock, strained and kept in the fridge, is good for any kind of soup on the second day of leftovers. I take inspiration from my friend Whitney Reynolds, who comes from Tennessee. Her family makes turkey and noodles on Thanksgiving Day, serving it alongside the roasted meat and vegetable dishes.

At my table, this would be considered radical, but after Thanksgiving, there are no rules.

The noodle dough -- the recipe comes from Reynolds' father, Jeff Reynolds -- can be put together quickly, by hand. Rolled out to about the size of a piece of pie dough and cut into tiny batons, as long and thick as french fries, it's left out for hours to firm up and dry out, to get ready for a long simmer.

The noodles rehydrate in boiling turkey stock, bubbling away for about a half-hour, until they are tender and sticky-edged, infused all the way through with the flavor of roasted turkey. The stock itself reduces in that time and thickens, landing somewhere on the texture dial between soup and gravy.

Reynolds, a noodle purist, insists on serving the dish simply, without meat or herbs or any such adulteration in the sauce, just some generous grinds of black pepper. It is deeply comforting this way, an ode to roasted turkey with no roasted turkey in sight. But if you've got excess meat in the fridge, you might see this as another opportunity to serve it, shredded and simmered with the noodles.

This brings us to Day 3 of leftovers, and to the least celebrated part of the turkey: the scraps of meat pulled after making stock, which are far less substantial than the roasted meat.

Crisp them patiently in a cast-iron pan, and they could top rice or tortillas with a squirt of hot sauce. But I had pav bhaji on my mind because I always have pav bhaji on my mind. The Indian dish is usually made from a spicy mash of vegetables, served with buttered, toasted buns.

Ginger, garlic and green chile zap the turkey with warmth and flavor, as do crushed tomatoes and garam masala. To serve it, I press buttered potato rolls into a hot pan, until they are crisp and brown. When it's time to eat, everyone makes sloppy, delicious tartines, piling the bread with a spoonful of turkey, a little chopped onion and cilantro, and a squeeze of lime.

It's a dish I would never have found my way to, except in the aftermath of Thanksgiving, with a fridge full of semi-organized leftovers and an impulse to not waste any of them. Now, it's a tradition.

Divide the sliced shallots: Soak one-third of the shallots in cold water for about 10 minutes; drain through a mesh sieve and set aside.

Heat the peanut oil and fry the remaining shallots, mixing occasionally, until golden brown. Drain through the sieve, reserving shallots and oil. (Do not press on the shallots as they drain. They will clump together.)

In a mixing bowl, toss together soaked raw shallots and turkey meat. Add lime juice, salt, jalapeno and 2 teaspoons reserved oil from frying shallots, and mix well. Set aside to marinate for 10 minutes. Add 1 to 2 tablespoons of fried shallots, along with the herbs, and mix well. Taste and adjust with salt and lime juice as needed. Serve with any remaining shallots and shallot oil on the side. 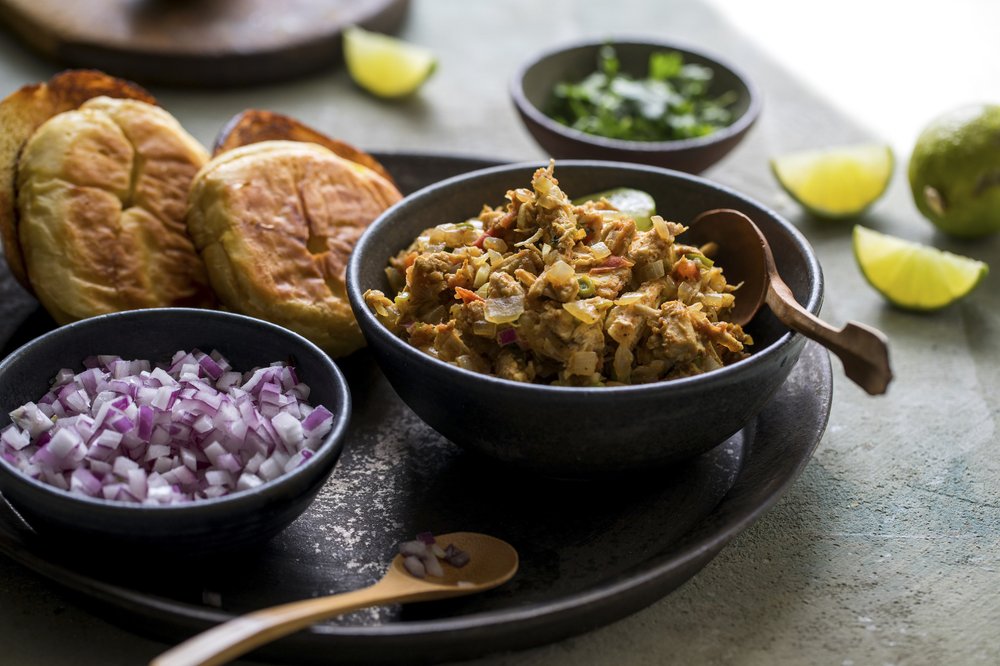 Heat 2 tablespoons oil in a cast-iron skillet over medium-high heat, then add pulled turkey and let cook until it becomes light brown and crisp in places, stirring occasionally. Season lightly with salt, then scrape meat, and as much of the browned pieces at the bottom of the pan as you can, into a small bowl.

In the same pan, without washing it, add the chopped onion and 1 tablespoon oil, and turn the heat down to medium, scraping up any remaining turkey meat and mixing it into the onions. Saute until the onion is very soft and translucent, about 5 minutes, then add the garlic, ginger, serrano chile and turmeric and saute for another 2 minutes. Add turkey, tomatoes, peas and ⅓ cup water, and stir well. When almost all of the liquid has evaporated, and the peas, if using, are tender (about 8 minutes), add garam masala and a generous squeeze of lime juice. Mix well and loosen with a splash of water if the pan is starting to get dry. Simmer for 2 minutes. Taste and adjust with salt and more lime, if needed, then turn off the heat.

Open the rolls and lightly butter them.

In a separate pan, over medium heat, place the rolls cut-side down and let them sit untouched until they're evenly golden brown; flip to lightly brown the other side. Transfer rolls to a plate. Garnish the turkey mixture with chopped cilantro and onion, and serve warm with toasted rolls and remaining lime on the side. (Alternately, transfer the turkey into a serving bowl and serve with onion, cilantro and lime in separate bowls on the side.) 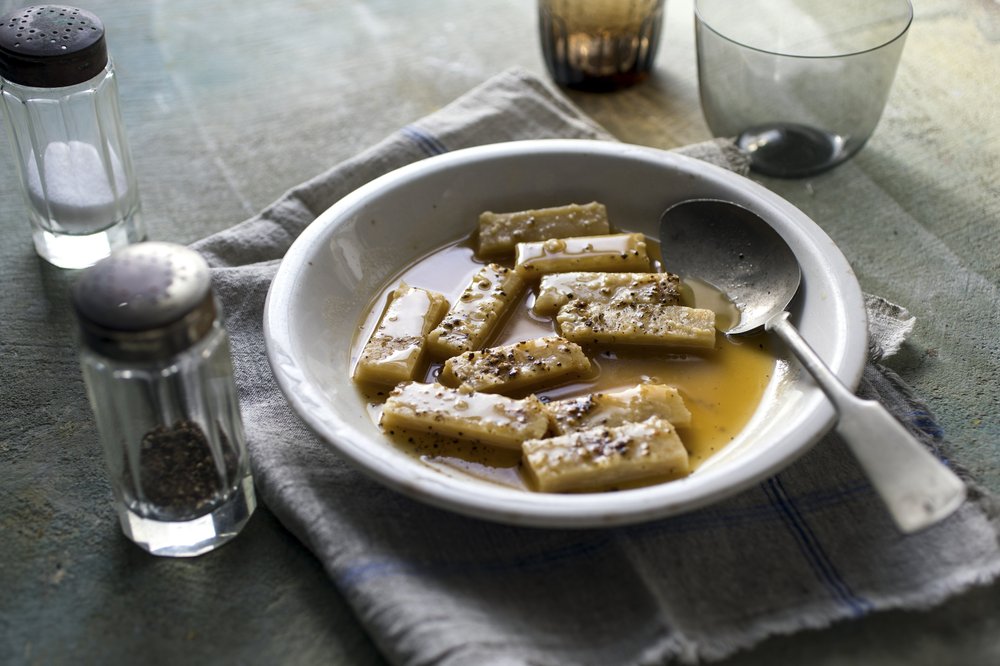 In a separate bowl, whisk together yolks, butter and cream, then slowly add to the dry ingredients, beating together with a fork. When the dough gets too stiff for the fork, use your hands to mix and knead in the bowl until dough is yellow and smooth. Wrap well with plastic wrap and transfer to the refrigerator for about 1 hour.

Flour a work surface, and roll out dough until it's about ¼ of an inch thick, dusting with more flour as needed. Use a pizza wheel or long knife to cut the dough into thick noodle shapes measuring just under 2 inches by ½ inch. Spread cut noodles out on lightly floured parchment paper, cover with a clean dishcloth and let sit out at room temperature for about 6 hours, or overnight.

In a large pot, bring turkey stock to a hard boil, then add the noodles, stirring gently. Boil until noodles are moist and tender all the way through and the broth has reduced and thickened like a gravy, about 30 to 40 minutes. If adding turkey meat, stir into the pot in the last 10 minutes of cooking. Taste and adjust seasoning with salt and black pepper and serve in shallow bowls.

Print Headline: RECIPES: Leftovers make the days after Thanksgiving just as sumptuous as the Turkey Day