Real-life gumshoe sleuths in a podcast 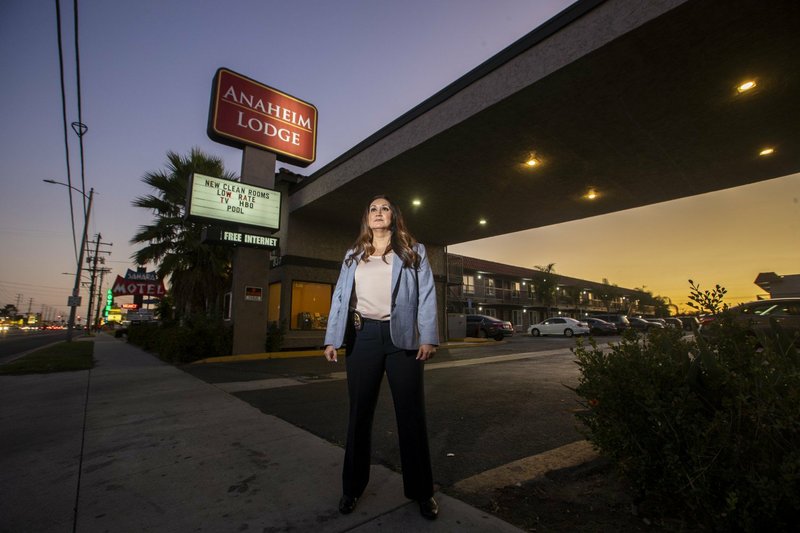 Anaheim Police Detective Julissa Trapp stands in front of the Anaheim Lodge in Anaheim, where murder victim Jarrae Estepp, 21, of Ardmore, Okla., left her belongings in room 217. The case is explored in Detective Trapp. (Photo by Allen J. Schaben, via Los Angeles Times)

Detective Julissa Trapp is a modern-day gumshoe, a tough-as-nails investigator in Anaheim, Calif., who knows when to soften her voice and bat her eyes to get what she wants. She's dogged and determined enough to break an unwritten rule in sleuthing: Never promise survivors that you'll catch the perpetrator because sometimes you won't.

Anaheim, the home of ­Disneyland, is supposed to be the happiest place on earth. Its dark side is exposed in a new podcast from the Los Angeles Times and Wondery, and reported by Dirty John creator Christopher Goffard. The first episode of Detective Trapp introduces Trapp and the story starts to develop.

When a woman's body turns up at the local garbage facility, Trapp and her crew are called to investigate. Trapp is soon consumed by the case, eventually learning that the death is the work of an Orange County serial killer who targets prostitutes.

The podcast, though, is really about Trapp, who knew she wanted to be a cop all her life but had to fight for the chance to have a career in a male-dominated line of work. Goffard has proved he's a master of storytelling with his previous hit podcast — if you haven't yet listened to Dirty John, stop what you're doing and binge it — and just two episodes into this one, it's shaping up to be a good one. The third episode is due out today.

MCBRYDE ON THE MOVE

McBryde even has her first podcast appearance behind her. She and Garth Brooks taped an episode of the USA Today Network's Country Mile podcast, in which they talked about their songwriting methods in front of a live audience.

It's described like this: "Thousands of country music fans packed into Belmont University's Curb Event Center to hear one of country's biggest stars ever, Garth Brooks, and one of its most exciting voices, Ashley McBryde, talk about the songwriting craft. There are lots of laughs, a few tears and a wealth of career advice for any aspiring writer."

Here's the link to hear the episode: arkansasonline/1126ashley/

It would seem she's busy enough, but now she will embark on the "One Night Standards" tour, starting Jan. 30 in Birmingham, Ala., and ending the first 10-city leg in April in Helotes, Texas. Her home state is not included in the tour's first leg.

It's still hard to accept that Prince Rogers Nelson is gone and that all we have left is a treasure trove of unreleased music that is being collected from the storied vault in his Minnesota estate, Paisley Park. While the Prince Estate is tasked with weeding through the songs, on Friday his survivors also are releasing a remastered version of his iconic album 1999.

Called the Super Deluxe Edition, the reissue consists of five CDs and one DVD. The CDs contain all the music previously released in 1982, plus 23 unreleased tracks including a recorded performance of the 1999 tour stop in Detroit on Nov. 30, 1982. The DVD contains an unreleased video of the 1999 concert in Houston from Dec. 29, 1982.

Once you digest all of that, check out the accompanying podcast, Prince: Story of 1999. The first episode, "My Mind Says Prepare to Fight," is available through podcast networks Stitcher, Apple Podcasts and Google Play. Produced by Minnesota Public Radio's The Current, the second of the four-episode podcast is out today. It can be streamed through thecurrent.org at 8 p.m. Tuesdays, and a printed version is also available.

Another superstar whose light is still brightly shining and whose life is dissected in a new three-part podcast from Chicago radio station WBEZ is none other than Beyonce, aka Sasha Fierce, aka Mrs. Shawn Corey Carter. The wife of Jay-Z is profiled by superfan Jill Hopkins in the new Making of Beyonce podcast.

Hopkins talks to Mathew Knowles, Beyonce's father and manager of her girl group Destiny's Child, to paint a picture of the star as a little girl with a big dream who performed in talent shows around Houston before hitting it big.

Listen to a preview here: arkansasonline.com/1126beyonce/

DO LANGE, DO LANGE

Remember troubled funnyman Artie Lange? He was among the cast of MAD TV back in the day and a cutup on SiriusXM's The Howard Stern Show for years before Stern tired of Lange's drug habit and subsequent arrests, parting ways with the comic in 2009.

Lange has had a rough time kicking the cocaine habit, but he has been sober for nine months and what does a desperate comedian do first thing? A podcast! Coming on Dec. 2, the podcast Artie Lange's Halfway House was originally teased on Twitter, where Lange posted a Carol Burnett quote: "Comedy is tragedy plus time."

Here's hoping Lange can laugh at himself without sabotaging his sobriety.

STICK TO THE SCRIPT

"Everyone thought Danny had gone missing. Toward the end of senior year she vanished, leaving family and friends devastated and confused including her closest friend in the world, Becca. Gaslight picks up years later when Becca and her new husband receive an unexpected visitor during breakfast."

The podcast is releasing new episodes every day until Thanksgiving, just so bored family members at the big feast can plug their ears and hear an entertaining story instead of drunken Uncle Billy's lame jokes. The podcast began Nov. 18.

Visit Qcode.org to try out their other podcasts, including Carrier, which sounds like a trip:

"What happens when a truck driver picks up a loaded trailer, but has no idea what's really inside? Tony, Grammy, and Emmy award winner Cynthia Erivo journeys down a dark and lonely highway in this original scripted thriller from Qcode and creator Dan Blank. With immersive audio techniques that create a dimensional listening experience, the audience is strongly advised to use caution, wear headphones if possible, and listen ... carefully."

Another from Qcode stars Rami Malek, who morphed into Freddie Mercury in the recent motion picture about the rock group Queen.

It's called Blackout: "A small-town New Hampshire radio DJ who fights to protect his family and community after the power grid goes down nationwide, upending modern civilization. A reluctant hero (Malek) must navigate this new world while providing safety for his family, and hope for the future."

Narrative podcasts such as these make me wonder, when does a podcast become an audiobook?

Have you listened to a really good podcast and want to recommend it? Write to me at [email protected]