Jig is up for Ozark trout 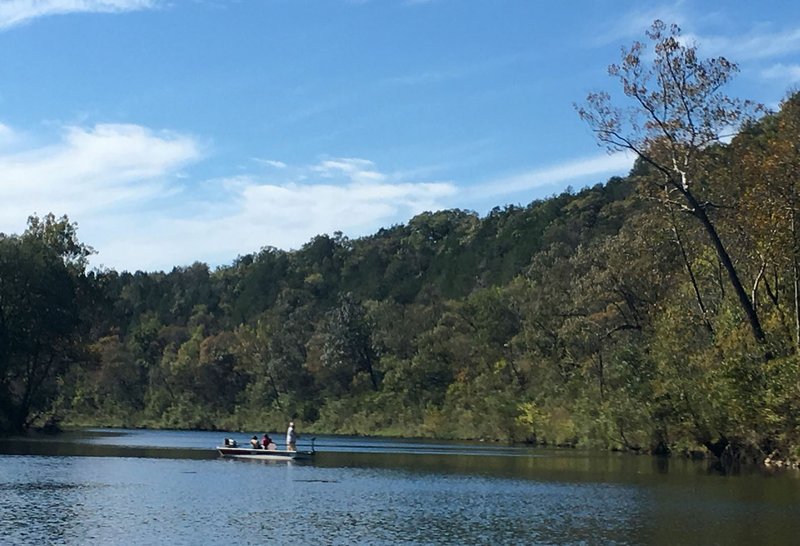 NWA Democrat-Gazette/FLIP PUTTHOFF Angler fish for trout on Oct. 29 2019 at the White River below Beaver Dam. Jigs work well for catching trout below the dam.

Trout take the bait when a simple little lure does its happy dance down deep.

A fishing jig is little more than a hook with a lead head and some hair attached. The little lures shine wherever trout swim, including the White River below Beaver Dam and Missouri's Roaring River State Park.

Below Beaver Dam, all trout between 13 and 16 inches long must be immediately released. The daily limit is five trout, but only one trout over 16 inches may be kept.

Marabou jigs, also called hair jigs, come in sizes for all kinds of game fish. Smaller is better when it comes to trout. Jig fishing is easy to learn, even for kids.

Aaron Jolliff, owner of Hook, Line and Sinker fishing store in Rogers, might be found fishing with his son, Hudson, on the White River. Both will be casting jigs.

"With kids, it's good because there's no right or wrong way to fish with jigs," he said. "No matter how you work a jig, it'll usually catch fish and sometimes lots of them. That's important with kids."

Jolliff likes a 1/16th-ounce marabou jig. Black or dark green are his favorite colors. Fishing with light line is key.

"A lot of people think I'm crazy, but to me 2-pound test is the best line. Most people use 4-pound, but 2 pound works best for me."

He casts his jigs with a limber 6-foot ultralight rod that has lots of shock absorption for bigger fish. A reel with a good drag is a must when using 2-pound line. 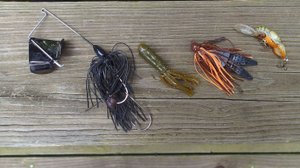 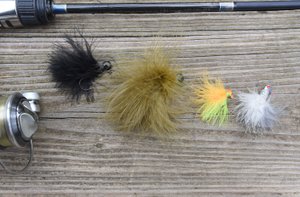 NWA Democrat-Gazette/FLIP PUTTHOFF Small jigs are a good choice for trout fishing at the White River below Beaver Dam, Roaring River State Park of any waters where trout thrive.

Below Beaver Dam, the White River may have current if hydroelectric power is being generated. Or there may be no current at all. Jolliff finds the fishing best if there's a little bit of current. He drifts with the flow, casting his jig and letting it sink a few feet. Then he reels in while making quick jerks of the rod tip. That gets the jig's dancing and darting.

When there's no current, Jolliff lets his jig sink to the bottom, then he retrieves it up through the water, again with a series of jerks and twitches of the rod tip.

"Sometimes I'll fish a jig like you would a jerk bait for bass. I'll twitch it a couple times, then pause and let it sink, then twitch it again."

The best trout fishing seems to be on sunny days, he added.

Deep into winter, if the water temperature at Beaver Lake falls to near 40 degrees, threadfin shad die by the thousands. Dead shad get sucked through the dam during power generation. Trout downstream in the White River gorge on them.

Savvy anglers use a jig that mimics the shad.

"When there's a shad die-off, I'll use solid white, or white with some gray," Jolliff said.

A key to catching fish is working a jig so the tail does the happy dance that gets trout to bite. That can be with a twitch of the rod tip, or letting a breeze do the work.

A little wind works wonders for Ron Blackwelder of Bella Vista when he fly fishes with jigs at Roaring River State Park, just over the state line near Cassville, Mo. The park allows catch and release fly fishing on Friday, Saturday, Sunday and Monday from midautumn through winter.

If the wind puts a little chop on the trout stream that bisects the park, Blackwelder casts a micro jig that weighs 1/125th-ounce. That's light enough to cast with a fly rod.

He fishes the jig about 3 feet deep under a strike indicator, like a bobber in fly fishing lingo. The chop bounces the indicator up and down on the surface. Down below the jig is doing its subtle dance.

A peach and olive colored jig, or peach and brown, are his favorite colors. If it's a breezy day, the jig is definitely up for trout at Roaring River.

Print Headline: Jig is up for trout