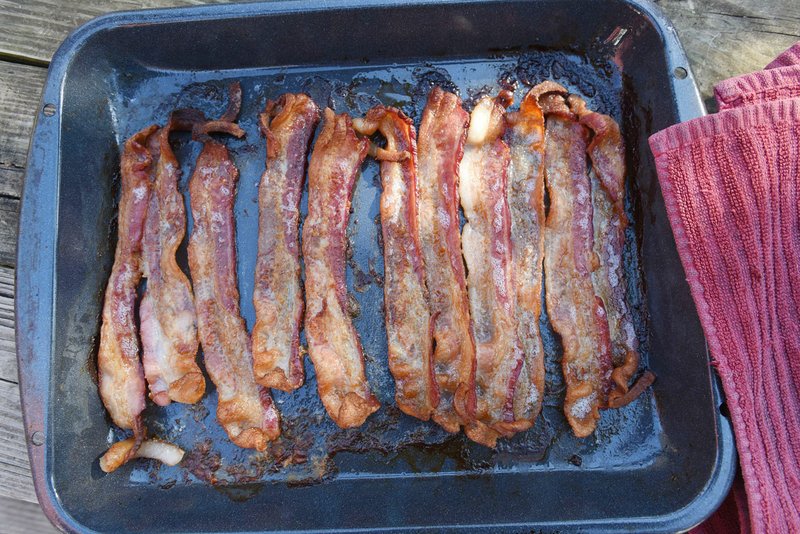 NWA Democrat-Gazette/FLIP PUTTHOFF Cook bacon in the oven and you may never fry it again.

Hank senior liked to sing, "Hey good lookin'. What'cha got cookin'?" The camp cookies here at Camp See No Deer may not be much to look at, but they make up for it with culinary creativity.

But a slice of tender venison alone on a plate does not a meal make, not after another day in the woods here in the middle of deer season. When the hunters become cooks at Camp See No Deer, dull side dishes get doctored up into delicious fare that'd make the editors jealous over at Southern Living.

We've got our favorites. Here are a few.

In the rib sticking department, a hearty side of tasty macaroni and cheese on a plate next to a grilled venison steak is sure to fortify the hungry hunters at deer camp. A box of mac and cheese gets a tasty upgrade with only a few extra ingredients.

At Camp See No Deer, we fix the mac and cheese mostly like it says on the box. Instead of using one-half cup of milk we use half of that so that wonderful yellow powder turns into a thicker cheese sauce.

Sprinkle bread crumbs, about half a handful, into the mac and cheese and stir. When it's dished up on a plate sprinkle on more bread crumbs and enjoy.

Then there's pork and beans. You won't see Paula Deen dump a can of beans into a bowl and say, "Come and get it y'all." No, she'd doctor it up first, maybe like we do at Camp See No Deer.

Bake at 375 degrees for 20 minutes. If there's no oven, just heating the doctored-up beans in a pan is tasty enough.

What's a real hunter's breakfast without bacon? It's just common sense that any hunter stepping into the woods smelling like bacon is going to attract more deer, right?

Try baking your bacon in the oven instead of frying. We haven't fried a pound of bacon in several seasons now. Baking is the ticket. What's best is, it makes your hunting cabin smell oh, so wonderful.

Lay out the strips of bacon on a baking sheet. It's OK to overlap the strips a bit so they'll all fit. Bake at 400 degrees for 20 to 25 minutes -- 20 if you like soft bacon or 25 for crispy. The oven here at Camp See No Deer bakes perfect bacon in 23 minutes. It may take a couple of tries to get the bacon to come out just as you like it.

Print Headline: Doctor's in the house for deer-camp cooks